Pizzas with attitude - packed with vegies 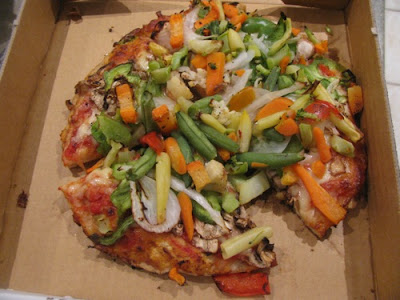 Last night we had takeaway pizza with my parents.  I had to post this photo because I was so amazed at all the vegetables on the pizza.  No wonder the place is called Pizzas with Attitude.  My mum found an online menu of poor quality, which made it hard to choose.  I had the Veg Supreme.  It had tomato, cheese, beans, carrot, onion, capsicum, mushroom, broccoli, cauliflower.  Even more amazing, was that the crust only had a small soggy corner.  Soggy crusts often go hand in hand with overloaded pizzas. 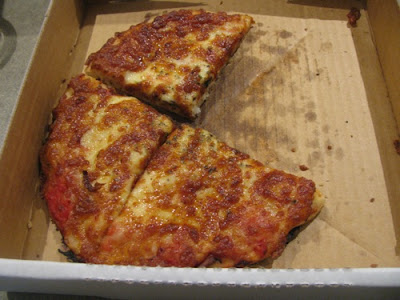 I also ordered the margherita (tomato and cheese) pizza for Sylvia.  It has a very generous covering of cheese but I liked it.  She didn't.  E was less enthused about his pizza (because my parents were as keen as him on such a spicy pizza) but he went for a carnivorous one that I didn't taste.  I did notice some differing views on the pizzas online. 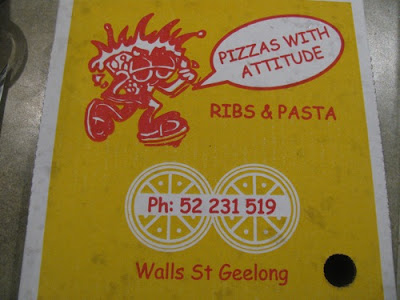 Based on my Veg Supreme pizza, I would be willing to return for another pizza.  E wants the Americana next time.  He brought home a menu so we could have a laugh over all the weird pizzas - Butcher's Delight, Wogarama, Nacho and Hot Doggy to name a few.  They also sell nachos, dips, pasta, salads and wedges and have stores in other locations in Geelong.