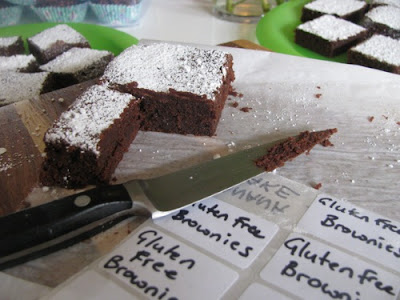 In this day and age, it is useful to have an simple, foolproof, gluten free cake that will wow and amaze.  For those of you still struggling for ideas, may I suggest this brownie?  It works for me.  It is fudgy, intense and melts in the mouth. 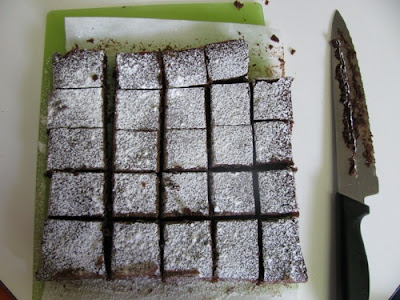 I don't take credit for it.  It was Donna Hay's recipe and mum was clever enough to substitute GF flour (Orgran) for the regular flour.  Since my sister and niece were diagnosed as celiacs, my mum has been great at experimenting with gluten free baking.  She has found that you can't always just substitute gf flour for regular wheat flour.  It works sometimes.  Especially when there is very little flour in a recipe.  Such as brownies. 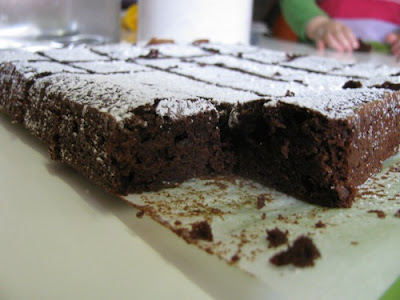 Donna Hay calls these standby brownies.  The ingredients are pantry staples.  I have seen cocoa brownies on blogs quite a few times but never tried them until now.  They are brilliant.  So soft.  So rich.  So delicious.  I was so impressed with them when my mum made them at a family dinner, I had to get the recipe. 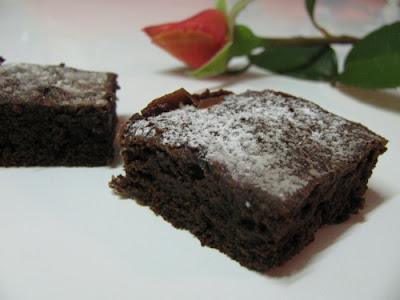 I first baked them for afternoon tea at a work meeting.  I baked them early in the morning.  Sylvia was fascinated by them as I cut them up before heading to work.  So interested in them that she nibbled on the small piece I gave her to taste and then lay on it as she reached across to take another piece.  Could that count as evidence that they make you crazy with desire? 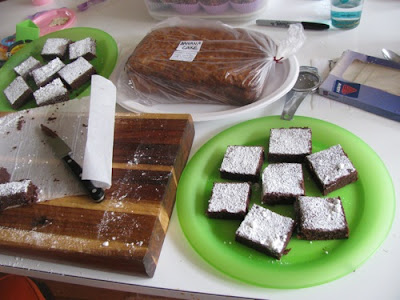 I made the recipe again on the weekend for the cake stall at the weekend fete.  I wanted something easy, impressive and suitable for restricted diets.  Most of them sold, and I was a little relieved to have a few leftover that I could take home.  I have a feeling that these brownies will become a favourite GF recipe.

Previously on Green Gourmet Giraffe:
This time last year: On the way to make burgers I discovered a mash!
This time two years ago: Mexican Lasagne and our Jetset Baby
This time three years ago: Leftover Cream and Paprikash

Preheat oven to 160°C (325°F).  Melt butter with sugar and cocoa together over a low heat or in a microwave (I did the later).  Mix in vanilla and eggs, whisking well.  Add in flour and stir well.  Spoon into a lined 20cm cake tin.  Bake for 30-35 minutes or until centre is just set.  Cool in the tin.  Dust with icing sugar if desired.  Cut into squares to serve.

On the Stereo:
We bring you a king with a head of gold: Dark Britannica II - Various Artists
Posted by Johanna GGG at 16:21