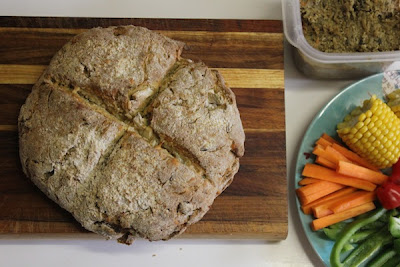 I'm feeling a little awkward on my computer right now.  You see, me and my new computer are still getting to know each other.  So here is a simple supper that we had this week.  What some like Lucy might call a nibbly tea.  I had leftover pate, cut up some vegies and baked a loaf of soda bread. 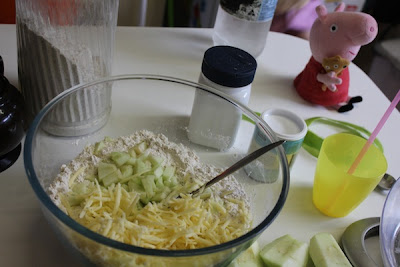 The soda bread follows a quest that is unravelling on this blog.  A quest for marrying apple and cheese.  At first I tried cake which was far too sweet.  Then I tried a couple of scone recipes that were either too sweet or not fruity enough.  This week I tried the combination in this soda bread.  The bread was not at all sweet, the chunks of apple was pleasant in a savoury sort of way but the cheese taste was missing.  I talked about it with my mum who suggested some parmesan cheese or sharp vintage cheddar. 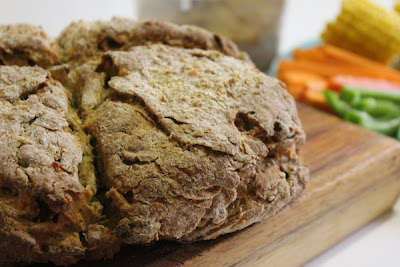 The recipe come from the River Cottage Cafe but there seemed to be a problem.  I love recipes on the internet because of its interactive nature.  Fortunately I read the comment about using either guiness or buttermilk rather than both (which the recipe seemed to require) which explained why a few people found it so soggy.  I also read someone say it was too salty and halved the salt.  My dough was a bit dry.  Sylvia thought I needed to put soda water into soda bread so I did.  It was then a bit damp but nothing that a bit of flour and a quick knead couldn't fix.  Next time a bit more salt and maybe a little more cheesiness.  (Or just go vegan and don't even bother about the cheese!)

Despite the lack of cheesiness, I loved this cheese and apple soda bread.  It was a warm rustic brown bread with a rough crust and barely sweet chunks of apple.  A perfect vehicle for the pate and a quick contribution to a lazy meal. 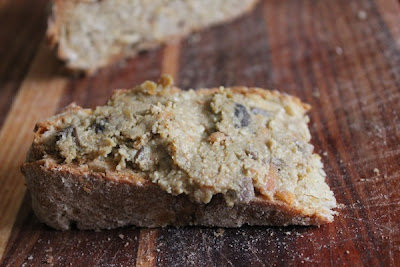 
If you are using milk and vinegar rather than buttermilk, mix them together and set aside for 5 minutes while you preheat oven to 230 C and lightly grease a baking tray.

Lightly whisk buttermilk (or milk and vinegar) with oil.  Mix remaining ingredients (except soda water) in a medium mixing bowl.  Make a well in the middle and pour in milk and oil mixture.  Add a little soda water if the mixture is too dry.  I added 100ml which was too much but I just kneaded briefly with some flour.

Shape into a round loaf on greased tray.  (The recipe said to set aside some grated cheese to scatter on the loaf but I forgot.)  Slash a couple of times.  Bake for 35-40 minutes.  Cool on a rack.  Eat warm or at room temperature.  Ours was still good the next night after being stored in a paper bag.

On the stereo:
Costello Music: The Fratellis
Posted by Johanna GGG at 21:30