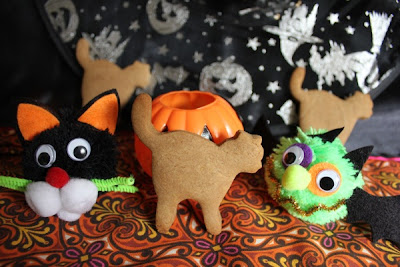 I wanted Sylvia to help make these chocolate gingerbread biscuits.  She wanted to as well.  Yet she took so long to eat dinner that I found myself making them all by myself on Halloween.  Ah well, we had had a fun day making Halloween pom pom characters and painting Sylvia's face green like a witch.  Then we watched the Wizard of Oz to be scared by the wicked witch.

I saw the biscuits in a cookbook at my sister's house last year.  It had lots of simple chocolate recipes that were comfortingly familiar to anyone with an Australian childhood like my own.  Classic recipes like pavlova, ANZAC biscuits, golden syrup dumplings and honey joys are made with chocolate.  And doesn't everything taste better with chocolate. 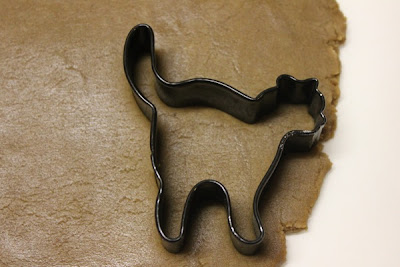 Then I discovered that the book is from New Zealand.  Just shows how many recipes we share with our neighbours (though maybe it explains why honey joys are called honey crisps).  Perhaps the book came from the Dunedin Cadbury World that I visited many years ago.  Nice to feel a connection even if watching easter eggs being wrapped at Haighs factory in Adelaide was more fun than the tour in Dunedin.

The first recipe I decided to try was the chocolate gingerbread recipe.  It seemed perfect for Halloween, given that we had a new black cat cookie cutter.  The pastry rolled out easily without having to sit it in the fridge.  I liked these biscuits.  They were fairly plain and did not taste strongly of either ginger or chocolate.  Great with a cuppa tea.  Just not as spicy and soft as my favourite gingerbread biscuits.  I love the idea. Maybe it needs some tweaking! 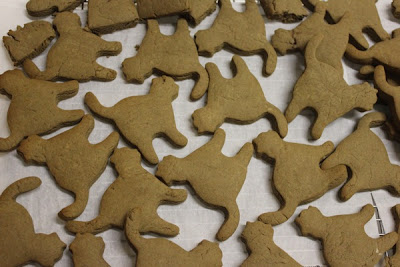 I was very pleased with the new cookie cutter.  Though the tail looks great but falls off easily and is crisper than the body.  Sylvia loved the cats when she got up the next morning.  She would have had them for breakfast if I had let her.  She will do anything to avoid eating her breakfast.  There is the usual refusal, hide under the table, tip it out on the table.  Then there is more creative ways like pleading to dip seaweed crackers into porridge or attempting to glue an oat to her eyebrow with vegemite.  Well what would you expect from a little girl who alternately wants to be an idiot or a library (not a librarian) when she grows up. 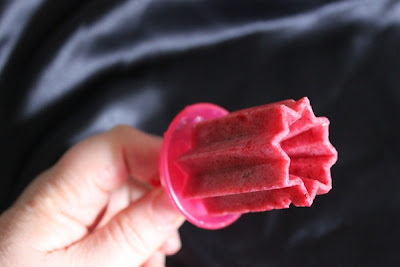 The other experiment that day was to use up a manky old banana in some icy poles.  Inspired by Kari's banana and raspberry ice cream, we blended a banana, about 1/2 cup of frozen raspberries and 1 to 2 tablespoons of dessicated coconut.  Then we froze them in icy pole moulds.  They were very yummy but too soft to hold onto the icy pole stick well.  Perhaps better as a bowl of ice cream. 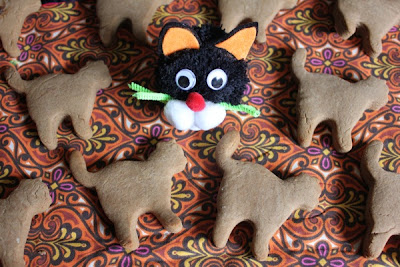 Lastly I thought I would share a few choice bits and reflections from of the interesting things I have heard on radio lately:
I am sending these biscuits to the Halloween Fiesta event that is being held by Cook's Joy.

Previously on Green Gourmet Giraffe:
One year ago: Easy caramel fudge
Two years ago: Afghans – childhood comfort food
Three years ago: The Cornbread that Stops a Nation
Four years ago: Asparagus Adulation and two recipe
Five years ago: A Break in Beechworth

Melt butter, sugar and golden syrup - I did this in the microwave but you could do it on the stovetop too.  Let cool a little.  Stir in cocoa, ginger and egg.  Then stir in the flour and bicarb to make a soft dough.  Briefly knead on a lightly floured board until smooth.  Roll out to 5mm thickness.  I did this on baking paper so I could do it with very little flour - just a little flour on the rolling pin.  I also only rolled out half the dough at a time.  Place biscuits on lined baking trays and bake for 10 minutes at 180 C.

On the stereo:
Portishead - Portishead
Posted by Johanna GGG at 11:03