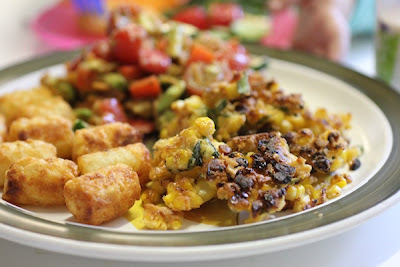 The corn fritters that I had in mind were those served by a Thai restaurant called Lemongrass in Carlton.  After a bit of searching I found a recipe for Thai Corn Fritters (Tod Man Khao Pod) on Serious Eats. I didn't have any Thai curry paste so I improvised with the flavours.   I am not sure I got them right.  The fritters were definitely not authentic.  They were certainly tasty.  Fresh corn with a bit of rice flour and egg for crispiness is a guaranteed winning combination.  In returning to the recipe afterwards I noted that I hadn't used the baking powder at all and nothing close to the amount of salt in the recipe. 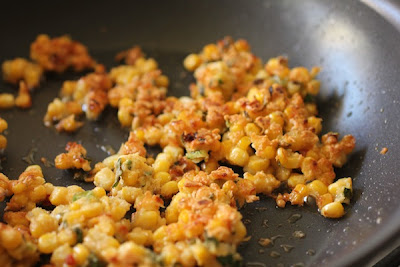 The recipe called for deep frying but that is too much of a challenge for me.  Instead I tipped far more oil that I usually do to fry them.  It worked quite well.  My main quibble is that the mixture didn't hold together brilliantly.  The result was actually a handful of fritters in a scattering of fried corn kernels.  This did not make for brilliant photos.

No matter.  I hope you can see past the unsatisfactory photos.  They tasted delicious and crispy.  I loved how they were light because, despite more oil than I usually use, they were mostly vegetable.  Served with potato gems and salad, they made a lovely easy meal.

Previously on Green Gourmet Giraffe:
One year ago: MLLA Avocado soy rotis
Two years ago: Apple and Cranberry Chutney
Three years ago: Mexican Lasagne and our Jetset Baby
Four years ago: Accolades and some random facts

Mix all ingredients except oil.  Check and adjust seasoning.  Heat 1-2 tbsp oil in a large frying pan and drop spoonfuls of the batter in the oil.  Fry over high heat until golden brown underneath.  It took me about 7 minutes but I could tell they were ready when they smelled cooked and some brown specks appeared in the batter.  Flip over and cook for about 4-5 minutes until golden brown on the other side.  Drain on kitchen towel and serve hot.  We served ours with chutney.

On the stereo:
Music from "The House of Dr Faustus": Ergo Phizmiz
Posted by Johanna GGG at 23:10