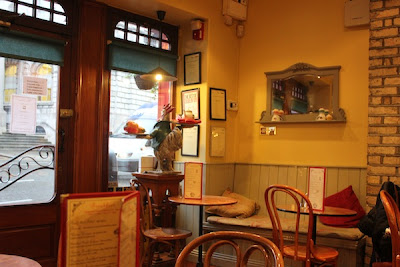 The Queen of Tarts she stole some hearts...  Many year ago in fact.  E and I were taken to this place by my sister on a previous visit and never forgot how much we enjoyed it.  So on a grey and misty Dublin morning last weekend we returned.  The cafe was as pretty and quirky as we remembered but the food was a bit hit and miss. 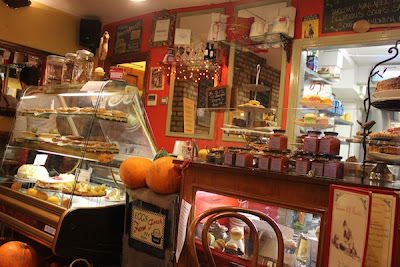 Thanks to jetlag, we arrived so early that the shop wasn't open yet (just before 8am).  We walked around the block, admired the Liffey and returned to find the lights were on.  It is such a warm and welcoming space, full of retro chic details.  The crockery has an elegant floral design reminiscent of afternoon tea with your great aunt. 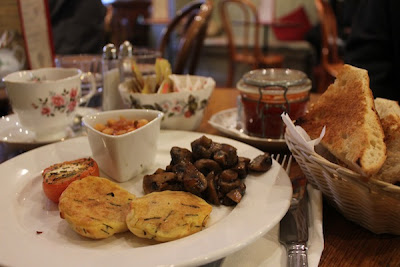 E and I both ordered the big breakfasts.  His was meat and mine was vegetarian.  He really liked his coffee and I enjoyed my blackberry and nettle tea.  However E was most dissatisfied with his breakfast not being warm enough.  I wasn't that impressed with my breakfast at first sight.  It seemed much smaller than it looks in the above photo.

Once I began to eat I found it was quite nice.  Could have been hotter.  But the home made baked beans were lovely with a subtle spicy kick, the mushrooms were juicy and plentiful and the fried tomato was soft and yielding.  The fry up was let down by the potato scones that were too much mashed potato (not enough flour) and too cold.  Worst of all was the cold hard toast, that is disappointing from a bakery cafe. 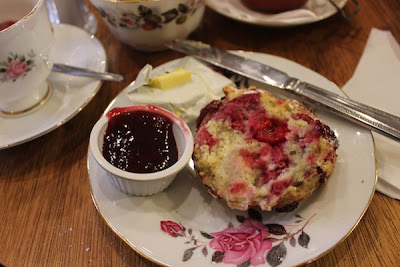 Having had better food there before and sitting in view of the tiers of plump scones was too tempting.  I decided my breakfast was not that huge and I needed a raspberry scone.  An excellent decision.  It was one of the nicest scones ever.  So soft and full of flavoursome berries that I didn't mind it being so huge.  I did wonder why it needed to be served with jam. 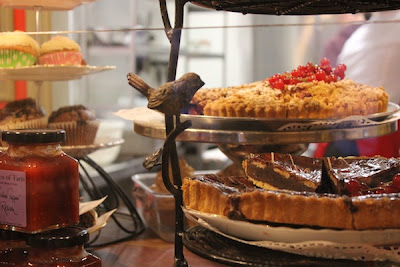 One good decision leads to another.   I loved the scone so much that I bought another one to take to the airport where we were flying out around lunchtime.   A big breakfast and a couple of scones in paper bags prepared me well for a hectic time in the airport that found us with little to eat for lunch but vending machine style food.  From the sublime to the ridiculous.  E was most displeased with Queen of Tarts.  Whereas I was more forgiving.  I wouldn't go back for a cooked breakfast but I would most definitely return for their cakes, tarts and scones.