Some days dinner seems such a challenge.  I was rushing to get enchiladas ready for dinner and chucked all the kale into the filling mixture.  The tomato sauce had too much balsamic vinegar.  Sylvia pilfered one of my wheat tortillas and spilled her cup of milk. Yet at the end there was a magical alchemy as it baked in the oven while we were out walking and we came home to a delicious dinner. 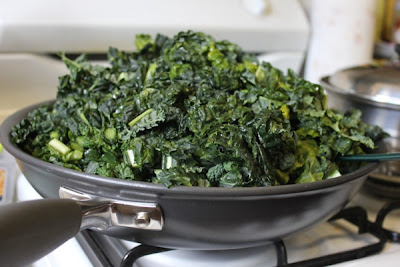 It truly was a dish where the sum of it was far superior to its parts.  I barely seasoned the kale mixture and the tomato sauce was too sweet and acidic with the balsamic vinegar.  Yet together the flavours meld marvellously.  It was rather spicy for me as I originally wanted to put in chipotle, forgot and added liquid smoke and chilli paste, then returned to the chipotle in an attempt to tame the sauce. 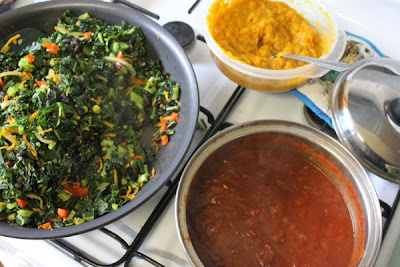 It is quite a light dish.  I added some cheese but as the original recipe says this is an easy recipe to veganise because it doesn't rely on the cheese very much (actually the recipe that inspired me was vegan).  I had heaps and heaps of filling leftover, no doubt as a result of my reckless decision to add the whole bunch of kale.  Incidentally I bought the kale at a trendy wee greengrocer where they kept calling it cabbage.  It is such a charming little shop that it is a shame the staff didn't know their goods. 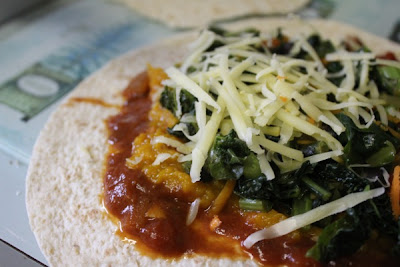 I was still hungry after my enchiladas and ate a bit of the filling mixed with sauce after dinner and it was quite nice.  I found it even more satisfying the next night when I had time to make some guacamole and corn with mint to serve alongside the enchiladas. 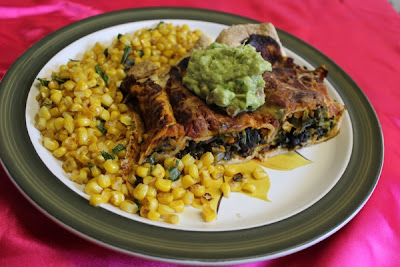 The tortillas didn't last the distance but the filling lasted us a few nights.  Once the enchiladas were finished, I was tired and just cooked up lots of pasta and stirred in the remaining kale mixture, pumpkin mixture and tomato mixture with a little grated cheese on top.  It was delicious.  I put a couple of serves in the freezer.  This week has been so busy that I was really glad of a ready made meal. 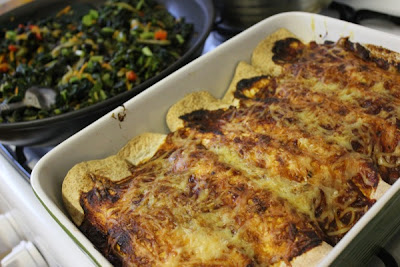 If I made this again, I would probably have less balsamic vinegar and less spice in the tomato sauce but I probably worried more about the sauce than I should as it mellowed out once mixed with the other fillings. Likewise the kale filling was a bit underseasoned but once mixed with the tomato sauce it is fine.  I also noticed that I needed a lot less liquid than the original recipe called for, possibly because I used home made mashed pumpkin which I think has more water than the tinned version.  The recipe below is a bit of work in progress, reflecting what I dd with some comments.

I am sending this to Joanne of Eats Well With Others and Heather of Girlichef for their 12 weeks of winter squash event, that celebrates pumpkin and other winter squash.

To make the tomato sauce, fry the onion in olive oil in a small saucepan for about 3-5 minutes until translucent.  Add garlic and stir for about a minute.  Add remaining ingredients and simmer for about 15-20 minutes.  (I think I simmered mine for 20 minutes to try and reduce it a bit but this may be because I added too much liquid.)

To make the pumpkin sauce, cook and mash the pumpkin.  (I cooked my pumpkin in the microwave until very soft with no water and I still drained a bit of liquid off my mashed pumpkin.)  Add remaining ingredients and stir well.

To make the filling, fry onion for 5 to 10 minutes until browned.  Add carrot and red capsicum towards the end of the onion cooking.  Add kale and cook until it has wilted.  Add black beans and cook briefly to warm through.  Stir through grated cheese.

To assemble enchiladas, first smear a spoonful or two of tomato sauce on the bottom of a large baking dish (about 9 x 13 inch).  Place a tortilla on a flat surface.  Layer 1 dessertspoonful of tomato sauce, 2 spoonfuls of pumpkin sauce, two to three spoonfuls of kale filling and a small handful of grated cheese.  Roll up and carefully transfer, seam side down, to the baking dish.  Once all enchiladas are in the baking dish, spoon tomato sauce over the tortillas (I leave the edges uncovered to get crispy) and sprinkle with cheese.  (As mentioned above, I had lots of filling leftover that I mixed with cooked pasta.)

On the Stereo:
Skull and Roses: The Grateful Dead
Posted by Johanna GGG at 23:01