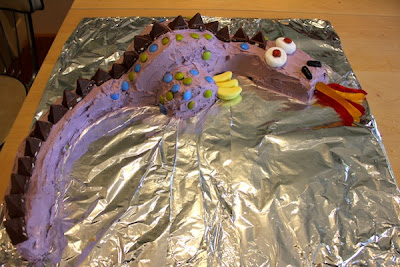 On the weekend Sylvia and I headed to my parents' house to make a dragon cake for my nieces' birthday cake.  Last year Grace chose a flower cake and this year Ella had her choice.  An excellent choice too.  The cake looked very impressive if I may say so.  In fact, having limited time this year meant that the cake was a true team effort.

My mum baked the cakes (using a gluten free cake mix) and cut them into pieces according to the instructions.  She also bought the lollies and made the buttercream icing.  The dragon required quite a large board.  Larger than anything my mum or I have.  Fortunately my dad is a whizz with his tools down in the shed and cut a piece of plywood to size, which was then covered with foil.  Their mum didn't join in but she had already made some cute barnyard cupcakes like these for their party with friends the previous day. 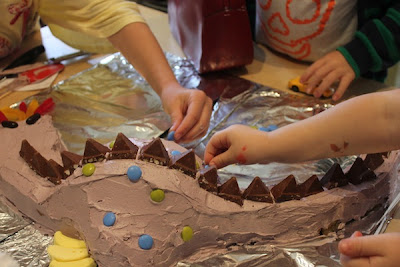 When I arrived at mum and dad's place, everything was waiting for me.  This made it very easy.  I then had help from Ella in spreading the icing over the cake.  Chris helped by taking Sylvia to the park at a critical moment.  The rest of the kids helped with organising the lollies and placing them on the cake.  I love the kids being able to help but it does require giving up some control.  At one point four of us were adding smarties and there were at least three styles being applied.

One of the trickiest parts of doing the cake was that I forgot to take my hardcopy recipe that I had found in Super Food Ideas magazine.  It had seemed like a good idea to rely on the online recipe.   Big mistake!  It was a really frustrating recipe.  The only visuals were on the video, which had no rewind or fast forward.  To find the bit where the cake pieces were assembled I had to watch some woman tell me how to bake a cake.  I was most displeased.

Which brings me to tonight's rant about technology.  I have finally signed up my applecare cover (warranty) and MS Office with much hurrumphing.  E said that I sounded like Victor Meldrew.  I encountered outrage after outrage.  Apple terms of service begin with claiming that they can change the terms of service at any time and I need to be responsible for regularly checking for updates and if I don't like that then I can just go and get a refund.  While I read these terms of service I was thrown out of the sign up page from where I was directed because I was taking too long.  Then there was all sorts of annoying moments of being asked for too much information.  I felt too cynical to read the rest of the terms of service so if you find that I have given my blog to Apple or Microsoft it is probably because it is in the terms of service! 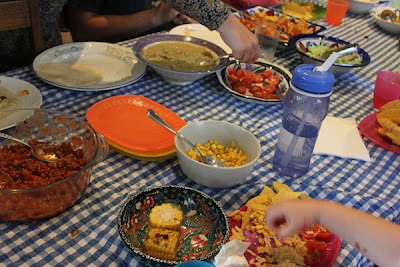 Onto the finer things in life - food!  We had an excellent tex-mex lunch.  Tacos, nachos, grilled corn, avocado, excellent chilli non carne etc etc.  There was something for everyone.  After we had our fill of Mexican food, we had a break for presents and photos.  Then onto dessert - I was amused to see Ella and Grace plunge a knife into the dragon and to be able to say I have eaten a dragon.  Alongside the birthday cake we had mum's caramel tart, Erica's chocolate cake, John's pavlova and Sylvia's chocolate coins. 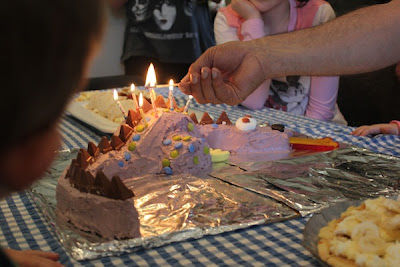 Sylvia had a lovely time playing with her visiting cousin.  When it was time to go they found all manner of hiding places.  Finally I picked her up to take her to the car and he clung to her foot.  A testament to a lovely friendship between the two!  As for Ella and Grace, I think it is safe to say that they had an aMAZEing birthday.

How to Make a Dragon Cake 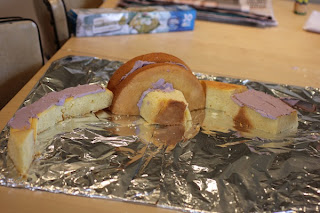 Cut 20cm round cake in half and arrange side by side with cut edge facing down.  Cut the loaf cake into two smaller circles to arrange either side of the larger semi-circles, plus the rectangular-ish shape for the head.  Take 4 mini cakes or cut 4 longs blocks - 1 for the neck and 3 for the tail.  Finally cut a triangular piece for the tail.  For more information on doing this, go to the Friendly Dragon Cake Recipe page and click on Notes to download a template to help cut out the pieces.

Cover cake board with foil (or use wrapping paper with clear cellophane over it or just coloured cellophane) and arrange cake pieces on the board.  (If your board is not quite big enough the tail could be either curled around more or just shorter.)  Now trim the pieces so they will join seamlessly and sit against each other nicely.

Spread buttercream icing one side of the 20cm round cake half and use it to sandwich together with the other half, as you can see in the large hump of the picture above.  Use buttercream icing to join other pieces of the dragon together. 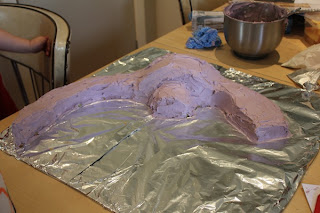 Cover the cake with buttercream, being careful where the cake is crumbly and using generous amounts of icing to join all the parts together.  Smooth the icing with a hot knife and use a cloth to wipe down the foil to remove any messy icing along the edges.

Place the toblerone triangles along the neck, back and tail of the dragon.  The snakes are the fire that the dragon is breathing.  The bullets become the nostrils and the marshmallows and 2 matching coloured smarties or m&ms (glue smarties/m&ms on with icing) become the eyes.  The banana lollies are the claws but I would look for an alternative as I didn't think these looked quite right.  The smarties or m&ms are used for spots on the dragon.  The recipe I followed just had them on the haunches but I would have preferred them all over.

On the Stereo:
There is death in the pot: various artists
Posted by Johanna GGG at 23:39