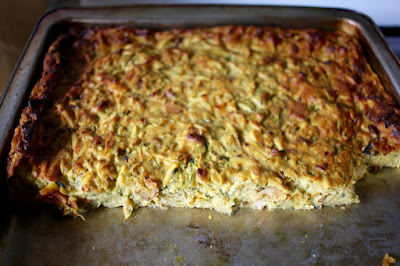 Being vegetarian does not mean that I don't still want to eat some favourite childhood dishes.  In Australia, everyone seems to know the zucchini slice recipe made with lots of zucchinis, eggs and cheese.  It is like a big fritatta.  It makes sense that it would have been popular back in the days when people had vegetable gardens and chooks in the backyard.  As we did as kids.  It wasn't too hard to make zucchini slice vegetarian once I discovered a good tofu bacon recipe.  Lately I have been eating less eggs so I decided to make it vegan.  That was more of a challenge. 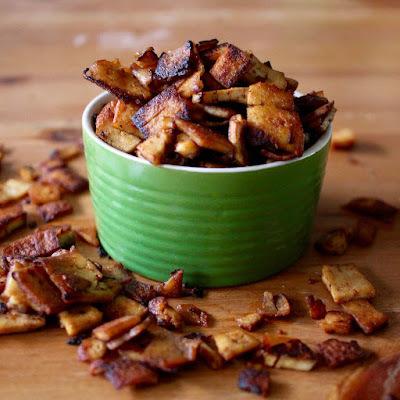 More recently I have become enamoured of a tofu besan omelette.  I make it often to serve with vegies for an easy dinner.  I decided to make a batch of this to add to the slice instead of eggs.  However I don't have this omelette noted as replacing a certain amount of eggs.  So I don't know how its volume compared to the 5 eggs in the traditional recipe. 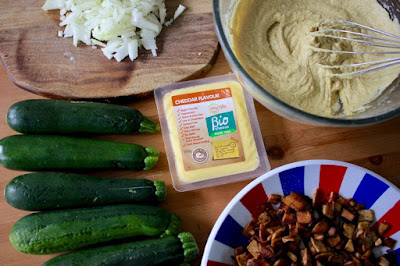 Now while I ate quite a bit of bacon before going vegetarian, I never liked eggs.  Discovering vegan alternatives to egg dishes has been really liberating.  Yet I have a problem in understanding how egg dishes should taste.  Which usually doesn't matter.  There would be nothing worse for me than having it taste exactly like eggs.  But figuring out the right texture for the zucchini slice was challenging. 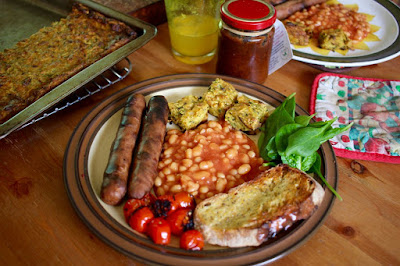 When the slice came out of the oven, it was really oozy to cut.  I could have eaten it with a spoon.  Which seems all wrong.  Yet I think this is the case with an egg version too.  The next day it could be easily sliced and was delicious.  It was like my favourite omelette with lots of vegies and tofu bacon.  We fried a few pieces for a superb weekend brunch.  The zucchini slice was a great alternative to an egg dish.

Mix all the omelette ingredients together.  I usually do this with the hand held blender but just used a whisk which make it smooth enough.

Grate zucchinis.  Squeeze some of the liquid out of the grated zucchini.  This can be done in the food processor or by hand. Tip into a large mixing bowl.

Tip into prepared tin and spread evenly. Bake for about 35-40 minutes (I did 50 minutes) until golden brown and crispy on top. It is quite soft when cooked but best kept overnight (I kept mine in the tin) and reheated the next day (at 180 C for 15 minutes.)

NOTES: I used about 6 zucchinis this time but it was about 4 last time I made it so I have just put the weight in the recipe.  Other vegan cheeses could be used, such as Daiya.  As it was very soft and oozy when cooked so I wonder if adding a bit more besan to the omelette mixture might help.

Week 4's theme is Memories and Traditions
Posted by Johanna GGG at 21:54