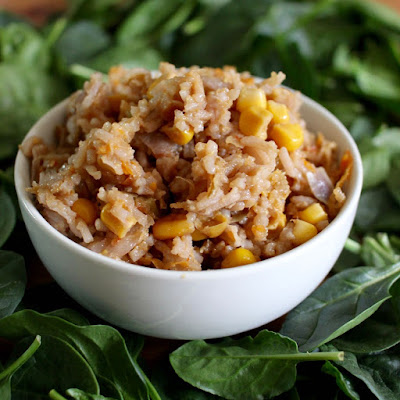 This rice started as a mistake.  I was browsing a Donna Hay magazine in the supermarket and was inspired by an Asian coleslaw.  It was time to try out a new blade in my recently purchased food processor.  The vegies turned to mush and I was relucant to throw out the slaw.   I added some more vegies and this rice dish was born. 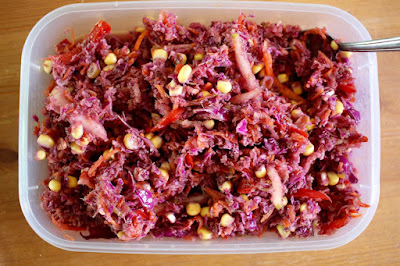 I had initially thought of making a miso soup.  E didn't want a thin broth.  So I found this sweetcorn soup for inspiration.  Which reminded me of my favourite corn and tempeh soup.  Then I looked in my fridge to see what needed using.  There was that forgotten bunch of celery at the bottom of the fridge.  I was still keen on the idea of a soup.  When I decided to add rice the liquid was absorbed and it was no longer soup.  It was rather tasty.  Which is the most important thing! 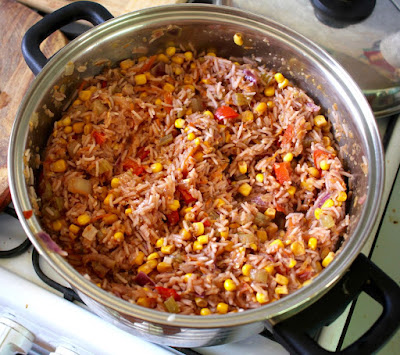 It has been one of those weeks where life has been a bit unexpected.  I was in bed with a terrible headache for a lot of the day on Wednesday and woke to the shock of Trump far ahead in the USA election.  I sang with my singing group at a small event today and got home to find my top was on back to front.  And my trackpad on my laptop is not as responsive ever since a wee imp recently put watermelon juice on it.  More pleasant surprises have been Sylvia eating some nutritional yeast flakes for a snack, the discovery of garlic scapes at the farmers market today, the first ripe strawberry in our backyard, and a friend thinking to send me photos of the colour fun run at school because I could not be there. 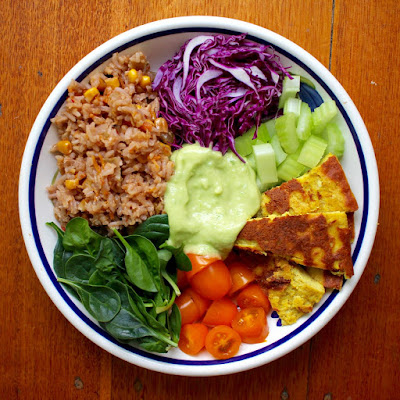 I am always cheered up if I can reduce my waste of food as much as possible.  And leftovers to make life easier.  I am trying to serve dinner as a nourish bowl more often to get more vegies into my diet.  Tonight's dinner was the Asian rice, purple cabbage, celery, tofu besan omelette, cherry tomatoes, spinach and an avocado dressing made with a finely sliced garlic scape.  I fancy serving the rice another night with vegie sausages and a kale salad.  Another few tubs of the rice are in the freezer for those nights when I could just toast some cashews and make a meal of it.

I am sending this rice dish to Cook Once Eat Twice and No Waste Food Challenge.

Fry onion, celery and capsicums in oils over medium heat for about 15 minutes, stirring frequently, until celery is soft.  Stir in garlic.  Add remaining ingredients.  Bring to the boil.  Simmer, covered, for 10 minutes.  Let stand at least 10 minutes.

NOTES: I measured the water using the tin that the creamed corn came in.  The rice was quite moist so next time I would probably use a wee bit less.  I only used dried ginger as I haven't been keeping fresh ginger in the house but fresh would be very nice.
On the Stereo:
Sergeant Pepper's Lonely Hearts Club Band: The Beatles

Week 2's theme is International.
Posted by Johanna GGG at 23:46