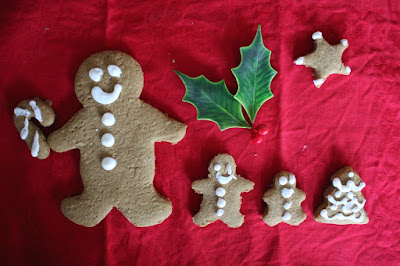 So that's it!  Vegan MoFo is over for another year.  I have enjoyed cooking and sharing lots of good vegan food.  Having said that, my life doesn't make this pace of blogging easy.  This is my 27th Vegan MoFo post and I am glad to slowing down to my usual pace.  As in past Vegan Mofos, I am finishing with a reflection on Vegan MoFo and a few random photos.

Firstly I didn't like the idea of daily prompts last year but I really liked the weekly themes this year.  They gave me plenty of space for ideas and lots of inspiration.  I had many more ideas than I could blog but I did keep up with frequent posting by preparing ahead of Vegan MoFo.  Sadly this did not help me catch up with reading other blogs and I found myself feeling rushed by the almost daily posting,  Life is just too busy.  Especially when I managed to delete three posts and have to rewrite them.

I did not manage one post on eating out during Vegan MoFo.  Even though I did have some excellent meals out.  We went to the Melbourne Vegan Eats Brew and Food Fest.  It was small but still overwhelming with too much choice.  E got the mac and cheese which was really good.  I had a lovely smoked tempeh burger but wished I had chicken salad in a cone from Rays or the carrot hotdog in the charcoal black bun.  And we loved the Half Pint sausage rolls.  I also enjoyed meals at Juanitas, True North and Smith and Deli, all of which have some great vegan food.

Actually the Ultimate Bean Stack that I had at Juanita's had dairy cheese in it.  I would have loved to have eat it with the vegan cheese but it was not available when I ordered.  Which brings me back to life as a vegetarian.  November marks 25 years living as a vegetarian.  Over that time vegetarians have become far more accepted and vegans seem to now be the odd ones out.

While I do not plan to become vegan any time soon, I am happy to incorporate more and more vegan food into my diet.  Aquafaba has made this even easier and is no doubt one of the reasons I haven't had eggs in the house for months.  We only have soy milk in the house but still have dairy cheese and yoghurt.  I have found lots of vegan cheese I love but am yet to find a vegan yoghurt to embrace.  Caeli has suggested Miyoko's yoghurt and I plan to try it. 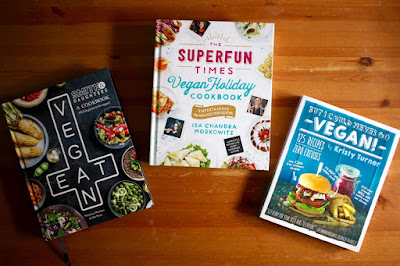 I have been fortunate to be loaned a few vegan cookbooks by Faye.  Sadly I have been too busy with Vegan MoFo to spend much time reading them.  And Vegan MoFo always leaves me with lots of recipes to inspire me.   Here are a few quicklinks: 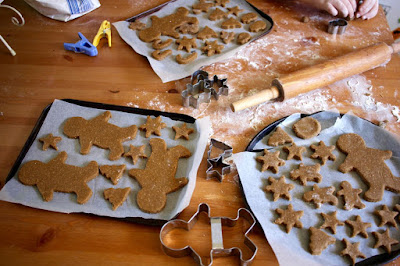 The one recipe I have made from Faye's cookbooks are the Gingerbread People from Isa's Vegan Holidays Cookbook.  They were nice but not as nice as my favourite gingerbread recipe.  Now that Christmas is near, Sylvia wants to make gingerbread for presents so I might have opportunities to try more vegan gingerbread.  Meanwhile I am embarked on making gingerbread houses for a raffle.  So, as always in my blog, I have much more to say than I have time for.  And you have probably read enough.  So I will now save my energies for some decorating tomorrow.