Recently I linked to some gow gee cups that I had made when Sylvia was little.  We started to talk about doing them again with hummus and vegies.  We had them for dinner but it would be a fun and easy finger food for entertaining.  We ate the gow gee cups with a simple but satisfying lentil celery salad.  It was a good easy meal after a busy day of work, the dentist and Christmas shopping. 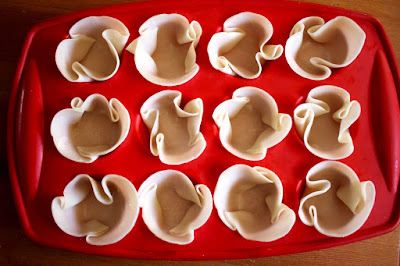 I really like the gow gee cups because they are just a matter of spraying round gow gee wrappers and putting them into a mini muffin dish.  They are then baked until browned around the edges.  This makes them crisp enough to put in whatever you like.  And they look like little flowers. 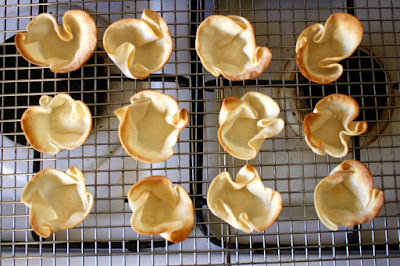 We put in some hummus and vegies,  I thought that the cherry tomatoes reminded me of Rudoph the Red Nose Reindeer.  Perhaps a couple of olive eyes and some pretzel antlers would make them really Christmassy.  Or you could add some holly leaves to the tomato by cutting them out of cucumber or green capsicum.  (Not that this would be practical if you were making a lot.)  The cucumber and carrot sticks were what we had.  Again, if you want a festive look you could do green and red capsicum.

The hummus didn't make the cups soggy immediately so I think they could be made perhaps an hour or so ahead of time but I don't know how much longer.  It is something I might experiment with when I have time.

I had hoped that Sylvia might like these but she preferred the cups separate from the vegies and hummus.  At least she ate more than she did of the salad.  Even though she was the one who inspired it. 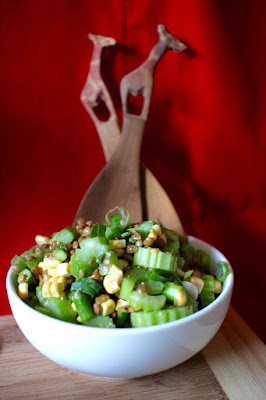 Sylvia loves to tidy her corner of the loungeroom.  She has seconded a coffee table and recently made it look really neat.  Unfortunately around the edges was the mess of everything that she had thrown off it.  Among the papers I found an old Vegetarian Times magazine with this recipe.  I changed the vegies a bit and am sure other vegies such as tomato or other beans would work well too.  It was quite sharply flavoured the first night but less so the next.

Place all salad ingredients into a medium bowl.  Either whisk the marinade ingredients or shake together in a jar (with the lid on).  Mix into salad and serve.  Can be kept overnight but the flavours mellow.

Lightly spray each gow gee wrapper with oil.  Place oil side up over a hole in a mini muffin tin and push in, making a few folds so it neatly sits in the hole and the folds make it look a little like a flower.  Repeat with remaining wrappers.  Bake for 10-15 minutes at 200 C.  Cool.  Put a heaped teaspoon of hummus in each cup.  Cut cherry tomatoes in half and press into some of the cups.  Cut the carrot and cucumber into matchsticks and plant in the remaining gow gee cups.

NOTES: I bought my gee gaw wrappers from the supermarket and they were vegan.  If you want them vegan and gluten free you could try this recipe. A couple of people have commented on never having heard of "gee gaw" wrappers - I checked again online and on the packet and it seems it is "gow gee" wrappers.  Oops!  Have edited the post.  But I sort of like the word gee gaw (which actually means trinket or bauble).

On the Stereo:
The Best Aussie Christmas

Week 5's theme is Holidays.  Today the prompt is Holiday Bake Day.  Nut roast has to be one of my favourite holiday bakes.
Posted by Johanna GGG at 21:16