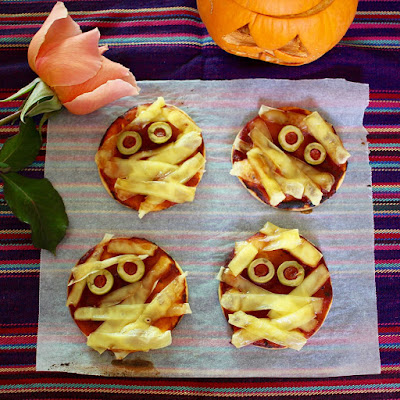 On Tuesday we had a small gathering of family and friends to remember the birthday of my stillborn twins Alex and Ian.  As their birthday is so close to Halloween, we had some themed food, including mummy pizza tarts.  It delights their sister Sylvia who seems to think it is her party!

I will stop here to reply to a few people who have commented on my conflicted attitude to Halloween.  Halloween is not my tradition.  When I was a young Catholic girl, I celebrated All Saints Day on 1 November.  It was a Holy Day of Obligation.  We prayed for all the saints.  It was followed by All Souls Day when we prayed for the souls of those who had died.

Now the shops push Halloween on us so they can sell lots of lollies.  There is something wrong with that.  And some aspects of Halloween make fun of death in a way that makes me feel uncomfortable.  Fortunately there are other ways to enjoy Halloween with my excited seven year old daughter. 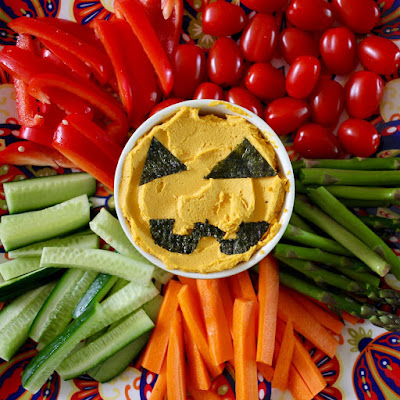 I think that as well as my uneasy relationship with Halloween, I am quite tired this year and felt quite unprepared for a birthday lunch. We kept the food simple.  Sylvia really liked the jack o'lantern face on the pumpkin hummus last year and this year she cut the face out of nori. 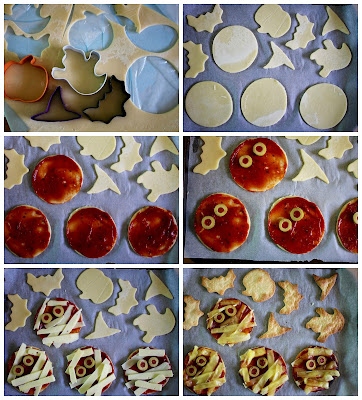 I had decided to make mummy pizzas because they seemed easy.  Initially I intended to make mini pizzas but then it was too much work to make the dough so I used some puff pastry that I had in the freezer.  Which was just as well.  The cake (which I will write about soon) took much longer to decorate than I expected.  By the time my parents and then friends arrived, the house was tidy and everything was ready except the mummy tarts. 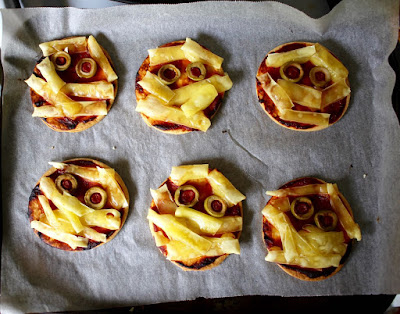 I spent some time putting the olives and cheese on the tarts while everyone helped themselves to pumpkin dip with vegies and blue corn chips.  At least it was the sort of activity I could do without having to concentrate very hard.  However I would have preferred it all laid out nicely when everyone arrived. 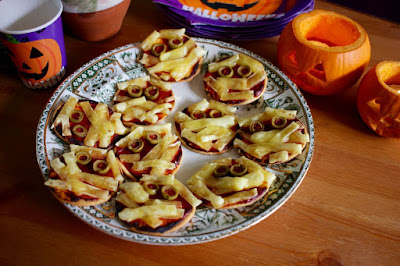 I did love these mummy tarts.  The vegan cheese worked well on them because it keeps its shape when it melts.  No one mentioned the cheese and I never asked if anyone was aware it was vegan cheese.  Sylvia did tell me that she loved the tarts once she picked off the cheese and olives!

As I didn't have a chance to take many photos I made the tarts again yesterday with some of the leftovers ingredients.  They really are quite easy and wonderful finger food.  I also baked the leftover scraps of puff pastry to have as little snacks.  Sylvia gobbled these up.  Sylvia also liked cutting out plain shapes with her Halloween cookie cutters from the puff pastry and baking these. 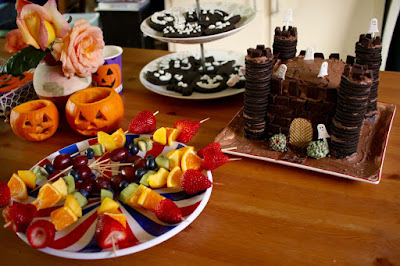 Dessert was far more organised than the savoury food and by then I was able to relax and indulge.  Here is a sneak peek photo.  I will be back with more on these treats soon.  We had a very pleasant afternoon chatting, listening to E with his ukulele and Sylvia disappearing into the garden with a friend and some umbrellas.

I am sending these to Healthy Vegan Fridays and Meat Free Mondays.

Lay out the sheets of puff pastry.  Cut out circles with a large scone cutter (about 15cm diameter).  Slice the biocheese into long thin slices and slice the olives to make eyes.  Spread each circle with about a teaspoon of pizza sauce to cover it.  Place olive 'eyes' on the circle and arrange the cheese strips about to represent bandages.  Make sure there are some spaces between 'bandages', but not too much.  Bake until cheese has melted and edge are slightly charred.  I have done this at 20 minutes at 180 C and 10 minutes at 220 C.  Best eaten on day of baking.

On the Stereo:
Doubt: Jesus Jones

Week 1 is Treat Yourself.