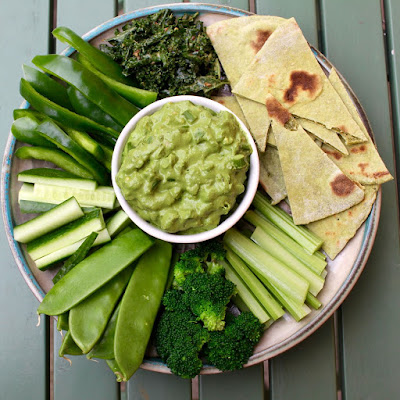 Green, green glorious green!  Yes.  You might have noticed I love green.  So while I have been having fun making rainbow recipes for Vegan Mofo, I was struck by the need to make a green dip platter.  Not only did I experiment with making a chunky dip but I also decided to try my hand at kale sourdough tortillas, 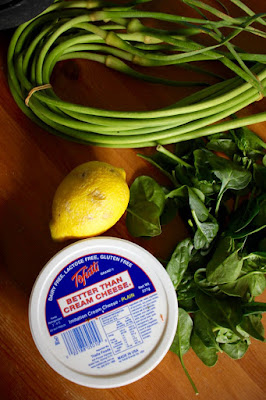 I wish I could tell you that it all went swimmingly.  The dip was not quite as I had intended.  I blame my inexperience with garlic scapes.  I thought two scapes would be ok.  Online lots of people say that they are much milder than regular garlic bulbs.  I even read one recipe with 10 garlic scapes in a dip.  Two was far too many for me.  Perhaps my tolerance for raw garlic is low.  But it burned. 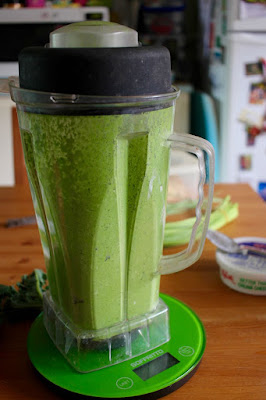 The creamy green base of cream cheese and spinach was otherwise excellent.  I was pleased at how well the vegan Tofutti worked but any cream cheese should work here.  However because the garlic scapes were so strong I then I added more flavour and added two tablespoons of white miso which was far too much.  One tablespoon would do.  (Amended in the recipe below.) 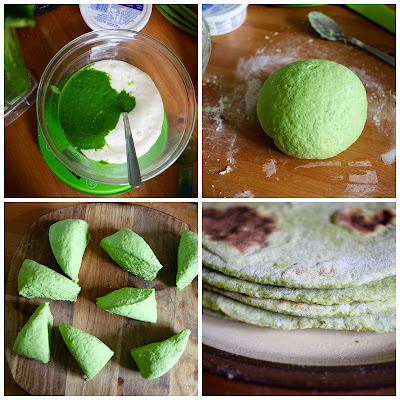 I wanted to make a completely green platter.  I wanted a green carb and was tossing up between green crackers and green scones.  But then I was swayed by Mihl's gorgeous  Kale Tortillas.  However I have sourdough starter to be used so I adapted my recipes for sourdough flatbreads and tortillas. 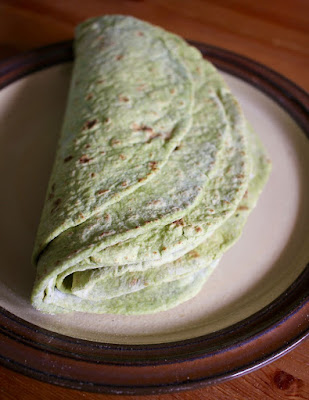 I really loved these tortillas.  They were green and soft.  I was just sad that the photos didn't do justice to their green colour.  But believe me that the colour was far better than my photography skills.  It was a really nice addition to my green platter.

I'd love to tell you that Sylvia enjoyed the kale sourdough tortillas.  I was home late for dinner and left a message for E that he and Sylvia should help themselves to the tortillas.  Which were on the kitchen table.  Instead they helped themselves to the tortilla chips in the pantry that I had asked him the previous day to keep for nachos!  I think it was a case of reading what he had hoped was there. 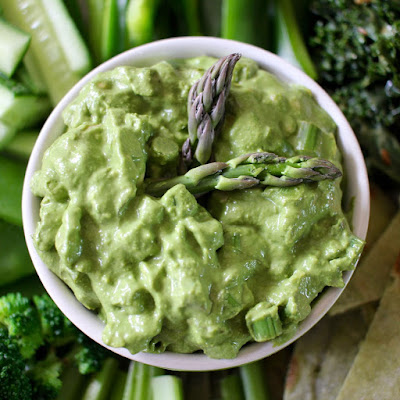 If only the dip hadn't been lopsided in flavour, I would have been really happy.  I think a bit of tweaking would fix this.  As it was, we valiantly ate it for dinner with vegies and tortillas.  But the garlic flavour was too much to want to have much more.  I rescued it by mixing it with some home made guacamole instead of garlic.  It added a perfect amount of flavour.  (I also considered adding it to soup, stew or tossing with some rice or pasta.)

Blend cream cheese, spinach, lemon juice, the garlic scape miso and salt until smooth and creamy.  Finely chop the asparagus and microwave or steam until cooked but still green.  Cool.  (I put mine in the freezer for about 5-10 minutes.)  Pulse cashews in with the cream cheese mixture and then add the asparagus.  I didn't pulse the asparagus but you might want to, depending on how chunky you want the dip.

Remove stems from kale and blend leaves with water to make a smooth green liquid.  Measure out 125g and pour into a medium mixing bowl.  Stir in remaining ingredients to make a shaggy dough.  Lightly knead on a floured surface to make a smooth but firm dough.  Divide into 8 pieces.

Roll each piece out thinly as possible and dry fry in a heavy based frypan for about a minute either side.  The tortilla will puff up in small humps when frying the first side - these can just be pushed back down before you flip over.

Best on day of eating but can be reheated the next day, preferably with a filling such as cheese or beans and rice.

Week 3's theme is Rainbow Food.  And today the daily prompt is to make something green.  How could I resist the call of green!
Posted by Johanna GGG at 11:38