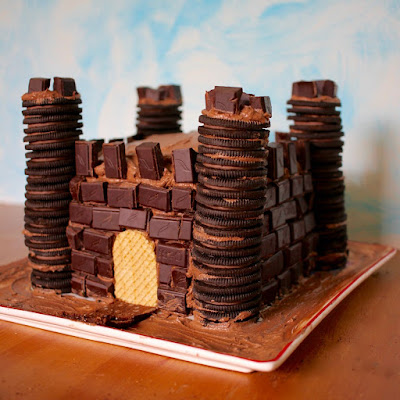 This vegan castle cake (for our recent lunch) was inspired by one on Pinterest.  I have wanted to make it forever.  My final cake was a bit wonky.  I like to think it is the romantic ruin of a medieval castle but who am I kidding!  Had I more time I would have tried to straighten it out.  However with the time available, it was a pretty huge achievement.  And Sylvia had a great time helping me. 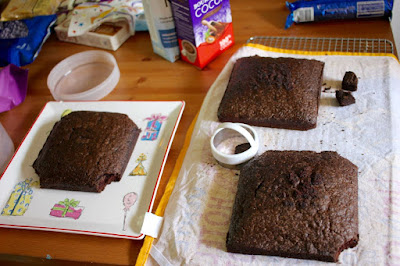 I couldn't find a step by step guide to this cake so I will share some of what I did and some of what I would do next time.  The only thing I really know was that the towers would be oreo stacks and that it would be totally vegan for Vegan MoFo.  The rest was trial and error.

Firstly I had to work out the cake size and height.  This involved putting a packet of oreos next to my cake tins and then reverting to a favourite vegan chocolate cake recipe.  The one that I have been making for about 20 years.  It is usually quite liquid but when I scaled it back the mixture seemed thicker.  It still make a lovely moist cake.  This recipe never lets me down.  I halved the recipe and made two cakes, then I made a third cake as I thought I needed more height.  Thank goodness I made these the day before I decorated the cake. 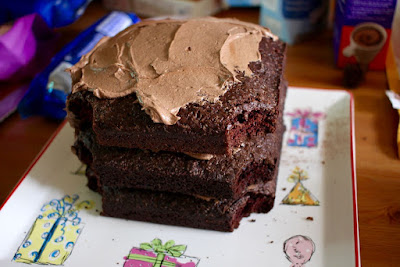 Before stacking the cakes I used a scone cutter to cut out the corners to create somewhere for the towers to snuggle in.  Unfortunately they weren't quite uniform which didn't help create uniform towers.  I also worried that the cakes were quite domed rather than flat.  But once I put a little frosting between each layer and frosted around the edges it seemed to work ok.

I used the frosting from the classic Australian Women's Weekly Children's Birthday Cake cookbook.  Then I decided it needed more cocoa.  It still wasn't that dark. 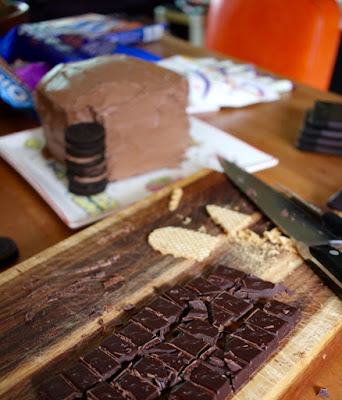 The next challenge was the chocolate.  I found that Sweet William makes individual wrapped bricks and bought a few bags of these.  It seemed much easier not to have cut up blocks of chocolate, despite all the packaging!  Yet once I tasted one, it was too sweet and I took the other packets back to exchange for some Green and Black chocolate.

As well as not enjoying the taste, I thought the smaller Green and Blacks were a better size.  Again I had a look at them against the cake tine to check.  However I had been right that chopping up chocolate was not ideal.  A lot shattered and others were just a bit uneven - not so much that the naked eye would notice but enough that they didn't sit neatly on the walls.  I had considered Lindt chocolate because it is so much thinner but as it comes in large squares I was worried about chopping it up.

I also had to search for a door.  At first I bought a packet of wafer cream biscuits but then after looking in a few shops I found flat ice cream wafers.  This was much easier to cut into a door.  However I might have made a square door because putting bricks around a rounded door was hard.  I bought Kez'a chocolate mud bars (like Nak'd or Emma and Tom's energy bars) to make the path to the door.  I had thought of putting windows made of wafer shutters but did not have time to do this. 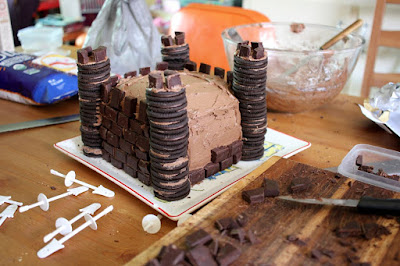 Sylvia was very excited about this cake and her contribution was to make the towers.  As it took me well over 2 hours to decorate the cake, I was glad of her help.  I don't think the towers were quite straight but they were close enough for jazz.  And I was not quiet sure they were all the same height.  Next time I would count how many biscuits for the first tower and then count out the right amount for each subsequent tower. 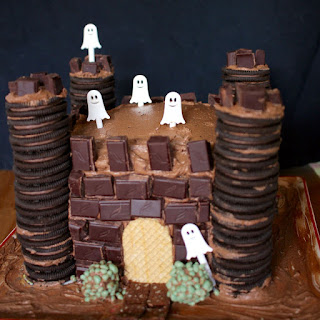 Once it was all done, Sylvia had great fun helping with the finishing touches.  We had decided it would be haunted.  We had bought some Lindt Halloween chocolates with plastic ghosts with sticks that had to be cut to size.  For the bushes either side of the door, Sylvia moulded some mud bars, dipped them in chocolate frosting and then roll in green chocolate covered popping candy leftover from Christmas.  Finally I rubbed chocolate frosting over the plate to cover up the pattern.

It was a rather impressive cake for our lunch.  I probably needed more than 2 hours to decorate but we were still very happy with our creation.  Cutting it was another matter.  It was a challenge.  Some pieces were covered with blocks of chocolate and, the cake having three layers, they were rather large slices.  We managed.  And I think our boys would have loved the cake as much as Sylvia did.

I am sending this cake to Choclette for We Should Cocoa.

Mix dry and wet ingredients in separate bowls and then mix.  Pour into a greased and lined 15cm square cake tin and use a spoon to make sure it is spread to the edges of the tin.  Bake for 20 - 30 minutes at 180 C.  (If your oven is on the warmer side I would recommend baking at 160 C as my oven is quite slow and the sides were almost charred.)  Cool on a wire rack.

Make three of these cakes for the castle cake.

Beat margarine until soft and creamy.  Gradually beat in icing sugar and cocoa.  Then beat in the milk as required to loosen up the frosting to make it creamy and easy to spread.

Bake the 3 cakes the night before you are ready to decorate.

On the day of decoration, use a scone cutter to cut wedge out of each corner for the tower.  Place one cake on a square cake plate.  Spread with buttercream and place another cake over it.  Repeat with buttercream and third cake.  Check that the cakes are stacked with sides aligned.

Spread buttercream over the whole cake.

Stack one tower of oreos to check the size and count them.  Then stack an even number of oreos on each corner, sandwiching them together with a little butter cream.

Cut a door out of an ice cream wafer and position on one wall.

Cut up chocolates into "bricks".  I found that sawing gently with a chef's knife was the best way to have as many as possible cut whole without cracking.  Cracked bricks could be cut for edges.  Arrange bricks along walls in rows.  Keep your hands clean so you don't smudge the bricks

The last row of each wall should be crenelations (ie the bricks are arranged lengthways rather than widthways with brick sized intervals between them).

Spread buttercream over the top of each tower and arrange four half bricks standing up as crenelations.

Slice a mud bar to make paving for a path.

Half the second mud bar and mould into a bush.  Cover with buttercream and then sprinkle with green sprinkles.  Place outside door.

On the stereo:
Costello Music: The Fratellis

Week 1 is Treat Yourself (I am extending Week 1 slightly as I started it late!)
Posted by Johanna GGG at 23:00