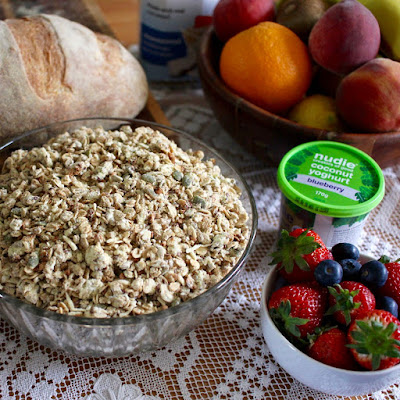 Muesli (or granola as it is called elsewhere) has been part of my life for a long time.  I didn't always make it.  When I was young we bought it in a packet.  I ate it with milk.  Ever since I have gone through phases of eating it.  Sometimes with juice.  Sometimes with yoghurt.  Occasionally at a breakfast spread at a hotel.  The above photos was inspired by a second hand glass bowl from an op shop that reminded me of a hotel breakfast buffet.

Recently I have enjoyed making my own museli.  While my favourite is my chocolate muesli, every now and again I fancy a change.  With manky bananas in the fruit bowl and a curiosity to try maca powder, I embarked on a new flavour.  It has pleased me very much over a month of breakfasts and I would highly recommend it. 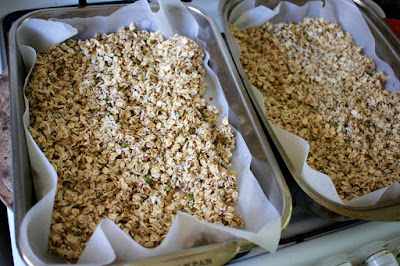 My main uncertainty about the muesli was how to use the maca.  I had a feeling that it would marry nicely with banana and I liked the idea that it gave energy for the day.  Then I read I should not cook it.  So I toasted the muesli and added a cup of maca.  My lovely toasted muesli went all powdery.  But I ate it anyway.

(And did it give me energy.  I only noticed at one point I did not eat muesli for breakfast and was decidedly lacking in energy for a couple of days but I think that was more due to Trump being elected and me being laid low with a headache!) 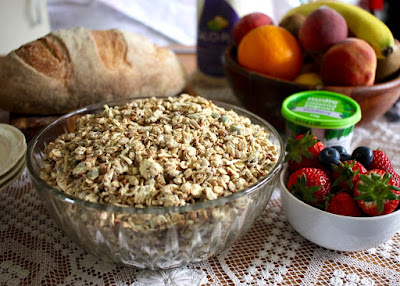 I liked how it smelled like banana cake when I opened the canister of muesli every morning.  Until I had been eating it almost 5 weeks and then it didn't smell quite so good and I lost confidence in the freshness.  I think the maca would have been better in the toasted muesli rather than added afterwards but am still not sure if this would affect the maca's potency or muesli's shelf life.  More experiments and yummy breakfasts to come.

Banana and maca muesli (granola)
Adapted from the KitchenMaid

Place everything in large bowl and mix.  Tip into two large lined roasting dishes and baked for 30 minutes at 180 C, stirring once or twice during the baking.  It should be golden brown.  Cool in the tin and then store in an airtight container for about a month.

NOTES: For the seeds I used a mixture of sesame, sunflower, pumpkin, linseed and chia.  For the oil I used rice bran.  I added my maca after I cooked everything else but I would try it in with everything next time, though it may need a bit more liquid.  For those who are confused by terminology, in Australia we have always called it "muesli" rather than "granola" which is used elsewhere!

On the Stereo:
The Gorey End: Tiger Lilies with the Kronos Quartet

Week 4's theme is Memories and Traditions
Posted by Johanna GGG at 22:51