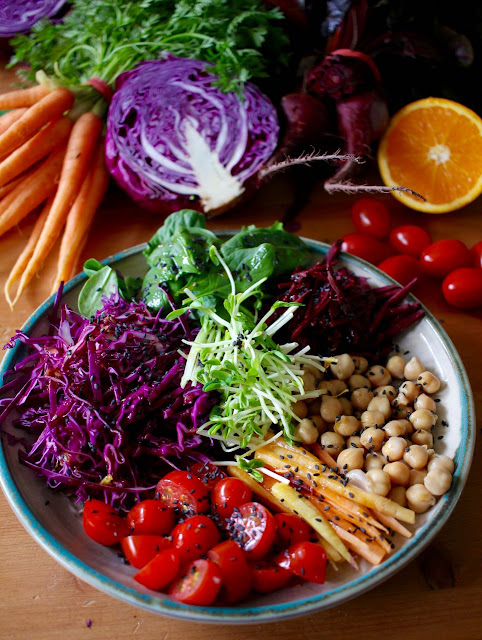 At the start of October the AFL Grand Final saw out the end of the School Holidays.  We went to the Coburg Farmers Market in the morning.  Fresh produce is great inspiration for vibrant health food.

My favourite part of the Grand Final is the pre-match entertainment with the singing, the balloons and running through the banner.  While watching this on the telly, I was trying to put together the salad.  It was slow going but satisfying. 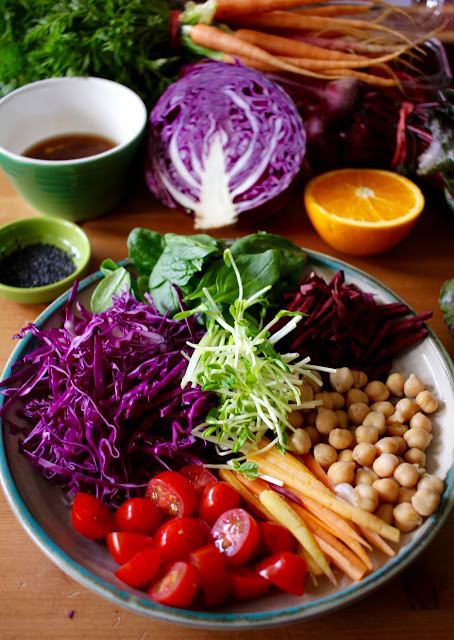 It took some time to chop vegies, keep an eye on the footy match preparations, whisk dressing, sit with Sylvia to watch Vance Joy sing Riptide and explain who Sting is.  Lunch wasn't ready until the match was well underway.

The salad was the very antithesis of the football world of greasy chips and cheap meat pies.  Which is perhaps fitting as I don't really follow the footy.  Every few weeks I remember to ask how my nominal team is doing.  At the end of the season I watch the Grand Final until it is clear who is winning and it gets boring. 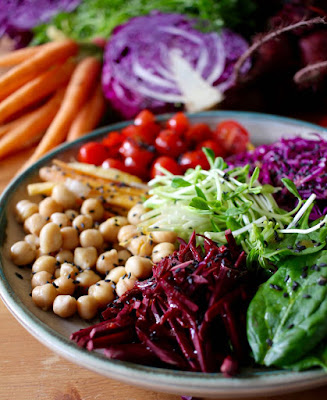 This year, it wasn't until two minutes before the final siren that the commentators dared to call it.  The match was so close.  As they like to say, footy was the winner.  But really the fairy tale of this Grand Final was that the Western Bulldogs were the winners, after 62 years without a premiership.  I watched til the end.  Though I did have my neighbour visit, make limeade and ring my mum for a chat.  Yet it was a memorable match just as this salad was memorable.

I took the salad dressing from a rainbow salad in a newspaper magazine but, if I do say so myself, my selection of vegetables was far more colourful than the original.  The dressing was pretty similar and made for a winning salad.  E ate his salad in a sandwich made with fresh bread I had baked that morning and loved it.  There was a little salad leftover that we picked at during the afternoon.  It was gone by dinner.  I know it is not the first time I've said this, but I wish more of my lunches were so colourful and healthy.

I am sending this to Healthy Vegan Fridays, Eat Your Greens, Meat Free Mondays and No Croutons Required.

Arrange vegies and chickpeas on shallow bowl.  Toast sesame seeds in frypan.  Iif using poppy seeds they do not need to be fried.)  Lightly whisk together dressing.  Drizzle over vegies.  Sprinkle with sesame seeds.

On the Stereo:
All of this and nothing: Psychedelic Furs