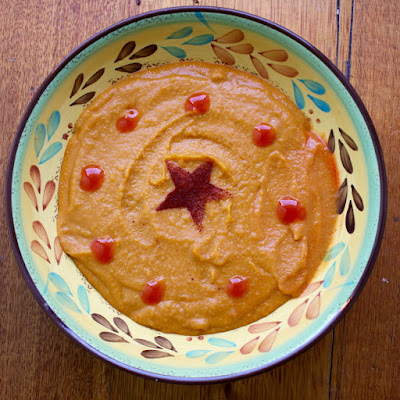 This Thai pumpkin and lentil soup is a variation on a soup I make quite often.  It is just the sort of soup that I needed the day after the school fete.  Sylvia had organised a playdate and was weeding the garden with her friend.  (I was suitably impressed by the garden!)  E was practicing uke for the forthcoming ukulele festival and I had been making aqua faba meringues for Sylvia's show and tell.  Simmering a fairly simple soup was a relaxing late afternoon addition. 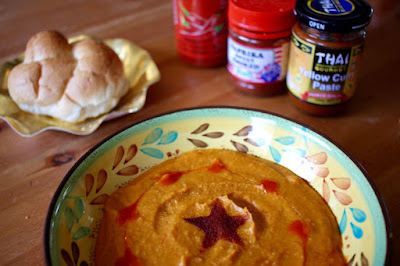 I played around with sifting smoked paprika shapes onto the soup.  I am not sure the circus look was the one I was aiming for!  We were quite tired after the previous big day.  Dinner was eating on the sofa in front of the telly.  I didn't have energy for anything else.  I was pleasantly surprised by the happy marriage of yellow curry paste and smoked paprika.

Having made a similar soup (thai curry split pea soup) a few months back, I had some confidence that Sylvia might try it.  The catch was that she professes to hate pumpkin.  I remember her eating it as a child and am a little less sure that she truly dislikes it.  So I asked her to eat a couple of spoonfuls of soup with a bread roll before she had her vegetarian schnitzel.  I focused on the lentils and tomatoes in the soup, which I know she likes.  The next night she was convinced to eat a small bowl of it with a bread roll.  I resisted doing a victory dance.  But I know this is one step closer to Sylvia realising that pumpkin is indeed manna from heaven. 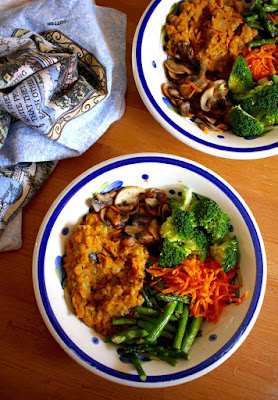 The soup lasted us for about 5 days.  I really enjoyed it.  (To be clear we did not eat it 5 nights in a row but this is how long we had it in the fridge.)  The above photo is of the last night we ate it.  I had some aged sushi rice with kale powder that I mixed into the soup to make it more like a stew.  We served it with steamed broccoli, fried mushrooms, asparagus and grated carrot.  It was really good.

Fry onion and carrot in an olive oil until soft - about 5-10 minutes.  Stir in the garlic.  Add pumpkin, tomato and stock.  Bring to the boil.  Add lentils and simmer for about 20 minutes or until pumpkin and lentils are soft.  Add coconut milk, curry paste and smoked paprika.  Blend.  Check and adjust seasoning.  Serve with sriracha if you want a bit more heat.

On the stereo:
Songs in the Attic: Billy Joel

Week 2's theme is International because I am a little behind on week 2.  And if you wish to believe it is a monochrome one-colour food for Rainbow Week or Day #14, then so it is!
Posted by Johanna GGG at 21:50