WSC Chocolates with a peppermint filling 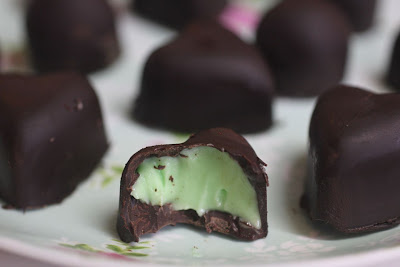 I don't bake with chocolate and mint.  Which is odd.  As a child, one of my favourite biscuits was a choc mint slice - a chocolate biscuit, covered by a layer of mint cream all covered in chocolate.  And my favourite ice cream was choc mint.  I was pleased when my mum put peppermint crisp on a pavolva.  And I loved Red Tulip after dinner mints (like these).  The thin chocolates in a dark paper sleeve were the height of elegance. 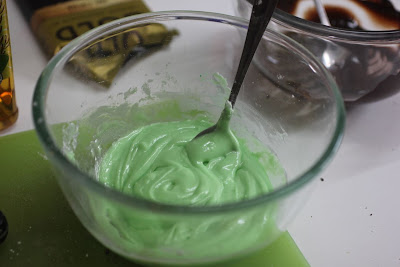 After dinner mints brings to mind memories of watching the World of Sport on Sundays with my dad and giggling at the silly in-show advertising of Ballyntine chocolate mints.  They never took themselves too seriously.  But I digress because I really wanted to tell you about making my own peppermint filled chocolates.  I think I used to call these peppermint creams. 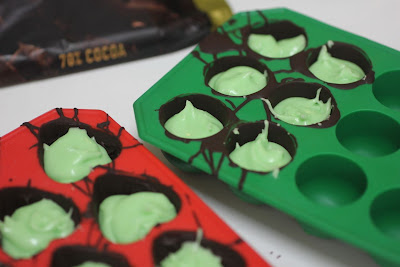 I don't know where or why my love of mint dwindled as I grew older.  I don't eat a lot of mint flavoured foods now.  But occasionally I have a nostalgic yearning for it.  This month Victoria of A Kick at the Pantry Door has chosen mint for We Should Cocoa (the event founded by Choclette and Chele).  It presented me with an ideal opportunity to try some peppermint filled chocolates. 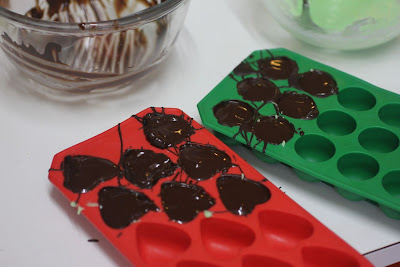 After making the lime cheesecake filled eggs at Easter I was interested to try other filled chocolates.  In fact there is a list of some of the ideas I found at the bottom of this post.  The recipe for peppermint filling was surprisingly easy.  It used pantry staples.  The only thing I had to buy was peppermint flavouring. 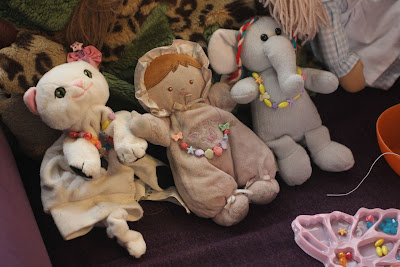 Then there was the matter of moulds.  I didn't want to use my Easter egg moulds out of season.  Sylvia and I went down the street in search of chocolate moulds.  There were none to be found.  Instead we ate lentil and silverbeet soup (me) and vegemite and cheese pasties (Sylvia) at Zaatar and returned home with milk, a bead making set (which were made up for her dollies) and a new green ice block mould.  (Katie Carrot suggests buying chocolate moulds at Cake Deco in the city so I must look there.) 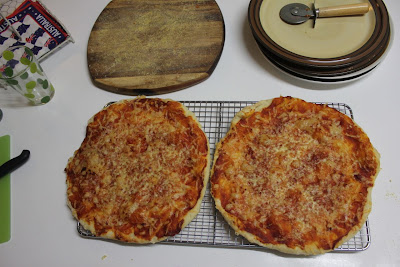 I wasn't sure how the ice block moulds would go.  I made a few chocolates in my old heart shaped mould and a few in the new green one.  They were good but I found the filling incredibly sweet.  Of course it tasted better for being dyed green.  Fortunately I was able to get some test tasting by my brother and his girlfriend who dropped in to say hello and stayed for pizza. 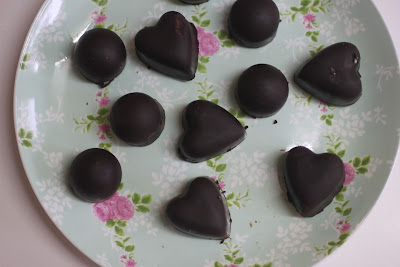 Paul and Sarah were impressed that I had made chocolates and thought they tasted lovely.  In fact this was far easier than baking.  And now that I have bought peppermint essence I might even find further uses for it in the kitchen!  Green mint scented playdough anyone?  After all, Sylvia was smitten with the chocolates - even if half of it melted in her hands!

I thought it was a good day to post these chocolates because it is Bloomsday today.  Though these chocolates have nothing to do with Ulysses, they can claim an Irish affiliation just by the wearing of the green.  And I suspect Leopold Bloom would not have said not to one of these wee chocolates.

Melt about half the chocolate and using a spoon (or a food paint brush if you have one) cover the inside of the mould with chocolate.  Set in the freezer.

Meanwhile make the filling by mixing icing sugar, oil, milk, peppermint essence and food dye to a mixture that is just soft enough to drop off the spoon in lumps.  It should be quite thick and hard to stir but will set to a smooth mixture when left for a few minutes.

Remove the chocolate coated mould from the freezer.  Fill most of each casing with filling, leaving a little space for the chocolate bottom.  Melt most of remaining chocolate and spoon chocolate over the bottom of each filled chocolate to seal the filling in.  Return to the freezer.

When set, push out of the mould gently.  The recipe said to keep in the fridge, though I think these are ok at room termperature for some time.  Best eaten at room temperature.

On the stereo:
Brick Walls and Barricades: Kasey Chambers
Posted by Johanna GGG at 20:22