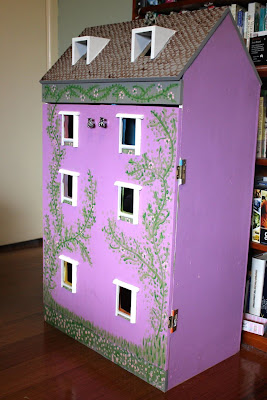 When Sylvia had her four year old health check she was asked to draw a face.  She drew a house instead.  According to her doctor, this is just as valid in demonstrating her development.  She draws houses all the time.  I think she might be an architect when she grows up.  I once decided I wanted to be an architect.  For a week.  Both of us have had lots of fun decorating houses lately.  Mostly the dolls house.  So this post is mostly a visual guide to our dolls house work in progress.  I have also included a few other cardboard houses we have created lately.  Just in case you like a smaller scale of development! 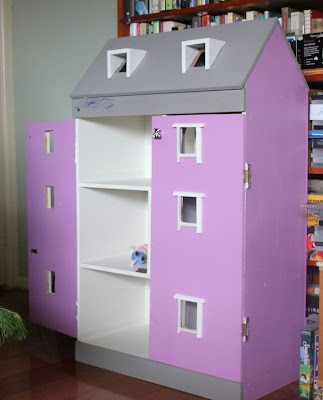 When my brother in law (thanks John) built Sylvia a dolls house for Christmas last year, it was an opportunity to decorate. Unfortunately I don't have woodwork or needlework skills.  Fortunately I can wield a paint brush and use scissors and blu tak.  We have been decorating whenever I get a burst of energy.  Slowly slowly the house is starting to feel like a home. 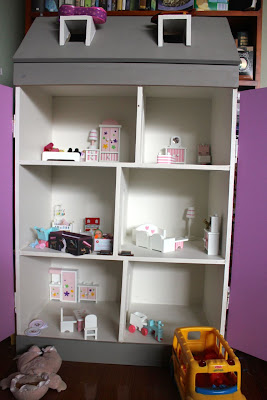 My first move was to buy some cheap dolls house furniture.  It is not my ideal furniture but at least the house is furnished.  I would like to gradually replace some of the furniture.  (She has been given a few nice pieces of furniture and kitchenware too.)  Below are close up photos of most of the rooms so you will see the furniture better.  In the above photo you can see how white everything is.  White is not my colour. 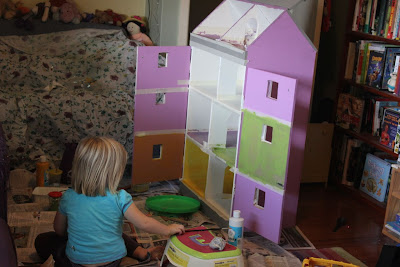 Oh that's right, it is Sylvia's dolls house, not mine.  But what kid would prefer white to a rainbow of colours!  Once we had furniture, our next job was to paint the rooms.  Sylvia helped to decide on colours and what room would be what.

We used some little rollers to paint large surfaces and went through a lot of masking tape for neat edges.  Sylvia was able to help doing the roller painting of floors and walls.  Mostly she has been excited but there have been frustrating times for both of us.  A lot of newspaper has been spread over the floors in these painting sessions too.  Even so, E found some paint on on of his shoes the other day 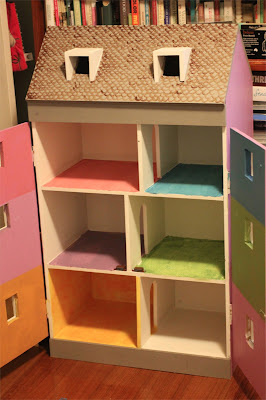 Here are the painted floors and interior doors.  I also painted the roof to give it more texture.  This was fiddly work that I painted while watching a documentary on The Rolling Stones.  (I think it was Crossfire Hurricane.  I know it was suitably absorbing to keep me entertained while I painted the small details.) 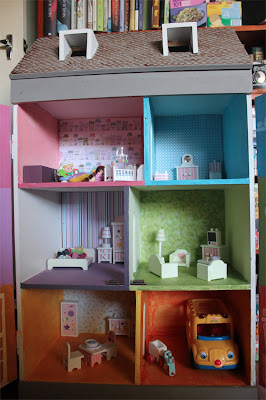 We painted the walls to match the floors.  At the back of each room is wallpaper made of scrapbooking paper.  (Note: the rooms are quite big and the scrapbooking paper is a bit small for the pink kids room at the top.)  We actually bought most of the wallpaper first and mixed the paint to match the patterns.  Some of the colours were still not quite what I had in mind but they were close enough for jazz.  At some stage there might be some re-painting.  The orange room at the bottom is the garage.  I managed to convince Sylvia that you don't wallpaper your garage. 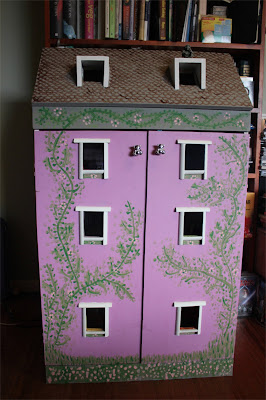 It took me a long time to paint the front of the dolls house.  I was worried I would mess it up.  Finally I started it with Sylvia.  She did the pink dots of flowers at very bottom.  I spent quite a while doing the details of the vines while Sylvia watched tv.  At the end I was very pleased with my handywork. 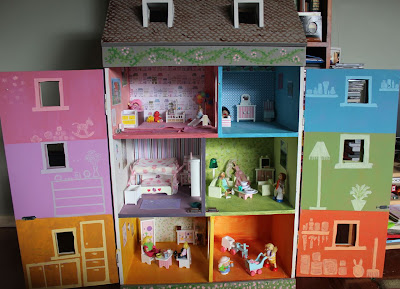 Here is the most recent view of the house.  I have painted some pictures on the interior doors to reflect the rooms.  (I jut couldn't get the purple colour right.)  While we have got this far in decorating the rooms, the attic rooms are sorely neglected with merely the floors painted.  Once we get some new furniture, some old furniture might go into the attic.

Another little project that we still haven't done is to cover some pictures in clear contact with wood grain contact as frames.  I cut some pictures and lost them.  So this week we just cut out pictures - mainly from the backs of old calendars with some artwork donated by Sylvia - and blu takked it to the walls.  I got a great idea to do some pictures of windows inside too but have yet to try this. 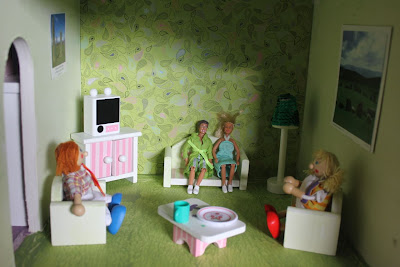 So lets take a stroll through some of the rooms.  The green loungeroom is my favourite.  I think I got the colours right and I love the pictures on the walls.  Maybe a fireplace would be good.  We covered the lamp with sequins but it is a bit dark in the corners and may change.  I have seen a few ideas for lighting dolls houses and would like to try some at some stage.  This house is quite big and gets dark corners. 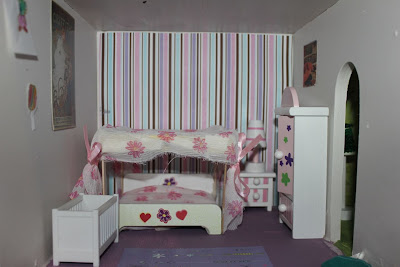 This is the master bedroom.  Sylvia and I made a clumsy attempt at a four poster bed.  We only used icy pole sticks and sticky tape.  I think we need wooden dowel and glue.  One day we will get back to it.  Sylvia insisted that the baby sleep in the room and needed some of her kiddy artwork above the cot. 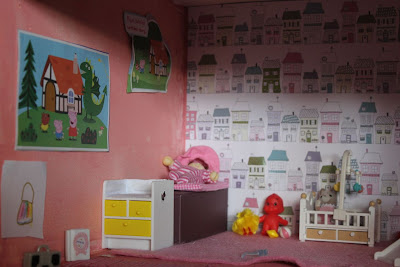 The nursery - or children's bedroom - had to be pink, according to sylvia.  We have a few toys here, some pictures from a Peppa Pig magazine.  I am not sure why the baby has gone to bed wearing her mum's pink sunhat but I am sure that makes sense to Sylvia. 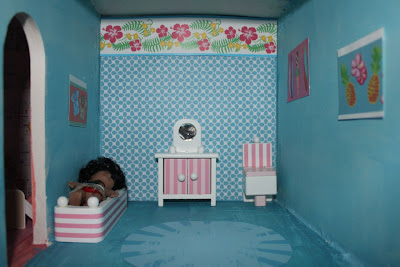 The bathroom was very blue.  I think the Maori girl in the bath is pleased we have given it a bit more colour with the pictures on the wall.  We also cut out some scrapbooking paper for the mat on the floor.  Maybe one day I will work out how to have a towel rack. 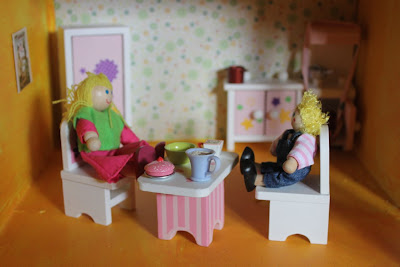 I love the kitchen but would really like to upgrade the furniture here.  The table is just too small and so is the stove.  After all don't we spend lots of time in the kitchen.  I am also keen to try making some dolls house food out of modelling clay.  (See update at the end of post.) 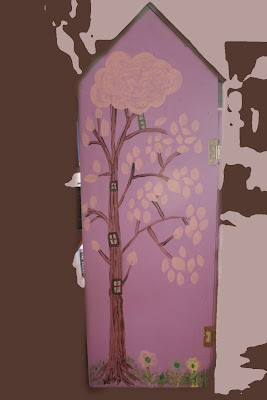 While one side of the dolls house is still a blank canvas, I have painted the other side with a tree inspired by this tree with pink leaves.   (Yes I played around with the photo on picmonkey.)  I painted this soon after we read The Faraway Tree.  Those familiar with the book might recognise the windows in the tree as homes of Moonface, Silky and Mister Watzhisname and also the ladder leading into the cloud at the top of the tree.  Sylvia painted a few pink leaves and then I took over. 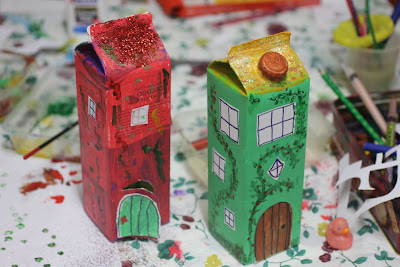 Now onto a few easier houses that can be made in an afternoon.  These milk carton houses were inspired by Red Ted Art's Blog.  We used a thicker paint than we usually use for craft.  Unfortunately it bypassed Sylvia's craft apron and lodged itself permanently on her dress.  The doors and windows are drawn on white paper and glued on.  The lids were painted and screwed on to make a chimney.  We also made the roofs sparkly.  Just because we could. 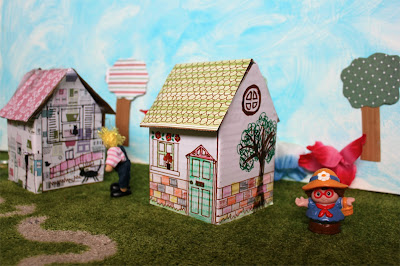 Most recently we made these cardboard houses inspired by these cute houses and some houses from a toy making book I was given as a child.  I made some templates and cut them out with separate roofs.  (It was a nice coincidence that the cardboard came from the packaging in which we received the amazing Building Stories by Chris Ware.)

We glued paper onto the cardboard and drew over it with textas and crayons before sticky taping the houses into shape.  Sylvia particularly loved colouring in the bricks different colours.  She also loved the cats on her house with one looking out the window at the one in the yard.  We love decorating these houses.  If only we had the space and time to paint the walls of our home too. 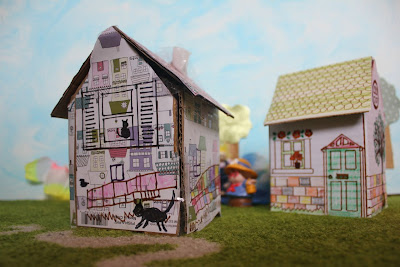 As I mentioned recently, I have noticed craft creeping more and more into the pages of this blog.  The more that I look at ideas for craft sessions with Sylvia, I am filled with admiration for the creations of some great craft blogs.  However at heart this remains primarily a food blog.  More recipes soon. 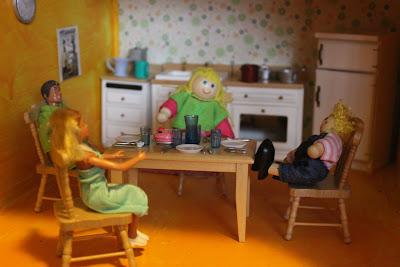 Update: After writing this post, I couldn't resist treating us to a new kitchen for the dolls house.  It meant we finally had enough room on the table to unpack the plates and cutlery that Sylvia was give for her birthday from her Irish cousin.  So much fun.
Posted by Johanna GGG at 13:37