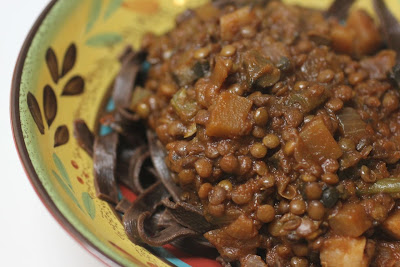 Finding a packet of chocolate chilli fettuccine at Coburg Farmers Market is thrilling (as Fancy Nancy would say).  I mentioned to the woman that I would use it in a savoury dish.  She looked at me askance but was too busy to discuss it.  Yet what to serve with the chocolate fettuccine remained a mystery to me.  Until I saw Steph's  Slow cooked ragu with fettuccine. 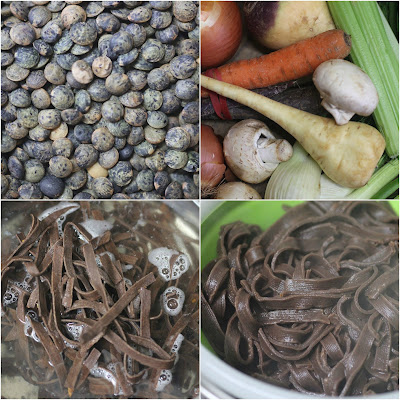 Upon opening the bag of fettuccine I was hit with a waft of chocolate.  Oh joy.  The cooked pasta was indeed, as promised by the nice lady who sold it to me, not terribly spicy but there was a slight kick after eating it.  A bit too spicy for Sylvia but she gallantly ate a small bowlful with parmesan. 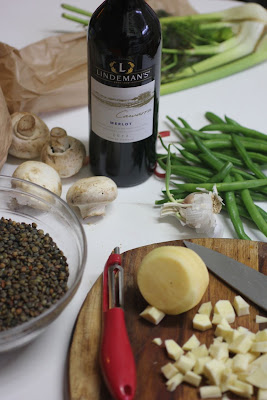 The ragu is a wintery stew that is perfect to serve with robust pasta.  Our weather has been grey and wet recently.  You know it is a lot of rain when it makes the headlines and the weathermen start talking about record rainfall.  Just the sort of weather to nurse a cold and have a stew simmering on the stove.  And if, like me, you need to do the kinder pick up, then a stew can easily be turned off to sit and wait til you return. 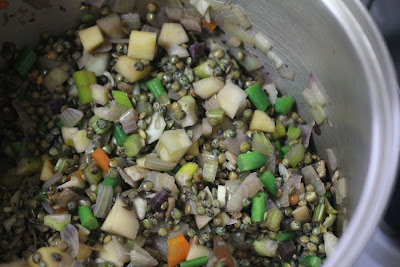 This is the sort of dish where you can clear out the wrinkled old vegies from the fridge.  Once they are softened and swollen with the slow cooking in wine and stock, they will be as good as they ever would have been at their peak.  The colours will disappear into the murky depth of the stew.  In the most pleasing way.

I loved how the chocolate chilli fettuccine added to the darkness.  But any fettuccine would work.  Or even a loaf of good bread or some brown rice, if that  is your preference.  After all this stew is all about comfort. 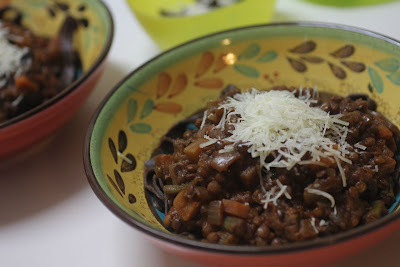 I am sending this taco filling to Nupur at One Hot Stove for My Legume Love Affair (#60), the monthly event celebrating beans and lentils and legumes, overseen by Lisa of Lisa's Kitchen and founded by Susan of The Well Seasoned Cook.

Cover the lentils with boiling water while you chop the vegies.  Mine kept absorbing all the water so I would just top it up a bit over this tine (20 to 30 minutes).

Dice the vegies in the order they appear in the list.  Heat the olive oil in a large stockpot and add vegies as you chop them.  (I peeled most of mine and trimmed the ends of the green beans.)

Add the passata, water, red wine, salt, stock powder, herbs and spices.  Taste the liquid to check it will be well enough seasoned.  Bring to the boil and gently simmer mostly covered (lid askew) for most of an hour.  About half way through I decided all that liquid would never go so I cooked it on high for about 15 minutes, stirring frequently until a lot of the water was absorbed.  Then I reduced heat again and let it gently simmer again.  If you have more time you could slowly cook it til you have the desired consistency.

When ragu is about ready cook the fettuccine according to packet instructions (or in my case where there were no instructions, gut instinct).  Serve ragu on top of fettuccine with lots of black pepper and parmesan cheese, if desired.

*Note: The pasta I used was made by M M Designer.

On the Stereo:
In the Night Garden (BBC TV soundtrack)
Posted by Johanna GGG at 21:41