A weekend of sparkles, puddles and an energy slice 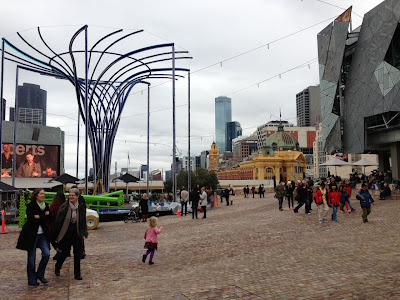 On the weekend we went to the city where we sat adoringly in front of Dorothy's ruby slippers at the Hollywood Costumes exhibition at ACMi.  In fact Sylvia and her little friend were dazzled by all the glitz and glitter on display.  I wish that I had a sparkly recipe to share today.  Actually I have had lots of interesting food during the weekend.  Just not many new recipes to share.  So I will give you an energy slice recipe which saw us through a busy weekend that started with a trip to the mechanic and ended with a squinky puppet show. 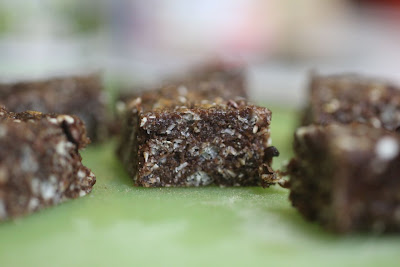 I made the energy slice on Friday after a visit to Wholefoods.  I love their energy balls but it seemed silly to pay for them when I had lots of neglected ingredients with which I could make my own energy slice.  I'd bookmarked a few sunbutter recipes in a hope of using some of the jar that taunts me from the shelf.  (I only bought it because Sylvia is allergic to peanuts but we both dislike it and my one baking experiment with it ended up in a batch of green biscuits!)

It was great to use up lots of things I haven't touched for ages - rice bubbles, spiced cocoa, cocao nibs, sunbutter, and rice malt syrup.  I also found my pantry was low in sesame seeds.  I liked the slice but I am still not keen on the sunbutter taste.  Any other nut butter would taste better.  Next time I might use cashew or almond butter and more seeds. 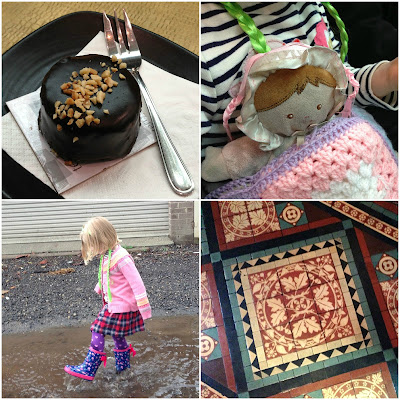 On Saturday we travelled by train to the city past creeks swollen by the previous nights thunderstorms.  The Hollywood Costumes exhibition was interesting but ridiculously busy.  My highlight was Scarlett O'Hara's dress made of the green curtains.  Afterwards we ate lunch next door in the Atrium.  Our soup and sandwiches were fairly uninspiring.  Across the way at Beer Deluxe we were more impressed with desserts.

I had flourless chocolate cake and E had white rocky road slice that he claimed was the best slice ever (which is more than he said about the sunbutter slice but at least he is eating it unlike Sylvia).  The cafe also had crochet rugs and soy babycino to keep us warm.  Lunch was followed by a wander through the beautiful St Paul's Cathedral and a visit to the park so Sylvia could splash in puddles. 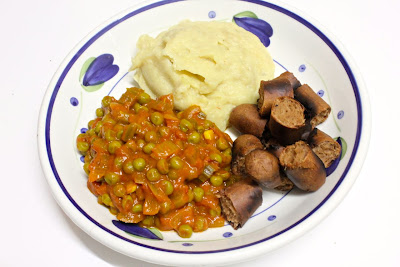 At home I made a quick pea curry to eat with leftover beetroot curry and rice.  The two curies paired exceedingly well.  I didn't take any photos.  Instead I have a photo of the leftover pea curry that we ate with vegie sausages and a potato-cauliflower mash.  I must make that pea curry more often. 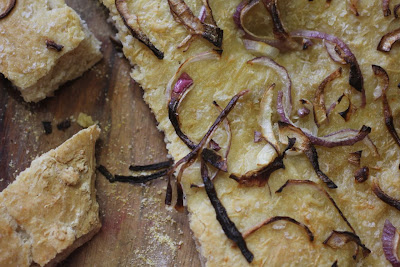 On Sunday morning I rose to make focaccia, pikelets and sushi.  The bread was a riff on the recent rhubarb and raspberry focaccia.  I had been dreaming of remaking as a savoury bread.  I added parmesan to the dough and topped it with onion, parmesan and salt.  Too much salt.  The onion could have been cut a bit thicker and I probably shouldn't have returned it to the oven for 10 minutes because it was so pale.  Using a quarter wholemeal flour was fine though.  I will revisit and hopefully be happy enough to write more about it. 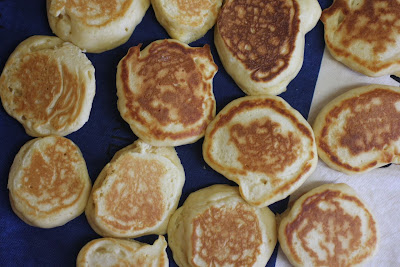 The sushi and pikelets were made for my niece's birthday lunch.  Sylvia was very excited and wrapped the presents all by herself, as well as writing in her card.  She also helped rolling the sushi.  We made it plain with just rice in nori sheets so it would please the fussy eaters (by which I really mean Sylvia).  I made the pikelets on a whim.  My curiosity was piqued after making picklets recently. 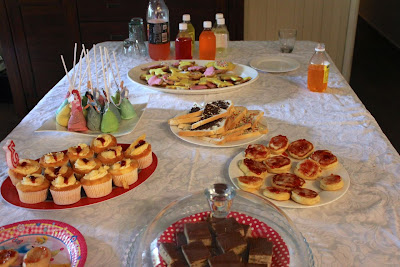 The pikelets were really easy to make.  Erica spread them with butter and jam.  They did me proud on a table heaving with butterfly cakes, peppermint slice, gingerbread biscuits and fairy bread.  They were tubby little pikelets so I will try the recipe again with a bit more milk.  In fact they were like a maiden aunt to the glamourous princess cake pops that Erica made.

The cake pops were sparkly skirt shaped with cut outs of Disney princesses above them.  If I was a little girl, I would have been very excited to have these for my birthday.  They appealed to both young and old.  The birthday girl loved them.  So did Sylvia.  In fact she had a lovely time despite wet feet from muddy puddles and admitting to eating too much sweet food. 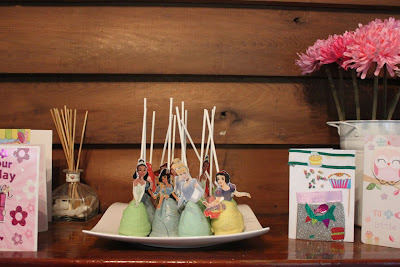 After a wet drive home (apparently there was no rain back in our neck of the woods), we went to friends' for a lovely dinner.  Sylvia had fun playing with two little girls.  She could be seen carrying around squinkies in a net and announcing a puppet show called Squinkies on Holiday.  A fun weekend!

And for those of you wondering about the car at the mechanic, there were no problems.  It was merely a precautionary visit to check some small problems weren't indicative of bigger problems.  It made driving more comfortable for me, and meant that my parents could breathe easy as they relaxed in the Budapest public baths.

Previously on Green Gourmet Giraffe:
One year ago: Lovely lunches: zucchini pizza bites, fritters and a sandwich
Two years ago: Design Dilemmas
Three years ago: Banana Weetbix Muffins for Sylvia
Four years ago: Green and black cupcakes
Five years ago: Rabbiting on about Cheese and Rarebit!

Mix sunbutter, rice malt syrup, maple syrup, vanilla essence and salt.  Stir in remaining ingredients.  It will make a very stiff mixture so I ended up using my hands to mix the ingredients in.  Press into a lined 20cm square baking tin.  Eat.

On the Stereo:
The Columbia World Library of Folk and Primitive Music - compiled by Alan Lomas
Posted by Johanna GGG at 21:36