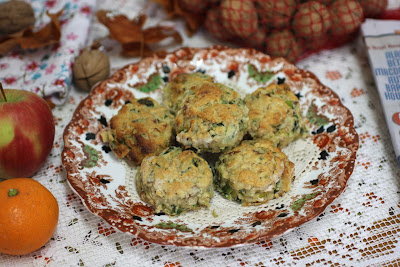 I see a lot of scone recipes online.  In fact, I counted 50 scone recipes bookmarked on my Delicious account.  So when I say that one of these recipes has been calling to me, you know it has to be good to stand out from all the rest.  When I saw a bag of fresh walnuts at Coburg  Farmers Market a couple of weeks ago, Immediately thought of Karen's Wensleydale Cheese, Leek and Walnut Scones that I have hankered after ever since she wrote about them. 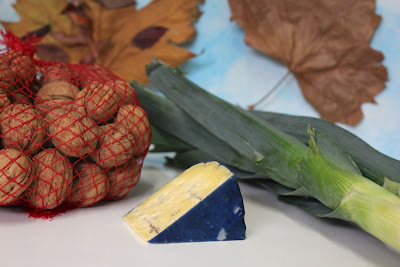 My memory wasn't quite as accurate as I initially thought.  I decided to make the scones but I thought it was blue cheese rather than Wensleydale.  Or perhaps my mind was just accommodating the lack of Wensleydale cheese at the market. 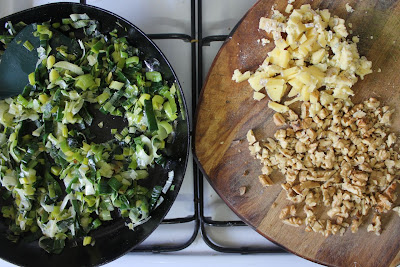 When E was disappointed at the hot food offerings at the market, I said I would make scones for lunch.  This is not a scone recipe to make in a hurry.  Especially if you have to shell the walnuts as well as fry the leeks. 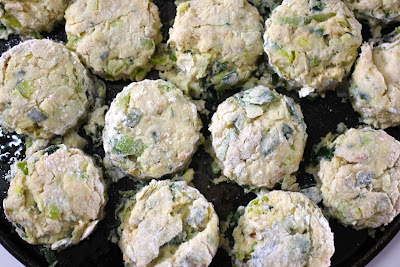 Best to make it after spending a morning sampling food at the local farmers market.  No one will complain about the scones not being ready before mid-afternoon. 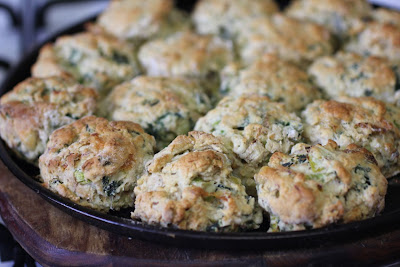 On the other hand it is a recipe that is lunch in a scone.  It is full of vegetables and protein.  E didn't think I should use as much cheese as Karen did.  I think he was right.  I halved the amount of cheese and yet the blue cheese flavour made its presence felt without being overwhelming.  Yet Sylvia wasn't that impressed.  There were too many bits for her.  E found them pleasing. 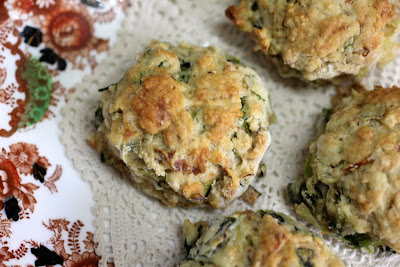 I was excited that they were every bit as good as I had anticipated.  Full of flavour.  Enough blue cheese to make it feel decadent.  Enough leek to make it feel healthy.  With the occasional crunch.  Soft and pillow.  I had to take lots of photos.  They were truly glorious.  Perfect for a lazy autumn afternoon in a kitchen that is crowded with farmers market produce. 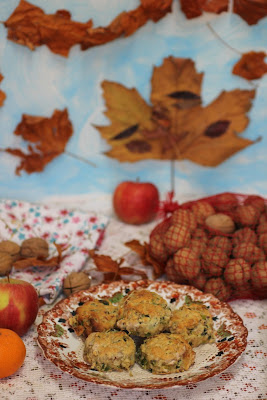 I am sending these to Jac's Bookmarked Recipes event.

Leek, walnut and blue cheese scones
Adapted from Lavender and Lovage
Makes about 18 to 20 scones

Trim leek, cut in half lenthwise and wash well.  Slice leeks and fry in 2-3 tsp of butter until soft.  Set aside.

Rub 50g butter into flour and salt.  Stir in leeks, blue cheese and walnuts.  Lightly beat egg with 1/4 cup milk and gently stir into flour mixture to make a soft dough.  Add remaining 1/4 cup of milk if required.  (This will depend on the leeks.)

Tip dough onto a floured board - flour hands well if a bit sticky.  Pat down to about 2 cm thick.  Dip scone cutter into flour and cut out scones.  I found it hard to cut cleanly because of the leeks.  This just adds to the rustic look of the scones.  Place scones on prepared tray.  I place them close together so that sides are softer.

When the scones come out of the oven wrap in a clean tea towel - apparently it keeps the crust softer - I do it because my mum always did.  If you have any cool scones left, keep them in an airtight container - or do as I did and leave them on the bench until dinner when you decide to eat leftover scones with soup.

On the Stereo:
Apartment Life: Ivy
Posted by Johanna GGG at 21:59