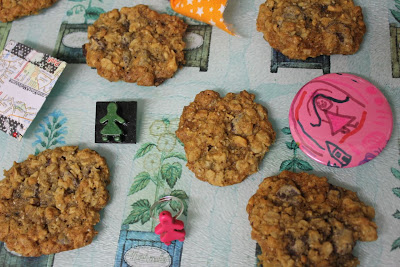 Our Queen's Birthday long weekend was unexpectedly full.  Wandering through the Coburg Carnivale.  Walking along the beach.  Craft projects.  Eating choc chip cookies.  I even managed a trip to the movies. 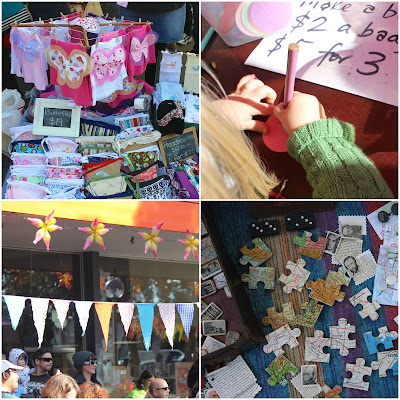 Coburg Carnivale packed a lot into the small Victoria Street mall, with a Suitcase Rummage in part of the supermarket car park.  No doubt our enjoyment of the event was helped by the blue skies and colourful bunting.  It was also nice to see some familiar faces. 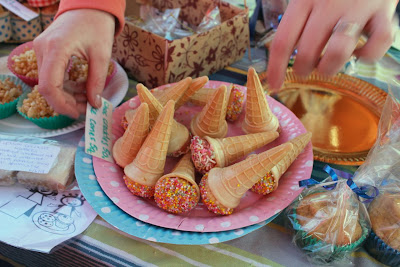 Girl guides showed us how to tie reef knots with lolly snakes.  Sylvia made a pink badge, ate a cake in an ice cream cone and spent hours looking at little and tiny broaches.  I bought her a top with wings on it.  E bought CDs for 50c each.  We watched go go dancers dressed in school uniforms in tribute to Chrissy Amphlett and a performance of 'Step in Time' from Mary Poppins.  Sadly we missed seeing the Morris dancers and the merimbula band.  Our trip ended with a curry at Sarabella Cafe and a visit to the library. 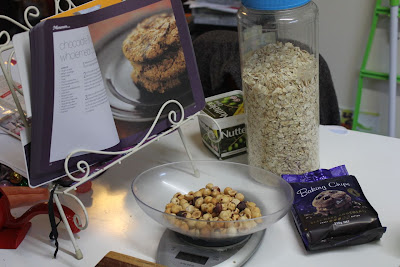 After the Carnivale, we went home to relax and bake.  I've had my eye on these biscuits for some time now.  I discovered the recipe when trying to rid myself of a few cookbooks.  A while back I went through a phase of feeling the need for more chocolate cookbooks.  Then I had too many.  I decided that the Enjoy chocolate: recipes to make you go mmm cookbook made me go hmmm.  The cover was cut to ribbons by a small girl and many of the recipes were ones I was unlikely to make or already had elsewhere. 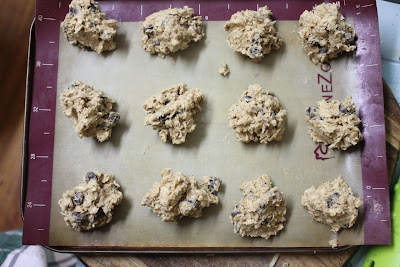 I am always reluctant to get rid of any cookbooks.  So before any go, I usually try and find any recipes I might want to make.  The hazelnut, oat and coffee choc chips biscuits looked so good and a wee bit healthy.  Instead of the coffee, I planned to substitute some lovely smoky hazelnut agave syrup and some ground wattleseed.  This made them more exotic than your regular choc chip cookie. 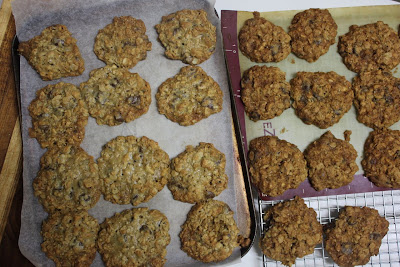 I love baking choc chip cookies.  I bake them regularly enough to be surprised when a recipe directs to bake them for 16 to 18 minutes in a 190 C oven.  It seemed rather a lot.  I cursed myself for not following my gut instinct when they came out of the oven looking rather well cooked.  We like cookies soft and chewy rather than crisp in this house.  I cooked the second batch slightly less.  Yet the darker ones were just as soft and chewy. 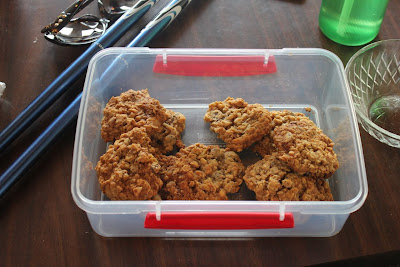 The recipe said it made 24 biscuits.  I made about twice that.  Fortunately I had plans to share them.  We visited friends at Point Lonsdale on Sunday.  Jane and Andrew made us a lovely spread of DIY sandwiches at their holiday house.  We were quite a crowd and I was pleased that the box of biscuits was welcomed after lunch.  Everyone loved them.  They were very nubbly with oats and hazelnuts, but still managed to taste decadent with the choc chips.  In fact they were so good that I wondered at the wisdom of getting rid of the cookbook. 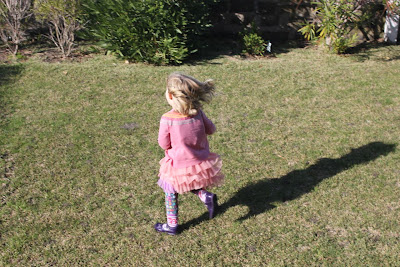 There was enough winter sun to eat on the deck.  After lunch we went to the beach.  The tide was in and we watched people standing along the sea wall being drenched by the waves splashing over them.  We stopped briefly at a playground and then walked on to the pier and lighthouse.  The walk gave us a renewed appetite and we ate the remaining biscuits back at their house. 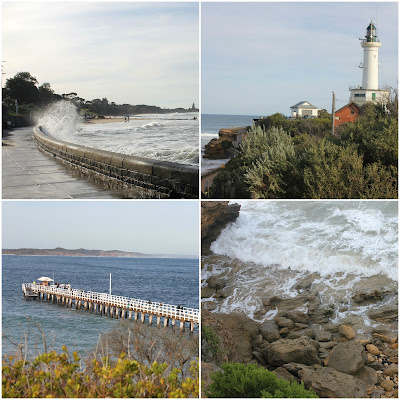 While we were in their neck of the woods, we visited my sister and kids.  Susie had baked a banana cake and Grace and Ella were in the mood for craft.  They raided the recycling bin for old boxes to make into traffic light signs.  The boxes had an opening so we used them as a postbox to write notes to each other. It was great fun.  Sylvia drew pictures for her notes and can now write her name.

Finally the Monday was a quiet day at home for E and Sylvia.  I went out but thankfully not until after lunch.  Fittingly the film I saw was called Farewell My Queen.  Just right for the end of the Queen's Birthday long weekend.  Set in the last days of Marie Antoinette life, it was very beautiful to watch, both in the opulent royal chambers and in the simpler servants rooms.  It was an interesting insight into a turbulent time in history and made me reflect on life before social media.

I am sending these choc chip cookies to the Four Seasons Food Challenge, a new challenge to promote dishes inspired by the season.  Actually this is a European challenge so I am out of step with their seasons but these biscuits were eaten on the deck of a beach holiday house in the sunshine so they would go just fine with the theme of Picnic Food and Outdoor Nibbles.

Hazelnut oat choc chip cookies
Adapted from Enjoy chocolate: recipes to make you go mmmm
I made about 50 biscuits (cookies)

Cream butter and sugar.  Beat in egg.  Stir in flours, bicarb soda, wattleseed and salt, then agave, then choc chips, oats and hazelnuts.  Mix until well combined.  Drop dessertspoonfuls of mixture on a lined oven tray and bake for 14 - 16 minutes at 190 C or until golden brown.  (NB my slow oven baked then quite brown in 16 minutes so watch them if your oven is quite powerful.)