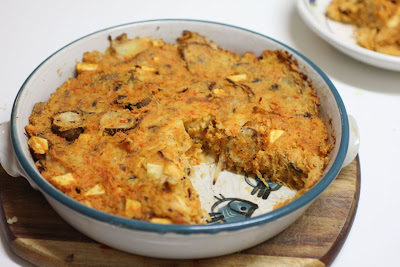 It's sauerkraut, sausages and potato but not as my ancestors knew it.  Yes, I do have German ancestors and perhaps that is why I have been seeking vegetarian bratwurst that would be as amazing as the one you find at the Vic Market.  I was quite excited to find some at Radical Grocery.  I had planned that they would be eaten in bread rolls with mustard and sauerkraut.  Then I got distracted with other ideas. 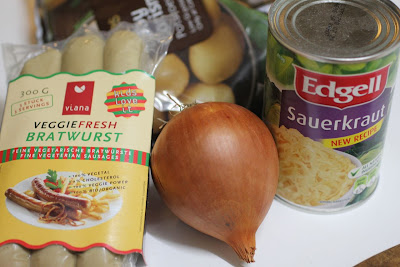 I became fascinated by the idea of sauerkraut in a casserole.  After searching the web I had a few recipes I liked.  Fortunately I made these on a night when E was out at the school information night.  (Yes, Sylvia will start school next year.  Don't ask me where the years have gone!)  This gave me plenty of time to fry and rinse and grill.  It wasn't a quick recipe. 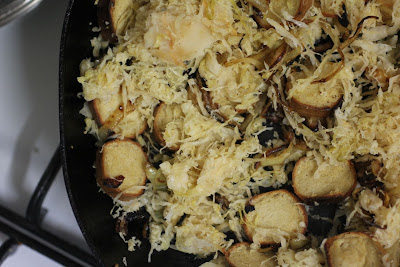 Yet again, Sylvia ate her dinner and was in bed before our dinner was ready. As is my way, I gave her some of what I was putting in our dinner, just to taste.  I thought she would like the bratwurst sausages.  She ate a little.  Then she decided she didn't like them because the sausages were too white.  Sigh!  It is hard work to try and expand the culinary horizons of a 4 year old. 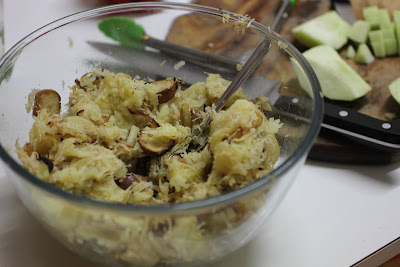 I was concerned that the casserole might be quite heavy with sausages and potato.  The Vegelicious recipe had soy cheese and I had a mind to use regular cheese that I had in the fridge.  Then I saw Amber Sheas vegan nacho cheese sauce.  It was brilliant.  So simple and so tasty.  This was one of the simpler vegan cheese sauces I have made.  Red capsicum made the cashews creamy with 3 to 4 minutes in my little blender.  I kept it fairly bland because the rest of the casserole was big on flavour. 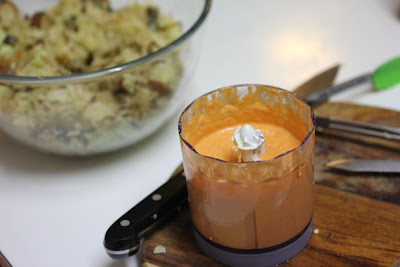 I was very pleased with the casserole.  It was not as heavy as I feared.  Rather, it was very tasty with intense flavours from the sausage and light from the apple.  Everything melded together quite well.  I had thought E might protest at the apple.  He usually finds any fruit in his meals to be too much fruit.  But he didn't even notice it.  I took that as a sign that it worked. 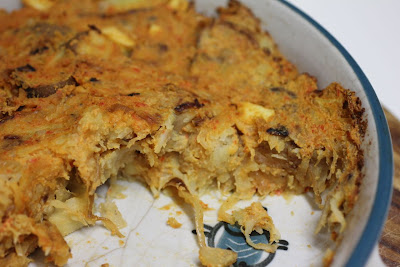 I served it with some plain steamed vegetables.  (The below photo is on the second night when I reheated it in the oven and had time for more vegies than a few carrots and brussels sprouts.)  Roast vegetables would be great with it too.  The casserole didn't slice up neatly thanks to the sauerkraut.  That is fine with me.  After all this is peasant food.  I assume I didn't descend from German nobility. 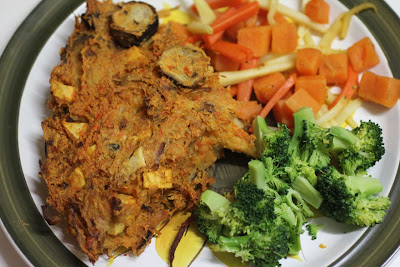 Thanks to the red capsicum, the casserole turned out which orange.  So I am sending it to Catherine's Anyone can cook Vegetarian challenge.  This month the theme is orange.  Actually I re-read the rules and Catherine has said it should feature an orange food.  I hope that an orange coloured cheeze sauce will fit the bill.

Sauerkraut, bratwurst and potato casserole
Inspired by Greyt Vegan Life, Vegalicious and Amber Shea
serves 4
Red pepper cheeze sauce:
Soak raw cashews for the sauce for 20 minutes in boiling water.
Cook potato for about 20 to 25 minutes until  soft.  Grate.
Fry the onion slices in a splash of vegetable oil for about 20 to 25 minutes until soft and caramelised.
Cook the bratwurst under the grill (broiler) until brown and slightly crisp.  Chop into about 1cm slices.
Make the sauce by blending all ingredients until smooth (I did this in my small blender attachment for my hand held blender).
Mix grated potato, fried onion, sliced bratwurst, well rinsed sauerkraut and apple in a large bowl.  Stir through cheeze sauce.
Tip into a large shallow casserole dish and smooth over the top with the back of a spoon.
Bake at 180 C for 25 minutes or until golden brown and crisp on top.  (I cooked mine for 25 minutes and left it for another 30 to 45 minutes in the oven after I turned off the oven.)  Serve in wedges with vegies.

*NOTE: I think that tofu bacon would work as an alternative to the bratwurst sausages.

On the Stereo:
Adagio 2: Herbert von Karajan
Posted by Johanna GGG at 23:30