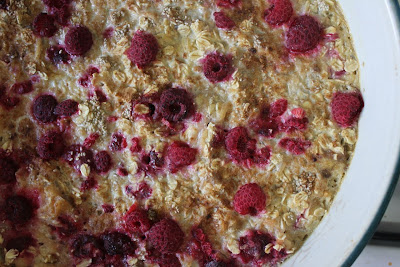 It has taken me a long time to come around to enjoying porridge.  I remember being a child and my older sister and my dad eating porridge.  It was so gluggy and gloopy that it was a mystery as to why they loved it.  Finally this autumn I started eating it each morning.  And loving it.  So much so that I decided to try a baked version this weekend.

Firstly let me tell you how I learned to love the glug.  We go through breakfast fads in our house.  When E and Sylvia were eating a boiled egg every morning, I shuddered at the idea of eating them, despite wanting to eat out of those cute egg cups.  It was a different matter when they started each day with a bowl of porridge.  I love so much food with oats that it seemed odd to not eat porridge.

I started to eat a spoonful of Sylvia's leftovers occasionally.  Then I started to try a little porridge with a lot of fruit (see above) and now I really love it.  We usually make porridge in the microwave.

I was intrigued with how porridge would taste if baked in the oven instead of microwaving it.  I was initially interested in Heidi Swanson's baked oatneal.  Then I saw Jo at Including Cake had a simpler version without egg and baking powder.  Her baked oatmeal was more like our porridge but baked rather than microwaved.  I finally had time over the long weekend to try it.

I normally load my usual porridge with fruit after it is cooked.  I loved how the fruit was cooked in the baked version.  It was plenty sweet enough  but it was quite soft and even a little milky.  I am not into creamy milky breakfasts.  I had hoped it would be more crunchy around the edges.  For now I think it is simpler to stick to the microwave version.

In the future I see more experiments with baked porridge.  I may even experiment with pinhead oats or stovetop porridge (as recommended in The Guardian.)  Below are some ideas to guide me.  I am sending this baked porridge to Elizabeth's Kitchen for this month's Breakfast Club.  The theme is high fibre.

Mix everything together in a medium mixing bowl.  Pour into a greased shallow ovenproof dish (I think mine is about 30cm in diameter).  Bake at 180 C for about 25 minutes.  Serve hot.

On the Stereo:
Absent Friends: Divine Comedy
Posted by Johanna GGG at 20:04