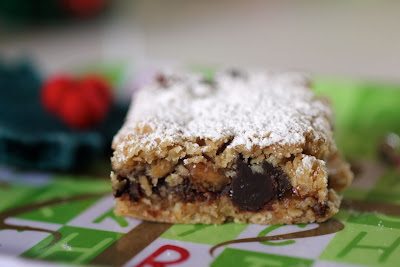 This morning I went for a swim and afterwards I was happy.  Not bursting with happiness at big life changes.  Just feeling good about little stabs at happiness.  Perhaps it was the swimming or the winter solstice heralding longer days or the fruit mince slice waiting at home.  So after some recent cranky posts, here is a happy one. 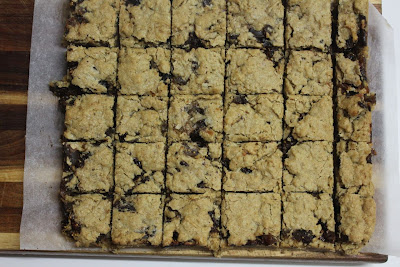 Yes, as I left the pool, life felt good.  I had left E and Sylvia happily building bunk beds for her dolls using cardboard boxes, rulers and masking tape.  I walked out onto a clean verandah that we had brushed and mopped yesterday.  I had swum a kilometre.   I had good bread and fruit mint slice at home to eat for lunch. 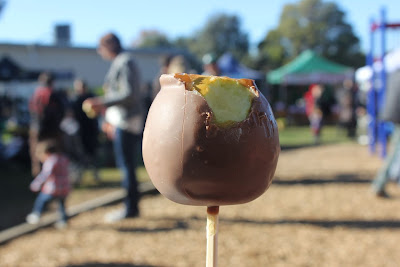 I thought about yesterday.  A walk to Coburg Farmers Market to buy fruit and vegies, talk to stall holders about what I had made with their ware (the chocolate pasta lady could not believe I served it with ragu) and share a chocolate toffee apple in the sun.   We ran into a friend whom I have been meaning to contact for too long. 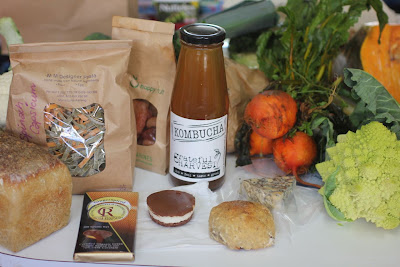 I love farmers markets for the unexpected finds.  We bought capsicum and spinach pasta, dried nectarines and ginger chocolate.  It was very exciting to find romanescu cauliflower and golden beetroot.  Then as we were about to leave I found myself intrigued by the kombucha stall.  Kombucha, a fermented tea with many health claims, is not something you see often around these parts.  This may explain why the woman at the stall was so forthcoming with information about it.  We walked away with a bottle as well as a raw choc mint tart. 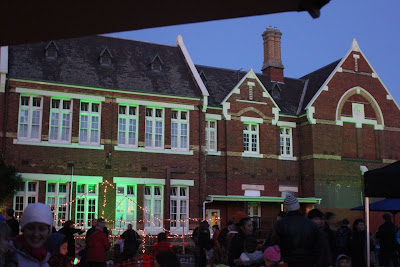 In the evening we went to Brunswick South Primary School for their Winter Solstice Festival.  As an aside, I am gladdened to see more winter solstice celebrations happening in Melbourne (Collingwood Children's Farm and Federation Square were other places holding events).  It really does cheer up a gloomy winter.  While Christmas brings joy to winter in the Northern Hemisphere, I hope that we can embrace a wintery festive season here and enjoy Christmas twice a year. 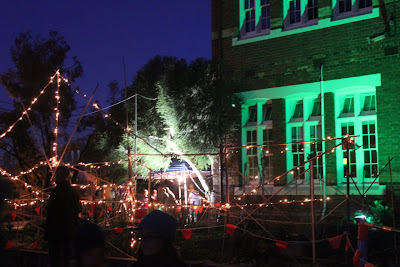 When I had read that the solstice celebrations included a lantern parade I thought we would be watching it.  Instead everyone walked around the school in a spectacle of bobbling lights.  As we walked we recognised one of Sylvia's kinder friends beside us.  It was lovely to walk along seeing Sylvia's and her friend holding hands and carrying their lanterns. 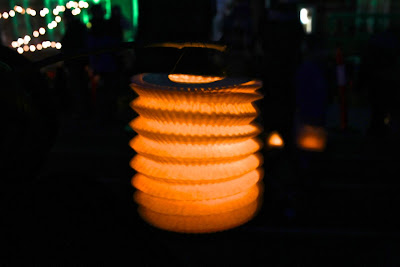 Then we watched the lighting of the bonfire (much smaller than I remember in my childhood and fenced off so there was no toasting marshmallows or any other activities that might threaten health and safety).  It did look great with the school lit up behind and the fire dancers twirling in front of it. 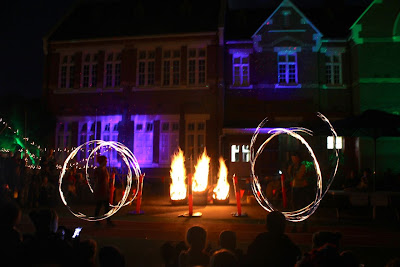 There was soup and pizza available but by the time the fire dancers had finished, we were ready to go home.  We considered tinned soup and toast on the way home but the lure of the brightly lit fish and chip shop was too enticing.  After Sylvia had gone to bed, we watched a movie called The Wicker Tree (not nearly as good as The Wicker Man) with hot chocolate and fruit mince slice. 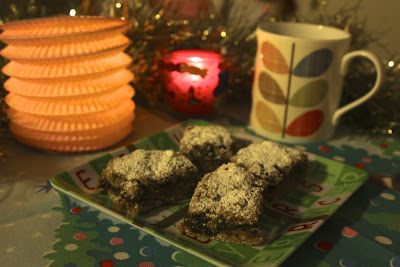 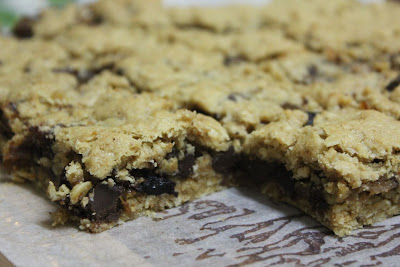 I made this slice just before picking up Sylvia from kinder and was rather pressed for time.  I gave it exactly 30 minutes as the recipe said - though I turned up the oven a little.  In an ideal world I would have let it brown a little more.  I also absent-mindedly used a little less butter and a little less flour than Laura at How to Cook Good Food.  I think a bit more oats in topping would have made the dough firmer and crispier.

It was best on the day of baking.  E and Sylvia had a piece each crumbled over strawberry yoghurt.  Sylvia loved the slice - but without the fruit!  E thought it would be delicious with cream or custard for dessert.  I love it with a cuppa tea.

Cream butter and sugar (but beaters or hand - I used nattalex and just stirred mine vigourously with a spoon).  Stir in flours, oats and bicarb of soda.

Spread about three quarters of the mixture into the prepared tin.  This isn't easy - best to drop little blobs and spread them into each other.

Mix fruit mince, grated apple and chocolate.  Gently spread over the base in the cake tin.  Now spread the remaining oat mixture onto the fruit mince mixture.  It doesn't have to cover the fruit mince completely.

Cool in the tin.  Cover in icing sugar (I used a small sieve to scatter it evenly).  Slice into squares or bars (I cut about 30 squares).  Keep in an airtight container (ours has lasted 3 days so far).

*NOTE: I used my own home made fruit mince which was made in December.  It had dried out a little in the fridge but was also a bit dry to start with.  I added apple to give a bit more moisture but might not if using jarred fruit mince.  I also thought more chocolate would be good or maybe even heating the chocolate in the fruit mince to have it throughtout the slice rather than occasional chunks.

On the Stereo:
Sigh no more: Mumford and Sons