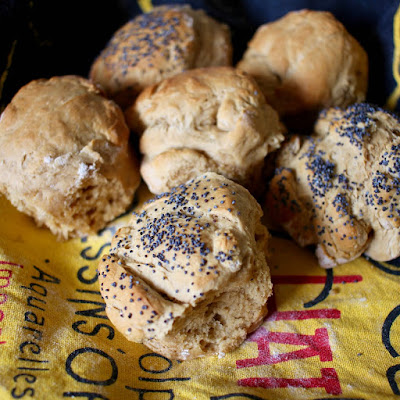 When we were young my family often had scones.  My brother one day asked for scones with vegemite and cream.  We all laughed at him.  Scones were sweet.  Vegemite is uncompromisingly savoury.  These days the line between savoury and sweet is more blurry.  I have made many savoury scones and the idea of putting vegemite on or in scones no longer seems so odd. 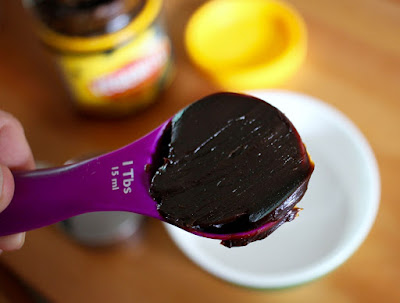 I was inspired by a recipe for Marmite and Poppy Seed Cookies.  I wanted to make scones so I adapted the recipe.  The scone recipe was quite similar to the cookies but a lot less butter, far softer and best eaten fresh.  I added a similar amount of vegemite but if you love the stuff I reckon you could add more. 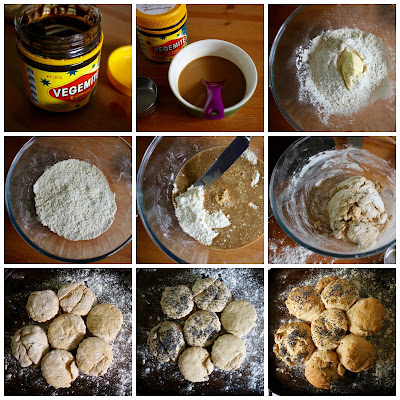 Originally I had visions of a dark black scone.  It was more of a warm caramel colour.  The flavour was also quite subtle.  There are hints of the intense yeasty salty black paste that pleases Aussies and bemuses foreigners.  It made them lovely to eat plain.

I took one to Sylvia to eat before her after school swimming lessons and she enjoyed it.  (Hence the scones without poppy seeds.  I'd made a promise.)  They would also be lovely with margarine, hummus or cheeze spread.  My main regret was that I made a small batch.  They disappeared far too quickly.  Next time I will double the recipe.

Mix milk and water with vegemite.  (It is easier to start with a little liquid and vegemite and then gradually add more mixture.)

Place flour and salt in a bowl. Rub in margarine with your fingertips (or as you normally would do – pastry cutters, food processor etc) til it resembles fine breadcrumbs. Pour in vegemite milk mixture. Mix in gently with a knife until it forms a soft and slightly sticky dough.

Turn out dough onto lightly floured surface and knead briefly til smooth.  Pat dough out to a 2cm thickness. Dip biscuit cutter or glass in flour and cut as many scones as possible from dough. Place scones on a baking tray. Lightly knead off-cuts into a ball and press out again and cut more scones. Repeat until all dough is used.

Brush the scones with a little milk and sprinkle with poppy seeds. Bake in over for about 12-15 minutes until lightly browned and sound hollow when tap on top. Remove from tray and wrap in a clean teatowel. Best eaten on the day of baking.

On the Stereo:
All that Jazz: the best of Ute Lemper

Week 2's theme is International.  Today is an Australian variation on scones.
Posted by Johanna GGG at 12:33