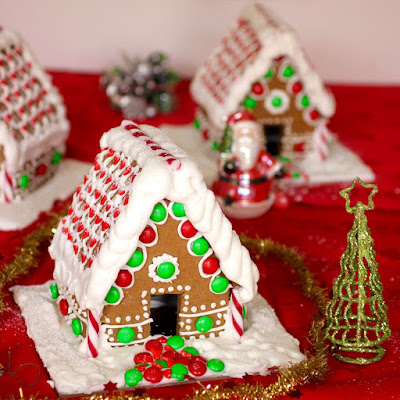 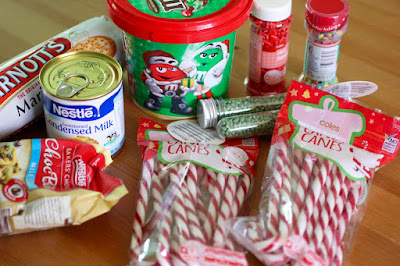 A few people have said it must have taken time.  I have blithely replied that it has taken a few years off my life.  Yet I don't want to live forever and am happy to donate those years for the satisfaction of having made the gingerbread houses.  After all, giving them away is probably good for my health when you look at the sweet stuff for the houses.  (Actually not all of the above sweetness went to the gingerbread houses.)

I only made three gingerbread houses for the raffle prizes.  The fourth gingerbread house was for us.  So the first three were made while Sylvia was either at school or asleep and I could focus.  By the time I had made the first three I had learnt a lot.  Which meant making the fourth should have been easy.  However decorating with Sylvia required patience and compromise. 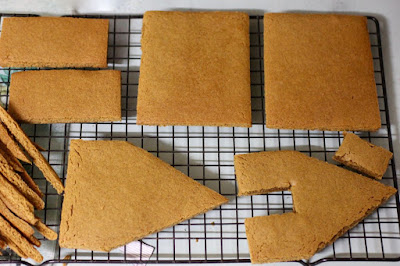 I decided to make the gingerbread I made for the previous gingerbread house.  I know it held together and it tasted really good too.  I wanted a few small gingerbread houses rather than just one big one.  I found a template at BBC Good Food.

Four small houses was more work than one but more learning too.  In the above photo you can see the sticks from trimming the risen baked gingerbread to fit the template.  I trimmed them when they had cooled just enough for me to hold the template over them without burning my hand.  I read somewhere that it is best to overbake than underbake the gingerbread, the less rise the better and not too thick because that makes it heavy to hold up. 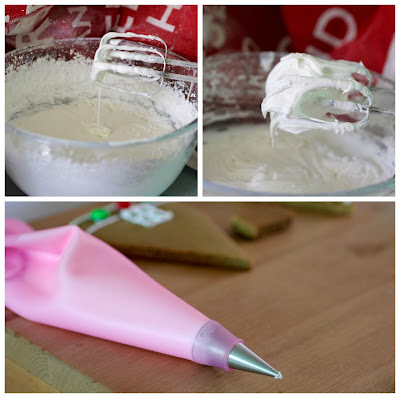 I wonder if I would have made these gingerbread houses if not for the wonder of aquafaba.  I had considered making a vegan royal icing for my last gingerbread house bit it was too challenging.  Now that I have had a few goes at beating aquafaba and sugar, I was more confident to try it this way. 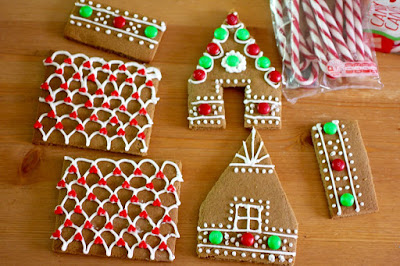 I tried just substituting aquafaba for eggwhites and it was too runny (see top left picture above) so I added more icing sugar and some cream of tartar and it was stiff enough (see top right photo).  It was brilliant for decorating the houses with fine lines and dots.  (I still had a sore hard from all the icing.)  It was great for gluing the houses together.  And it hardened up as royal icing should so that it keeps a long time.

However when I tried to pipe snowy edges around the roof it drooped in a way that I am not sure the egg white royal icing did.  I wondered if it made a difference that I did the roof trimmings after keeping the royal icing in the fridge overnight and piped the decorations when the icing was fresh.  More experiments are required.  (As if I make gingerbread houses every day!) 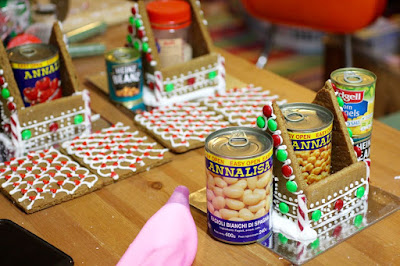 I had the same worries that I had last time about the houses collapsing.  Yet they were pretty good, particularly as they were quite small.  The only problem was one wall had a crack in it.  I did a little bit of structural engineering with a candy cane glued behind it on the inside and it seemed to hold together.  I was pleased to find small silver cake boards in a $2 shop that cost me $1 each. 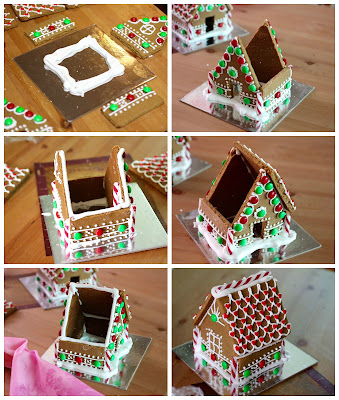 I used a medium nozzle in piping the joins between the walls and rooves.  This how-to-assemble-a-gingerbread-house video was useful in getting my head around how to put everything together.  I found that the rooves in the template a bit too small and were better when I added a bit of length in the fourth house. 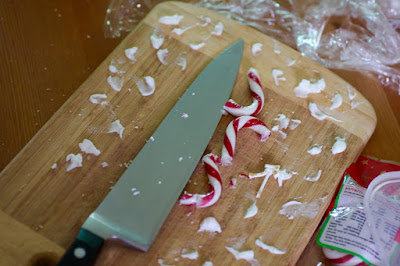 I had decided to use candy canes along the joins of the walls and the top of the roof.  In my last house the liquorice I used where the walls met was not straight and the marshmallow on top was pretty horrid tasting.

I found myself in the supermarket chatting to staff about how to break candy canes and whether it was simple or needed a particular technique.  We decided Professor Google would know.  But after searching online, I found it was usually just a matter of chopping firmly with a good knife.  Occasionally they shattered but usually were a clean break.

Also above you will notice that I used the chopping board to wipe all those little bits of icing that get everywhere when piping. 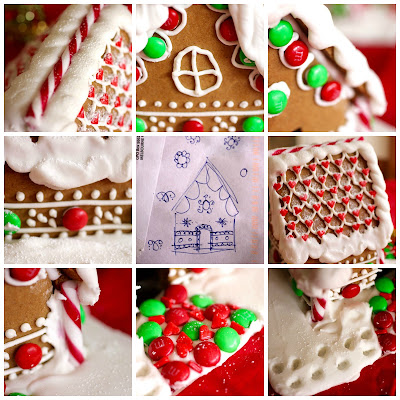 Before decorating the houses, I looked around and scribbled ideas and then just did it.  It was a bit of trial and error.  I really liked the little love heart decorations on the roof.  I piped round tiles on the roof and stuck the hearts where the joins where.  I think I would try doing a more ordered front path with green lining the outside and red inside next time.  Sylvia added footprints to the snow. 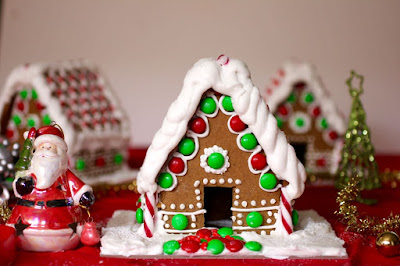 And then they were done.  It took me three days.  Wednesday I made the dough before tea while Sylvia played with a friend and baked the pieces in the evening.  Thursday I piped decoration during the day and put together the walls in the evening with help from E.  Friday morning I put on the rooves and Friday night I made more royal icing (this time was more icing sugar all added at once - it was too thick and had to be thinned out) to coat the yard around the house with snow. 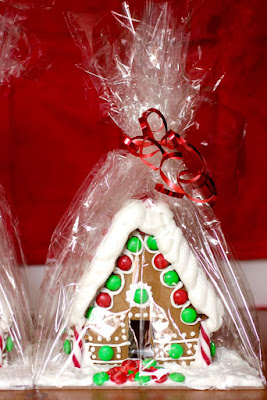 On Saturday morning I photographed the houses, wrapped them in cellophane and took them in for the raffle.  And then on Sunday we started making a gingerbread house all over again, as I had promised Sylvia.  This time we took it a bit slower. 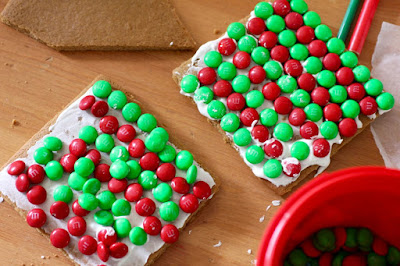 I really love including Sylvia in baking but gingerbread houses require a lot of patience and precision that kids don't have.  Firstly I agreed to let her have a go at piping icing on the gingerbread.  She managed to pipe with such gusto that the piping nozzle flew out of the piping bag and splodged icing everywhere.  Which meant more icing on the rooves than I had planned.

We both had a go at drawing plans and arranging lollies on the gingerbread to develop a design.  It didn't quite work as planned.  I agreed to try lining the rooves with m and m's.  Sylvia was keen to do it but then thought it fine to threw a handful of lollies higgledy piggledy. 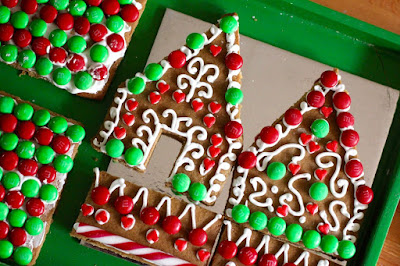 So I managed to get some good piping done around and above the door but the piping on the back was pretty random.  Sylvia did the design for the short walls.  I was happy enough with my piping decorations but it was much harder with a 6 year old about.  Honestly, it took long enough without a 6 year old above. 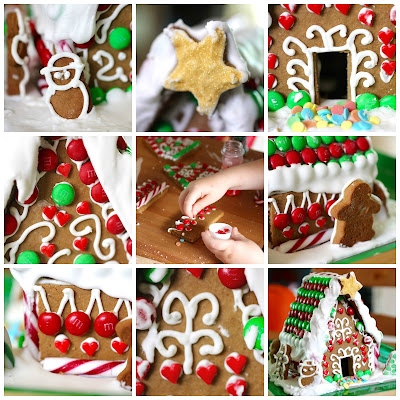 One of the differences with the last house was that I made two batches of gingerbread for the first three houses with barely a scrap of dough over.  I used another batch for the fourth house with enough to make gingerbread men and snowman/  It amused me that I piped outlines around them and yet Sylvia had one with the icing facing the house.  I suggested the wee man turn around but Sylvia said he was looking at the house.  What can you do in the face of 6 year old logic! 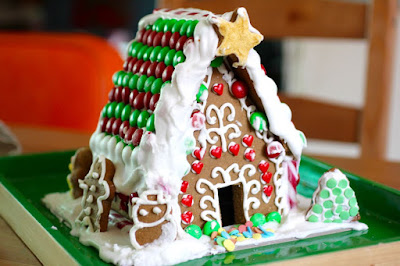 So this is the gingerbread house we have at home.  I am planning on taking it down to my parents' house for Christmas. Sylvia is already impatient to eat it.  I am enjoying a little time to admire it.

I am sending this gingerbread house to Lucy and Lauren for Fabulous Foodie Fridays, to Karen (and Janie) for Tea Time Treats, and to Mandy (and Kirsty) for Cook Blog Share.

Two batches of this gingerbread dough to make 3 houses (ie the same amount that the recipe uses to make one house.)  Make houses as per instructions but use below measurements for small houses and the vegan royal icing for an egg free icing.  If you want a completely vegan gingerbread house there are lots of vegan gingerbread recipes such as the ones at Vegan Dad or Two Green Peas.

Templates
from BBC Good Food or use these measurements:

Beat aquafaba until quite frothy.  Gradually beat in sugar and cream of tartar until you have a stiff mixture that holds its shape but can be stirred.  Keep covered with clingfilm while not using and keeps in the fridge in airtight container overnight but I think it might lose a little of its firmness.

NOTES: I tried making another batch of royal icing with 4 tbsp aquafaba, 1 tsp cream of tartar and 400g icing sugar.  It was too stiff and not good for my cheap beaters.  It probably would have worked better if I hadn't dumped all the sugar on the aquafaba at once but it was so stiff it was like modelling clay.

On the Stereo:
Dr. Demento Presents the Greatest Novelty Records of All Time, Volume VI: Christmas
Posted by Johanna GGG at 22:54