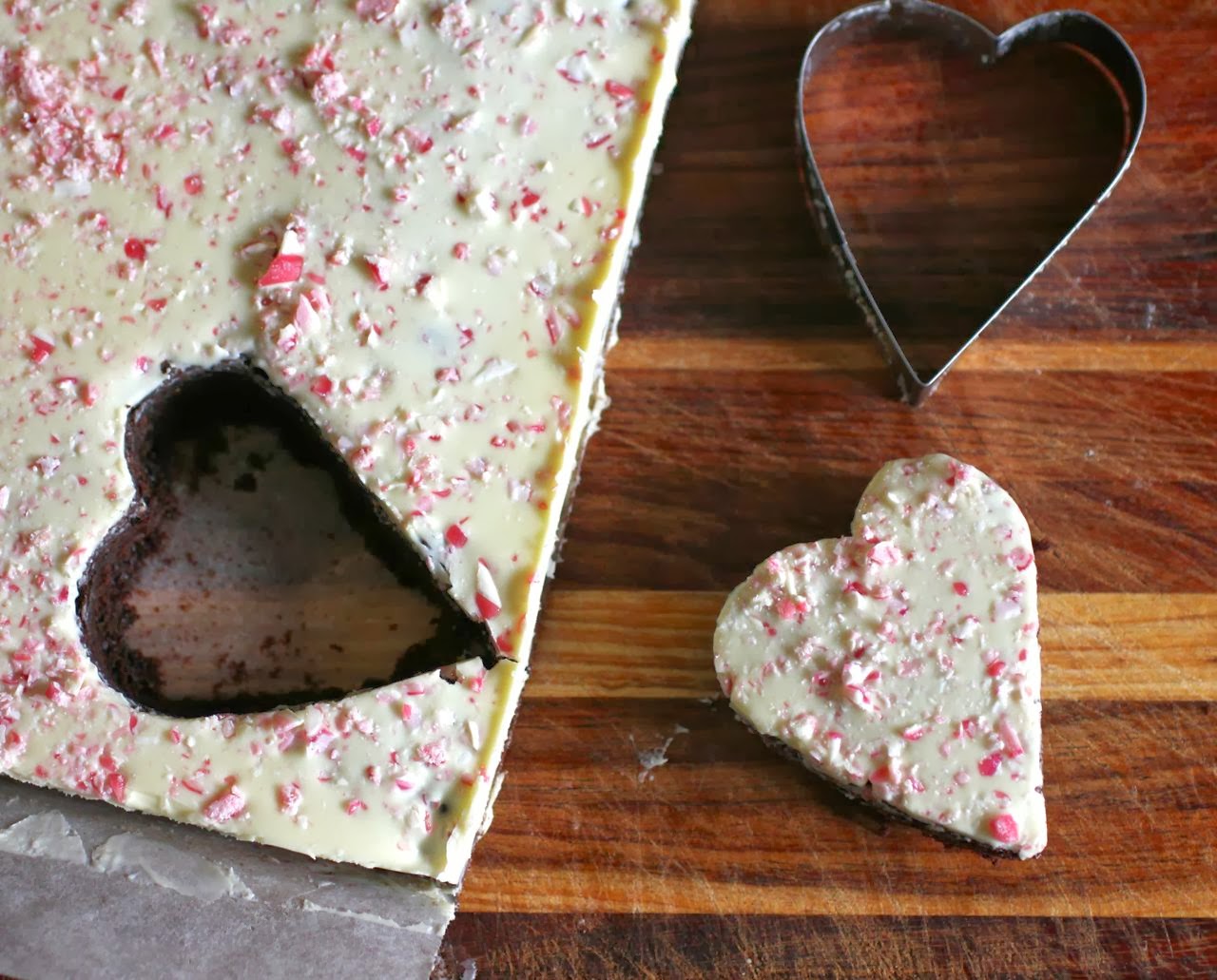 Valentine Day came and went with good intentions, but little time and energy for fun food.  But don't we always say that Valentines Day is not the only chance in the year for love, hearts and fun.  So a few days later I finally found time to make a recipe I had my eye on.  It was a dense brownie with a white peppermint bark on top.  I might have been late for Valentines Day but not quite as late as I have been to use up the candy canes from Christmas. 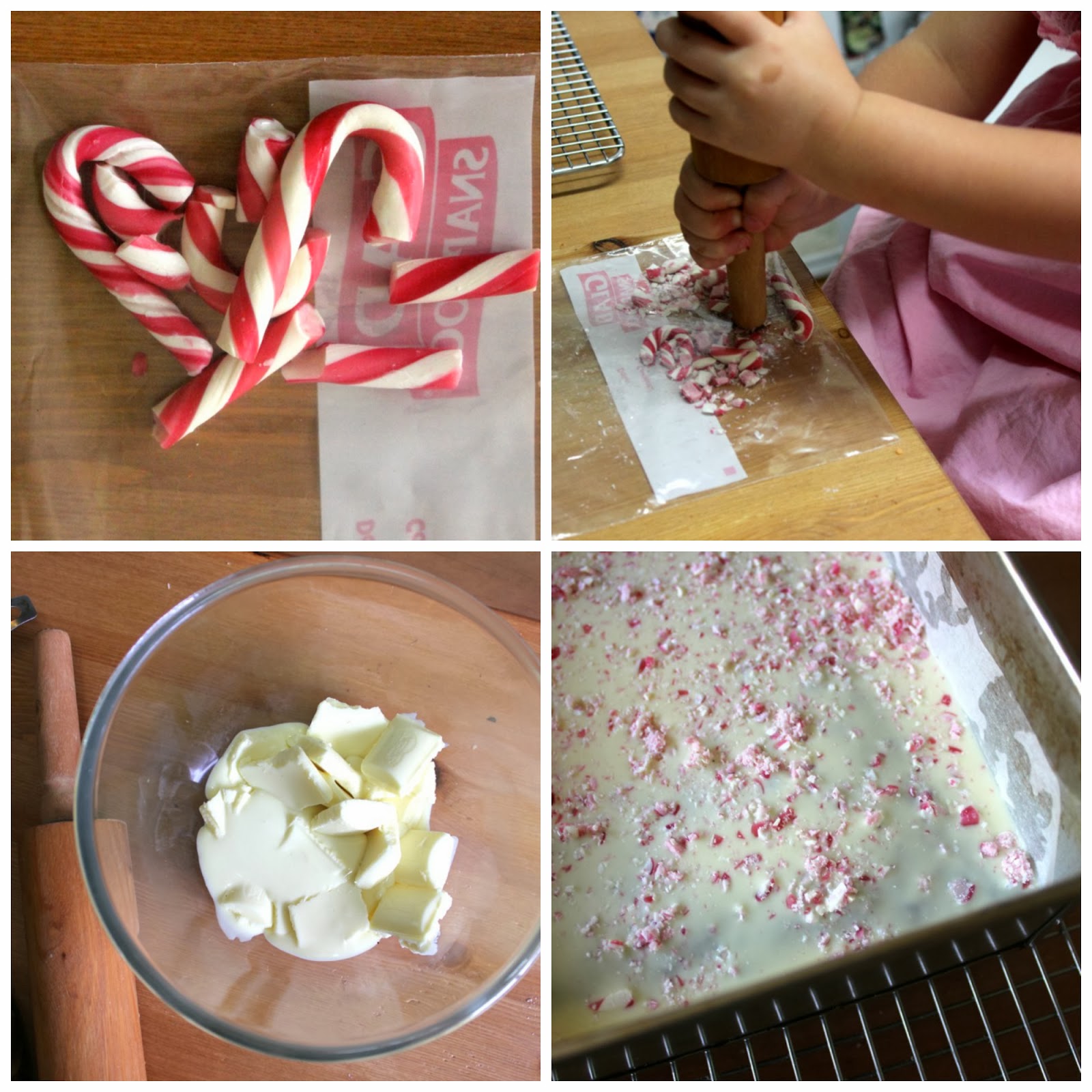 Crushing candy canes is something I have never done before.  I will always remember my first time.  Bashing the candy canes in a zip lock bag with a rolling pin was fun but left its mark.  I hadn't thought about just how sharp the shards are and did this on our wooden table.  It still bears the pock marks.  Next time I will crush candy canes on an old chopping board or something harder. 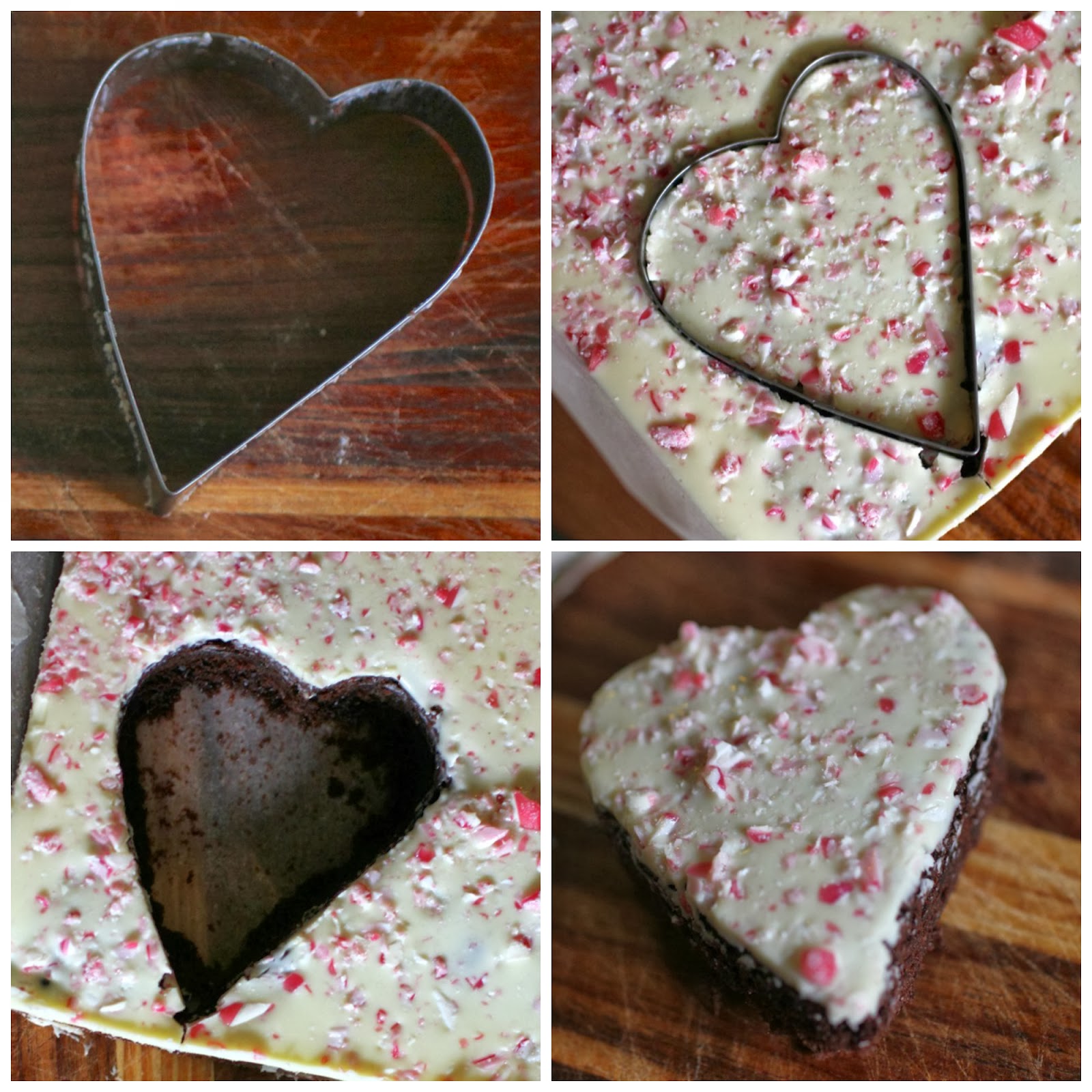 I had seen some peppermint bark brownies on La Casa de Sweets.  They looked gorgeous (and were quite a healthy brownie recipe).  I had visions of cutting them into heart shapes.  However I wasn't so sure of the vegan grain-free version, especially as it had almond flour and I had a notion that I could put one into Sylvia's lunchbox (which must be nut free).  I quite liked the leftover candy cane brownies that I saw at The Creekside Cook.  It was an easy simple recipe, that used pantry staples. 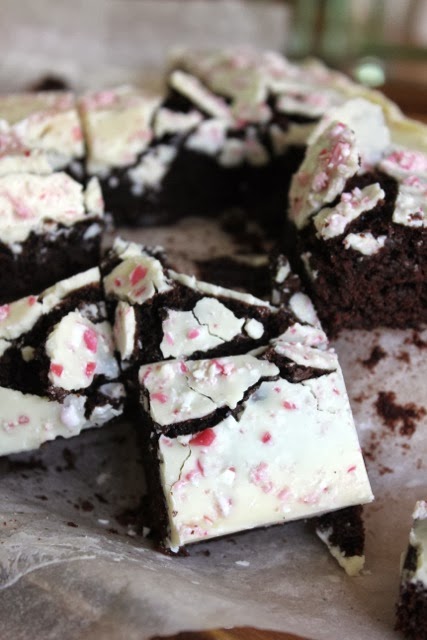 I cut my brownie hearts as soon as the white chocolate had set hard enough to cut - perhaps 2 to 3 hours (I think I put them in the fridge because I was impatient to have them ready before Sylvia went to bed).  I was glad I did.  The next day when I tried to cut them, this is how they looked. 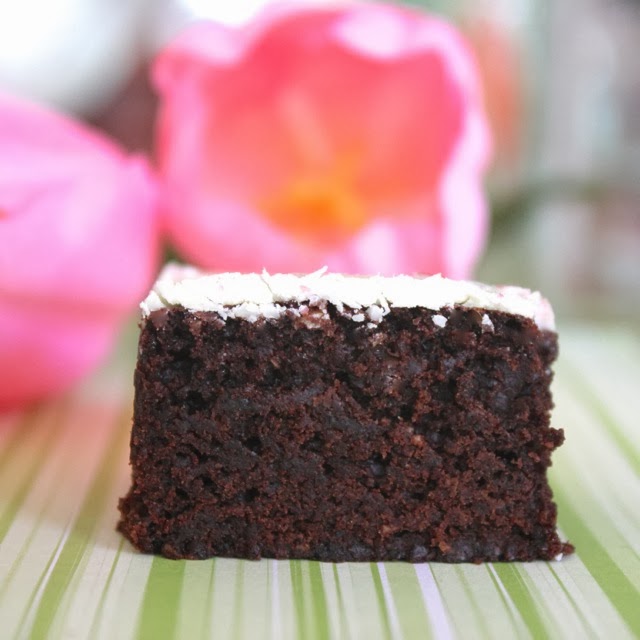 However, while the white chocolate peppermint bark crumbled at the touch of a knife, the brownie was fudgy and rich.  Together they made a pleasing combination of soft and yielding, the shatter of hard chocolate and the crunch of candy cane shards.

The mint flavour worked really well for me here, softening the tooth-aching sweetness of the white chocolate.  After all I grew up eating peppermint crisp - a bar of crunchy peppermint in a milk chocolate coating.  My mint candy canes only made up about half the required amount.  It seemed enough though I would try more if I had them.  I decided to stick to the red and white candy canes for the Valentine aesthetics. 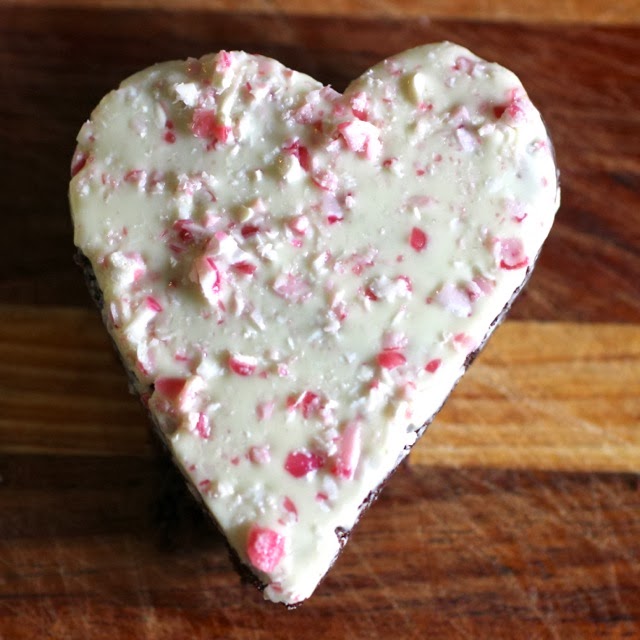 In fact it was so delicious that I was surprised when E said he wasn't so keen on it.  He isn't really into the mint flavour nor the crunchy candy canes.  Hurrumph!  The proof, however, is in the eating.  And I did find that he was rather fond of eating it, despite his proclamations.  Sylvia also loved the slice.  She ate it by taking off the white chocolate topping and eating it first. 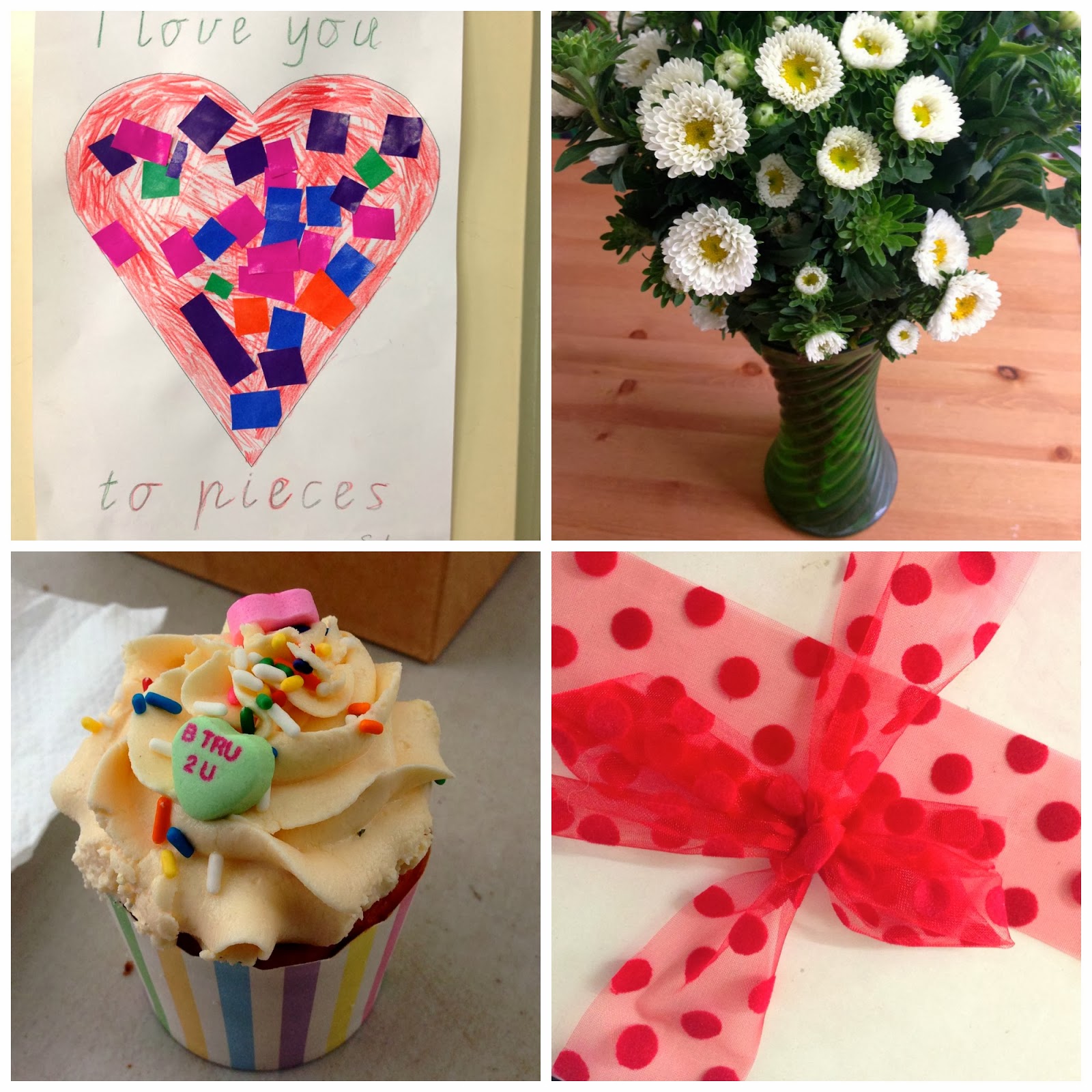 We did have some other hearts and flowers on and around Valentines Day.  Here is a little taster.  Meanwhile we have more candy canes left in different colours and flavours.  Perhaps it calls for more brownies!

I am sending this to Elizabeth's Kitchen Diary for her Valentines Day Baking Inspiration event.

Topping:
150g white chocolate
1/4 cup crushed candy canes (I think I only had about 2 tbsp)

Preheat oven to 180 C and grease and line a 20cm square cake tin.

Melt butter in a medium bowl (in the microwave) or saucepan (on stovetop).  Add sugar and cocoa, add in eggs, one at a time and then vinegar.   Gently mix in flour, baking powder and salt.  Pour into prepared tin.  Bake for 20 minutes until a skewer inserted in the middle comes out just clean (a few crumbs are fine).  Cool in the tin.

To make topping, melt white chocolate and pour over cooled brownie in the tin.  Sprinkle with crushed candy cane.  Let chocolate set before removing from tin and slicing.  It is best to slice when chocolate has just set - I think this was a few hours rather than letting it harden completely when it is more likely to crack.  Keep in an airtight container - ours kept for 4 days and was still good.

On the Stereo:
Picaresque: The Decembrists
Posted by Johanna GGG at 22:48