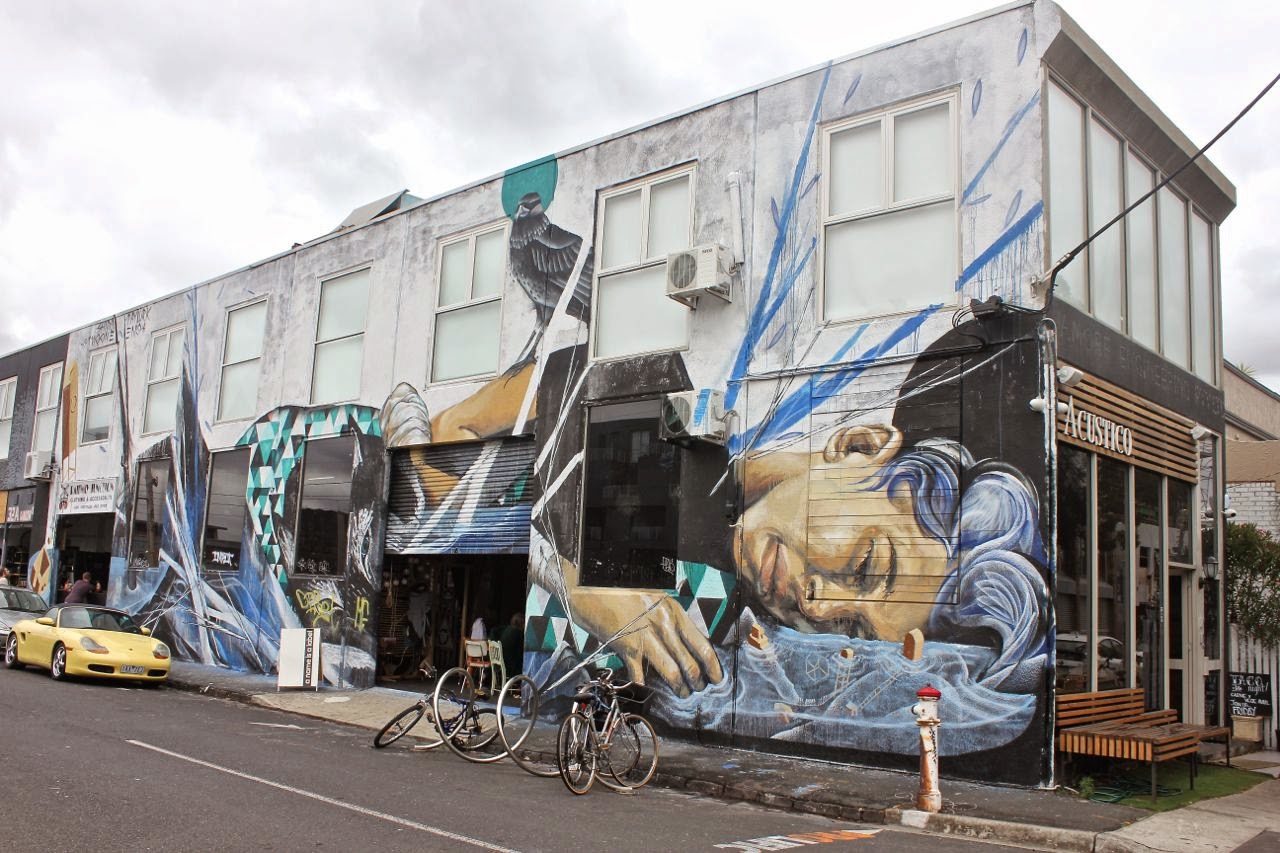 This morning E played ukelele with his group at the pop up park on the corner of Wilson Avenue and Sydney Road (the Brunswick Better Block Trial being run by Moreland City Council).  It was great fun and I finally had an opportunity to photograph this amazing piece of street art by Jewel train station.  Which reminded me we should try out Acustico cafe while in the area.  We did and enjoyed it muchly. 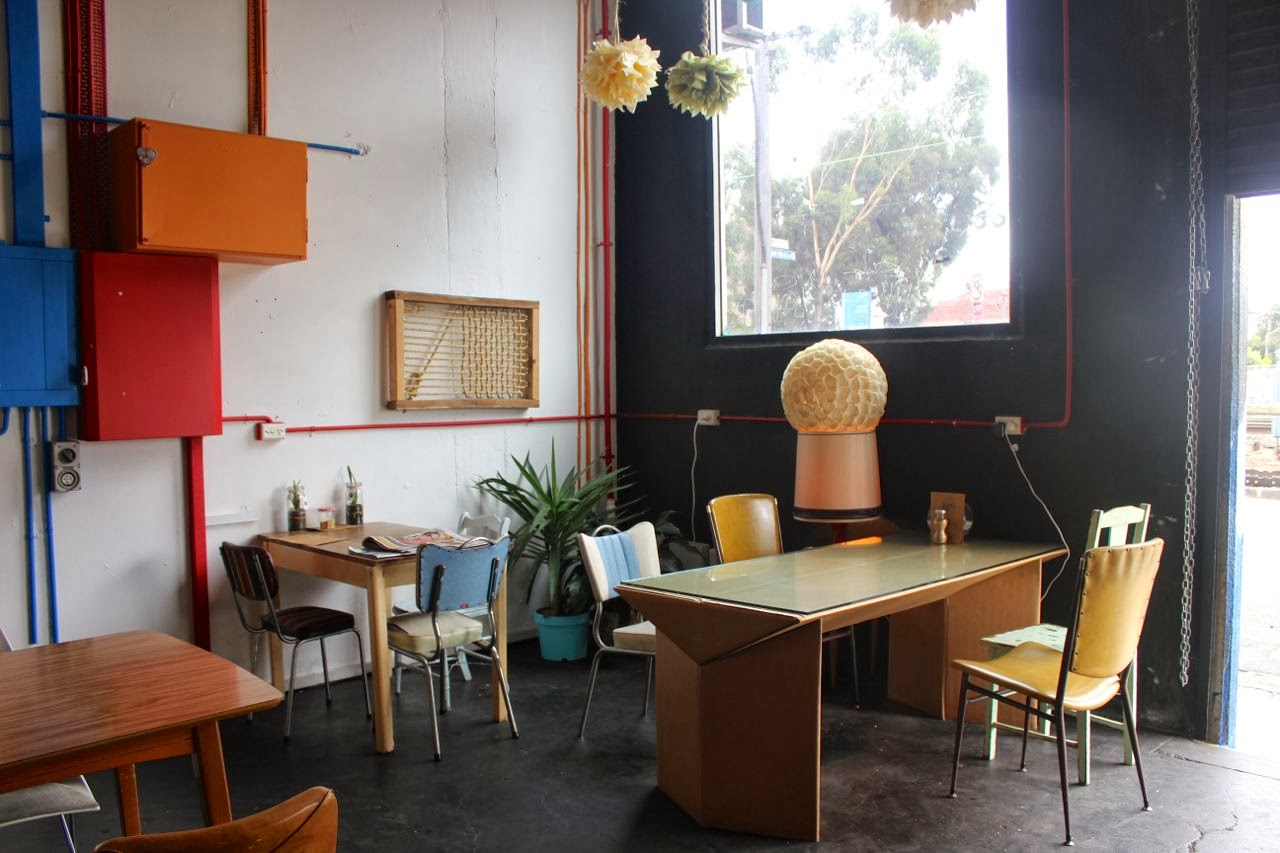 I have often passed by this cafe on the train thinking I should visit ever since it opened two and a half years ago.  It was a happy moment to walk in and find it was every bit as interesting as it looked from the train window.  Mismatched old furniture, leafy plants, light shade made out of cupcake papers, an old piano, jam jars of sugar.  A done with a good eye for design and a good heart for the environment. 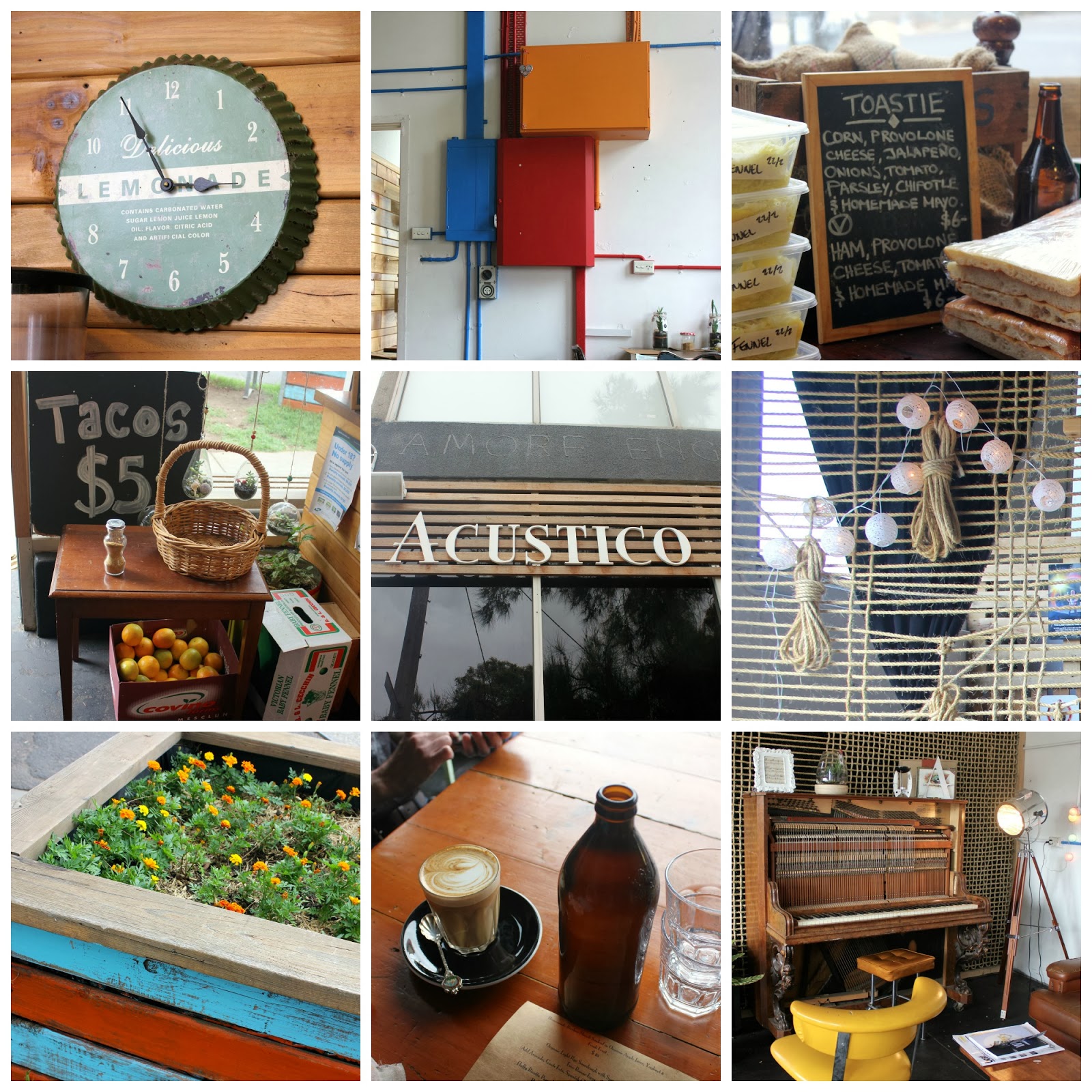 I placed our order and asked about where to find water.  It amused me that he said the water was by the television.  I really dislike a place with a brightly lit television but this one was an old repurposed television that was now the drinks table.  It fitted right in with the retro loungeroom vibe of the old sofa and piano. 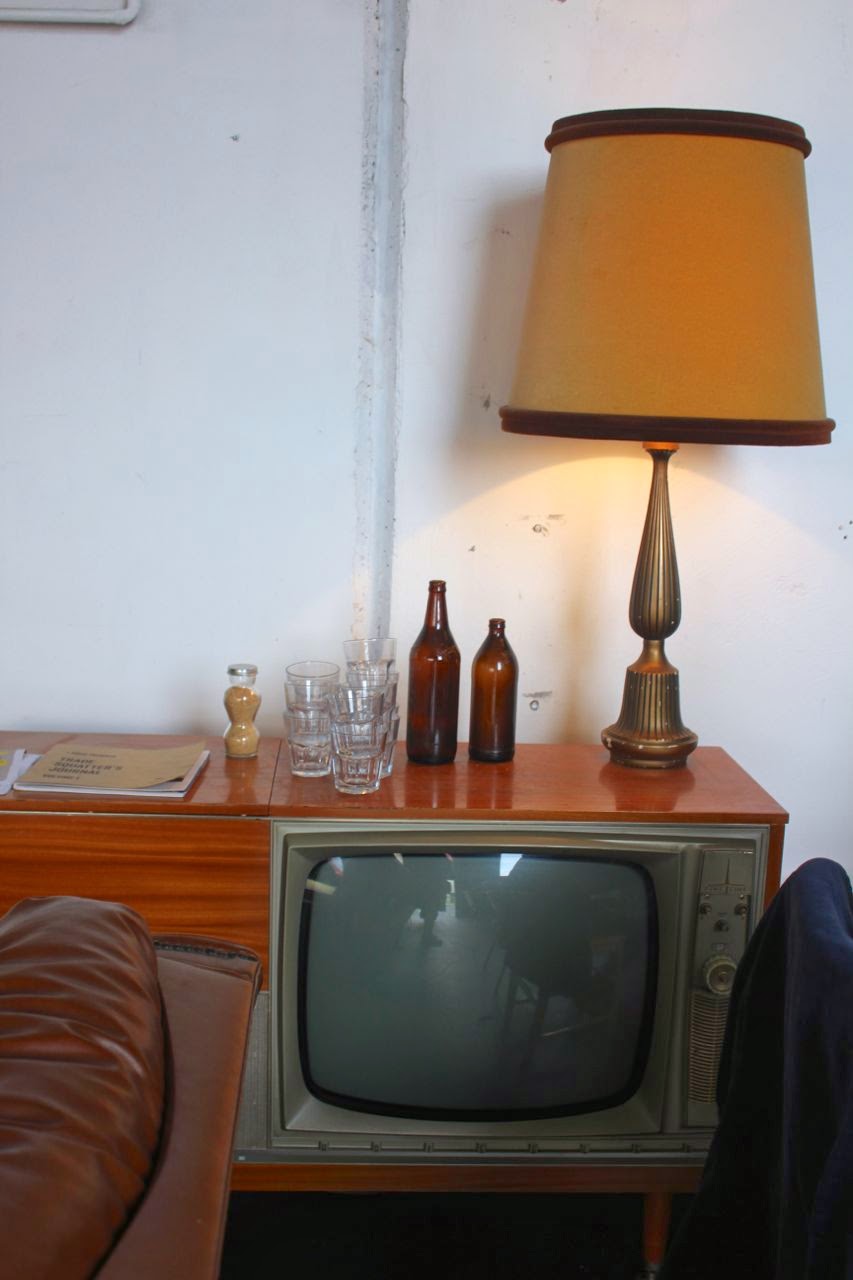 When we arrived I also noticed that through the below doorway was a little cubby hole away from the main dining area.  It was occupied at the time. 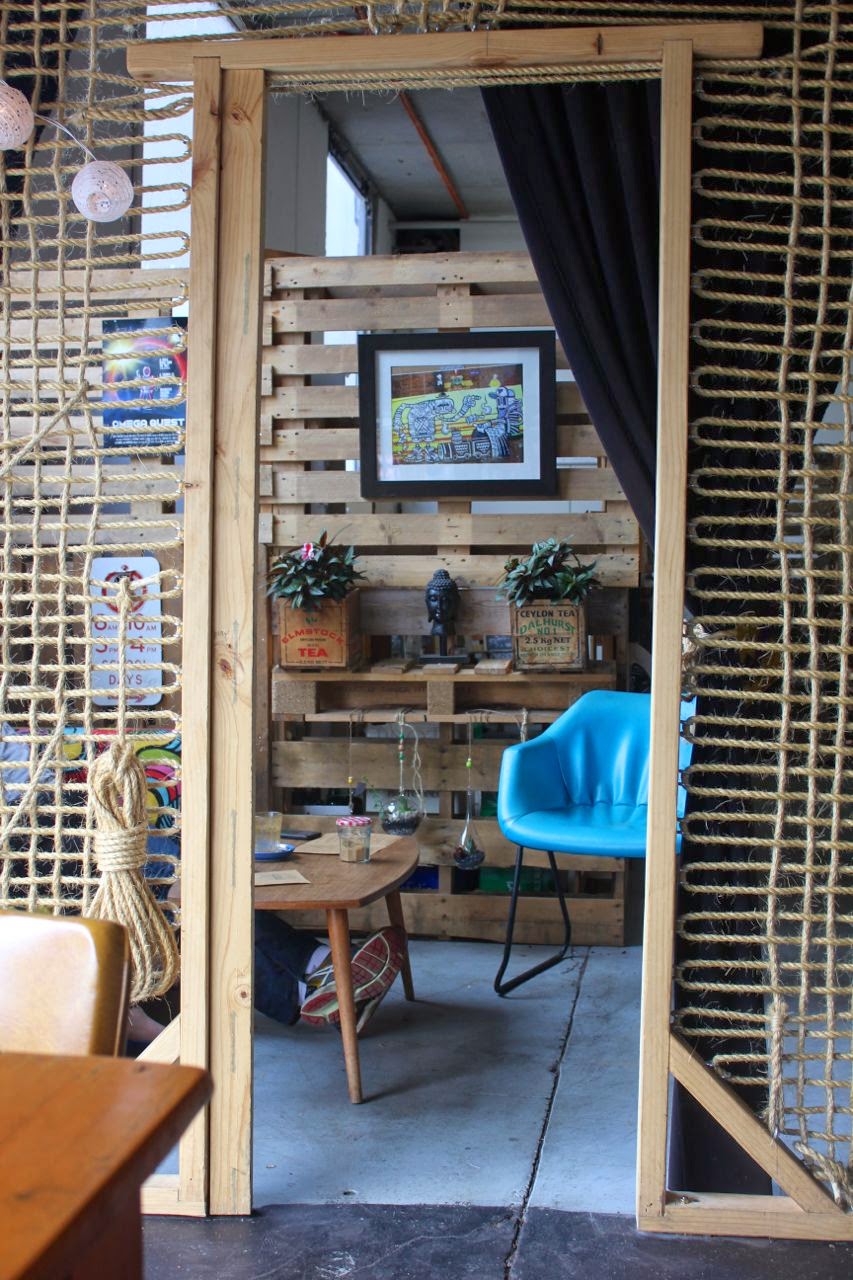 Later on when the people left Sylvia and I went in to explore.  It is not quite as secluded as it looked because you pass through this door to go to the toilets.  But it is such a cute little space with the old parking sign, plants and buddah. 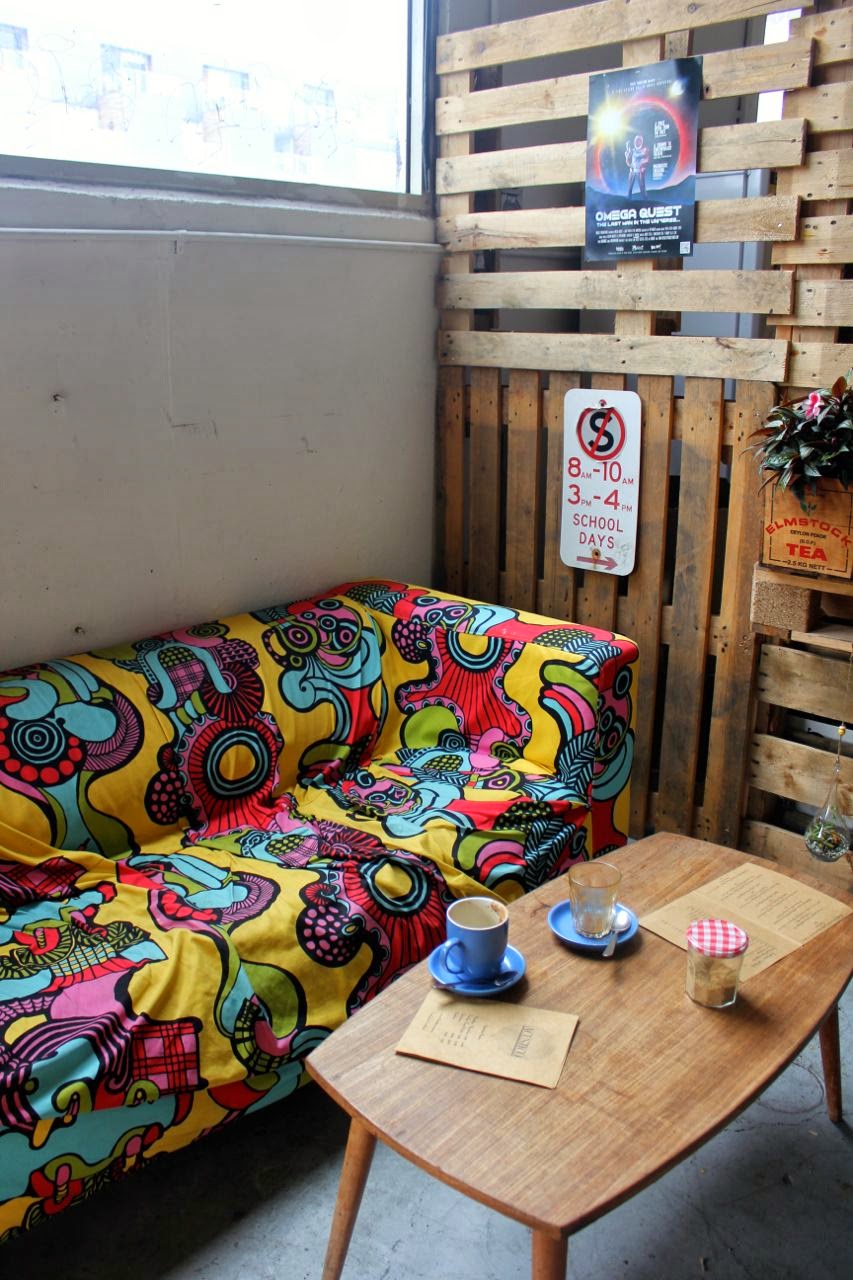 Meanwhile, when we first arrived, all tables were occupied so we sat at the end of the large one by the "doorway".  It was actually a large garage door that gave the room a spacious feeling and a great view of the railway line for trainspotters. 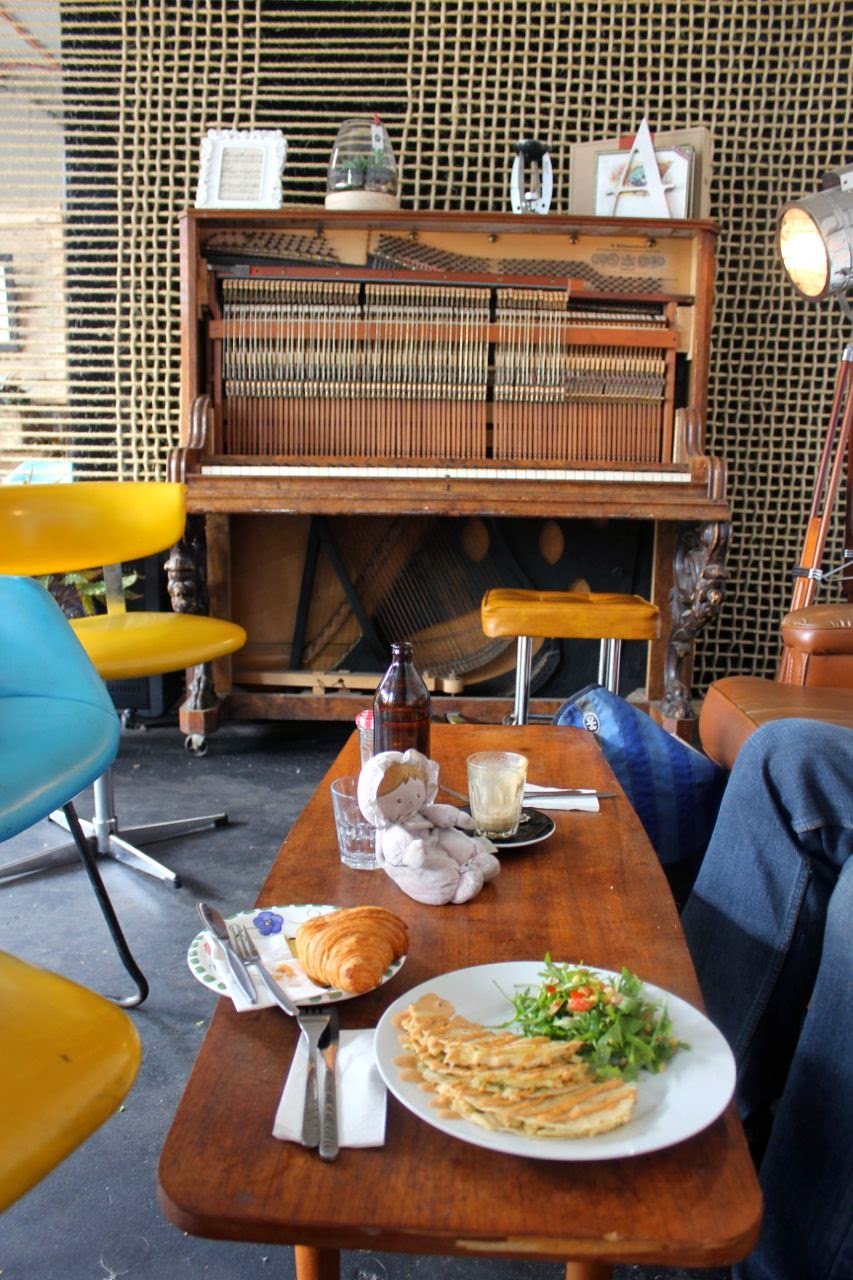 Then the sofa was vacated and Sylvia was aching to sit there so we moved.  It meant I had to eat my lunch on my lap but it also meant that when I felt very full at the end I could sink back into the sofa and feel like I might never get up. 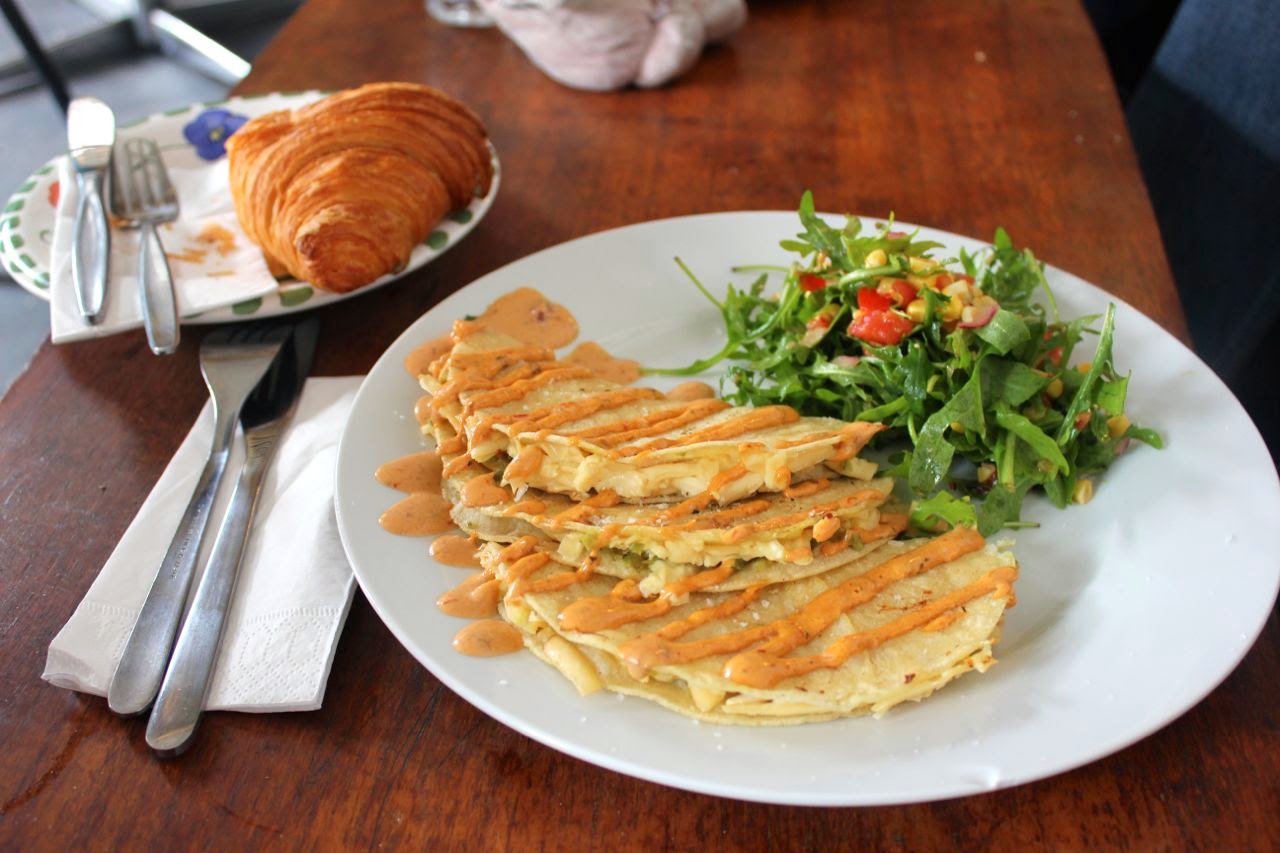 For lunch I ordered a quesadilla filled with smoked cheese and jalapeno with tomato, onion and corn salad ($15).  The menu has quite a lot of Mexican food on it.  So it should have been no surprise it was rather spicy.  My mouth burnt after it.  Yet I am sucker for a smoky flavoured meal.  And I did enjoy it.  The corn tortillas were light and just crisp.  The cheese would have been too heavy without the salad on the side.  I didn't manage to finish it but E helped out.  Later we were told this plate was meant for sharing. 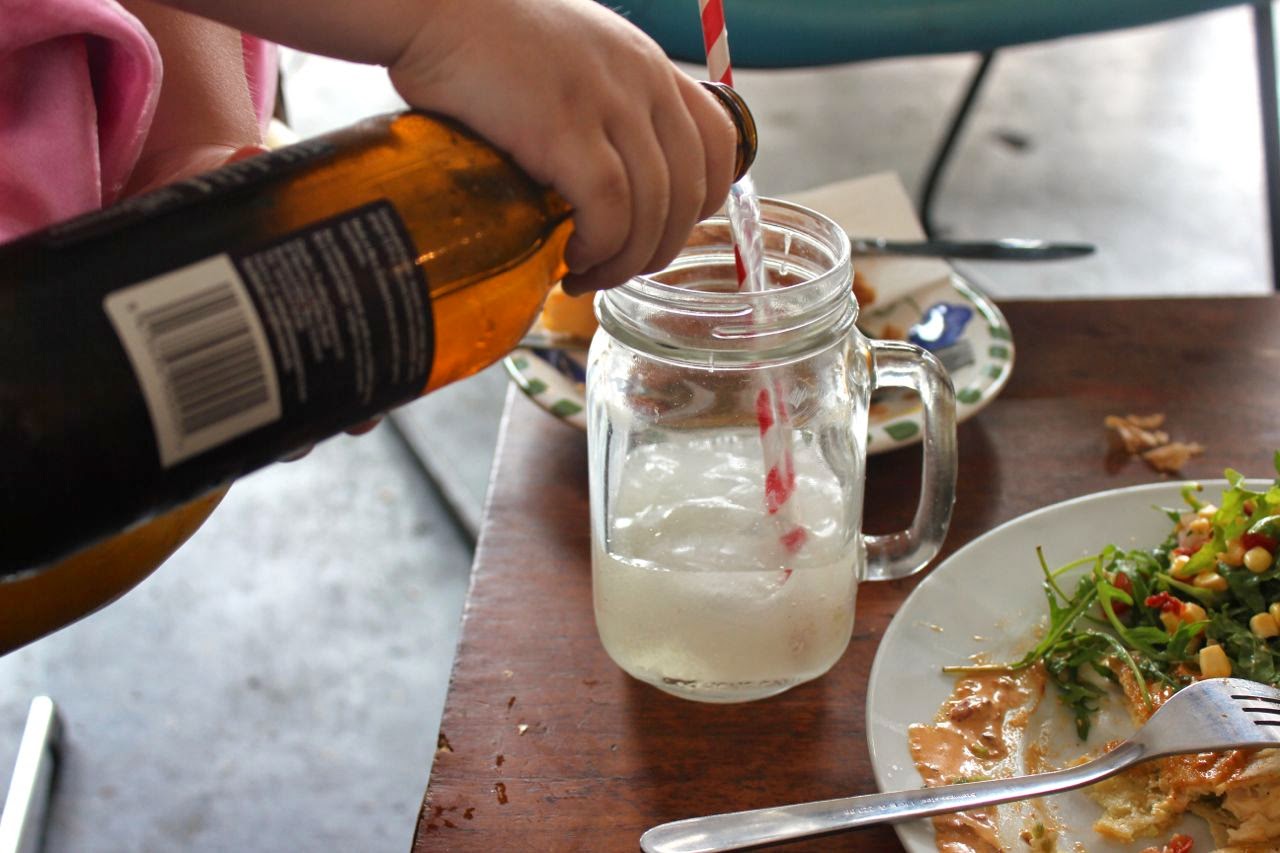 Sylvia had a croissant and a ginger beer.  The croissant was very flaky and gobbled up.  The ginger beer was the Phoenix brand which we love.  It came with a very hip glass jar with handle.  Sylvia preferred drinking out of the bottle.  There were some croissant crumbs which met some ginger beer when I wasn't looking. 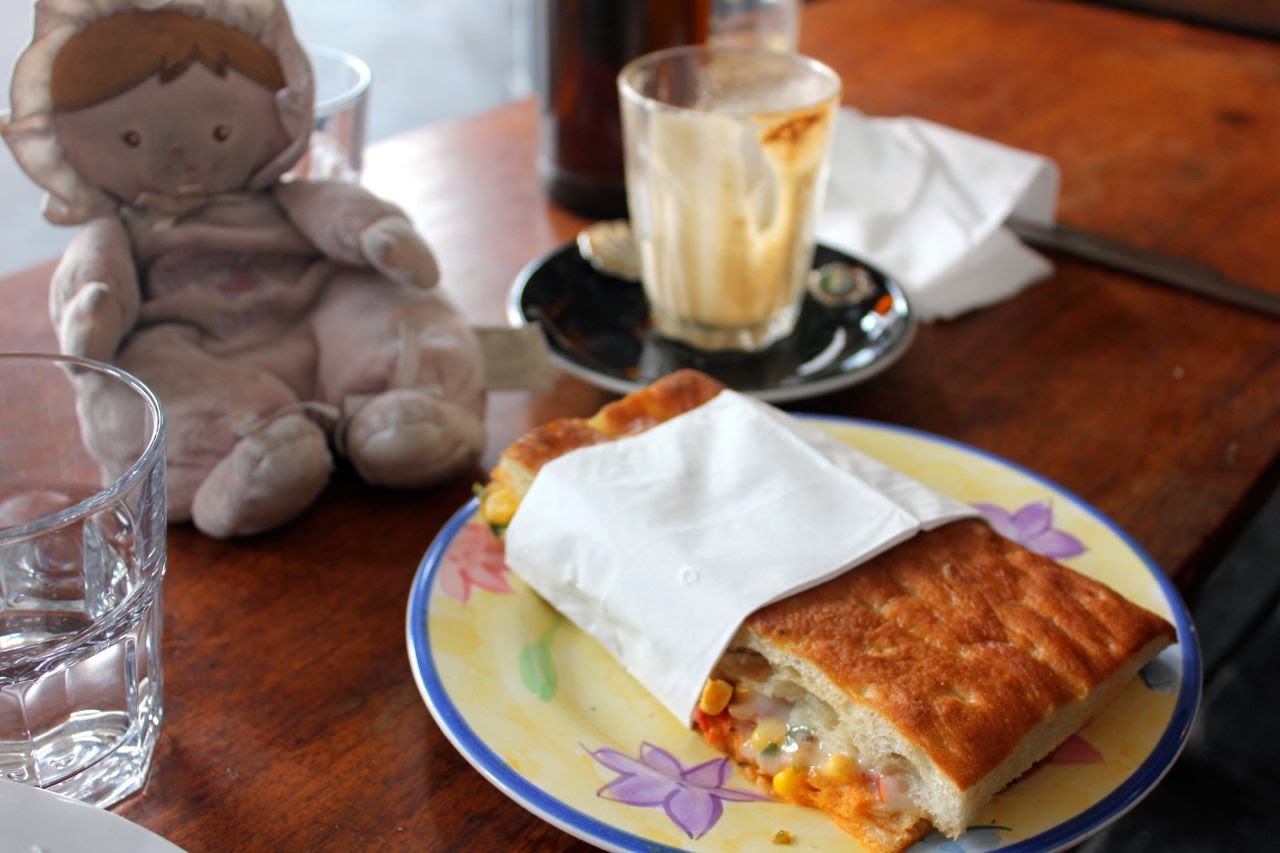 E had a Toastie with corn, provolone cheese, jalaleno, onions, tomato, parsley, chipotle, and home made mayo ($6).  He was most impressed with it.  A cut above the average toastie.  Though apparently not as spicy as my quesadilla - I tasted it but had eaten too much spicy quesadilla to judge the toastie.  I think it was good because it wasn't full of chunky pieces of vegies falling out on your lap.  But E says it was the nice bread and nice filling.  He also enjoyed his soy latte. 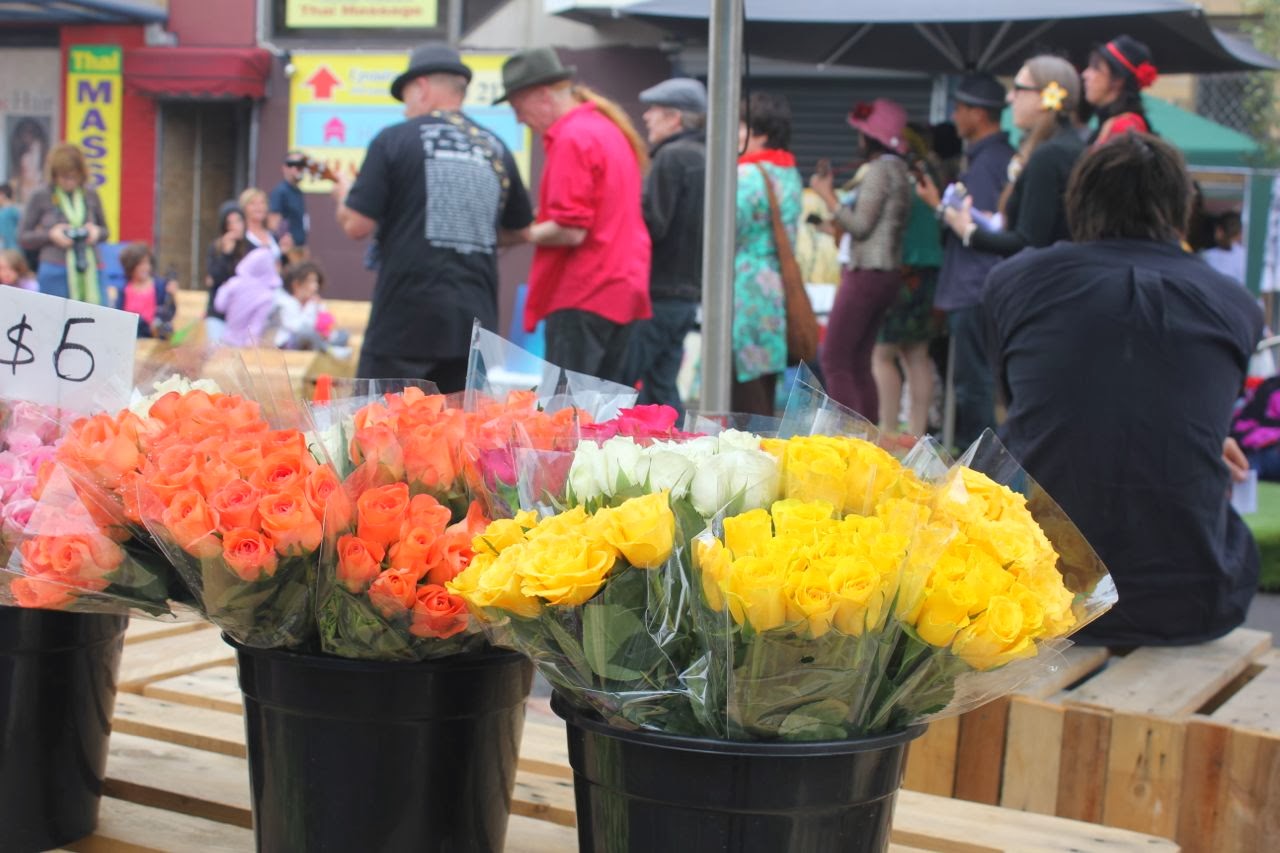 And because we enjoyed our visit to the pop up park before the lunch, I thought I would share a few photos. 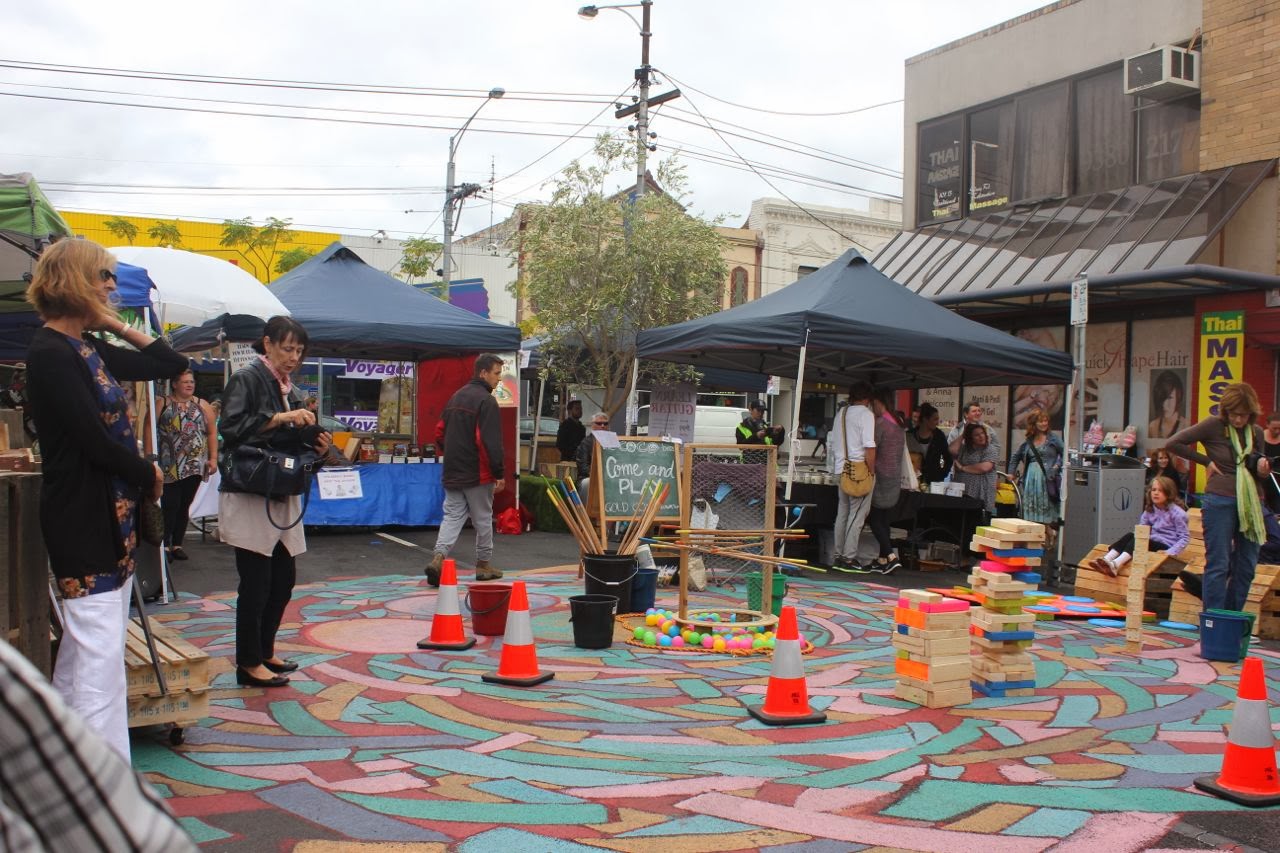 The park had a pizza oven, some quality craft stalls and a fantastic play area in the middle of it.  The games included giant wooden noughts and crosses, blocks, dice and tug of war.  They were run by The Coco Bros who hire these out for parties.  I love the idea. 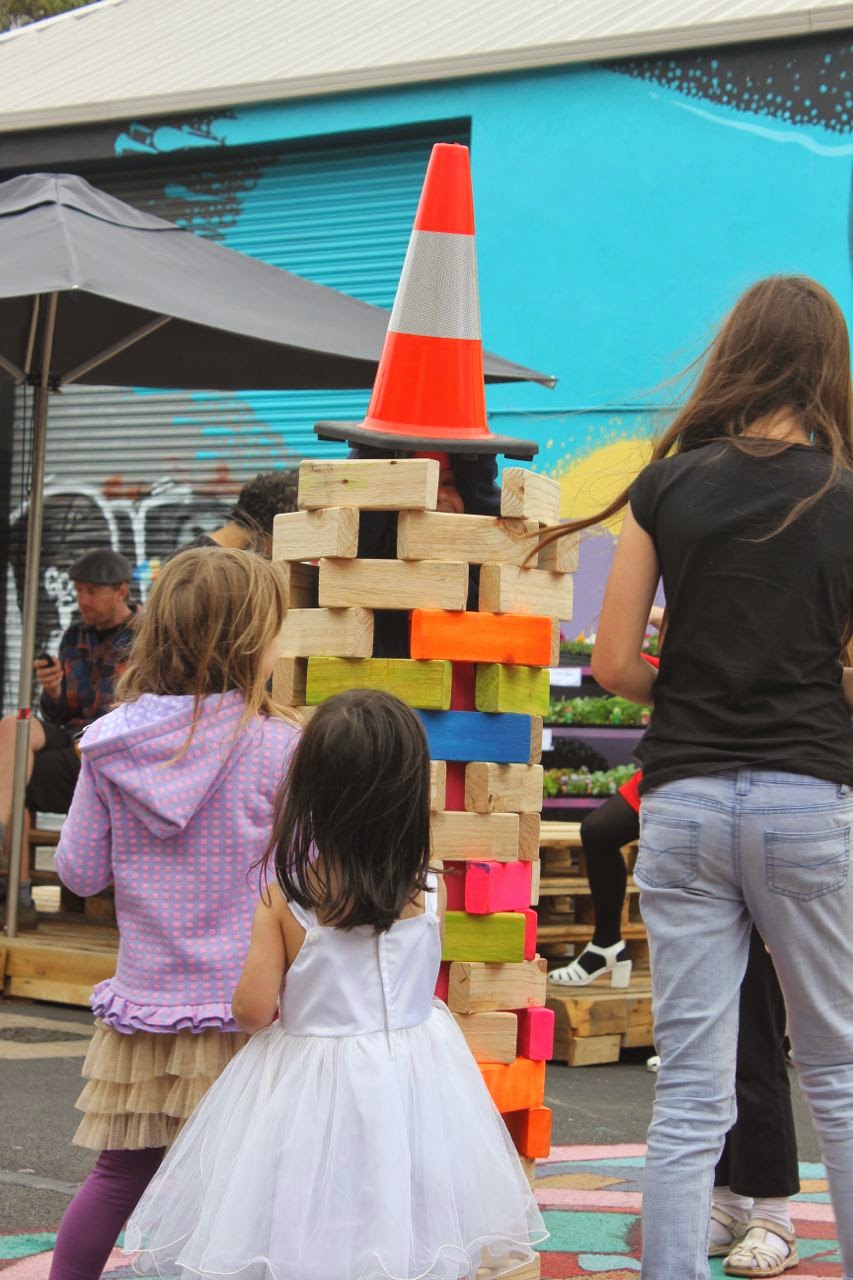 These kids also loved the games.  Their favourite was to stack the blocks around one of their friends who would then burst out.  It was great fun to watch. 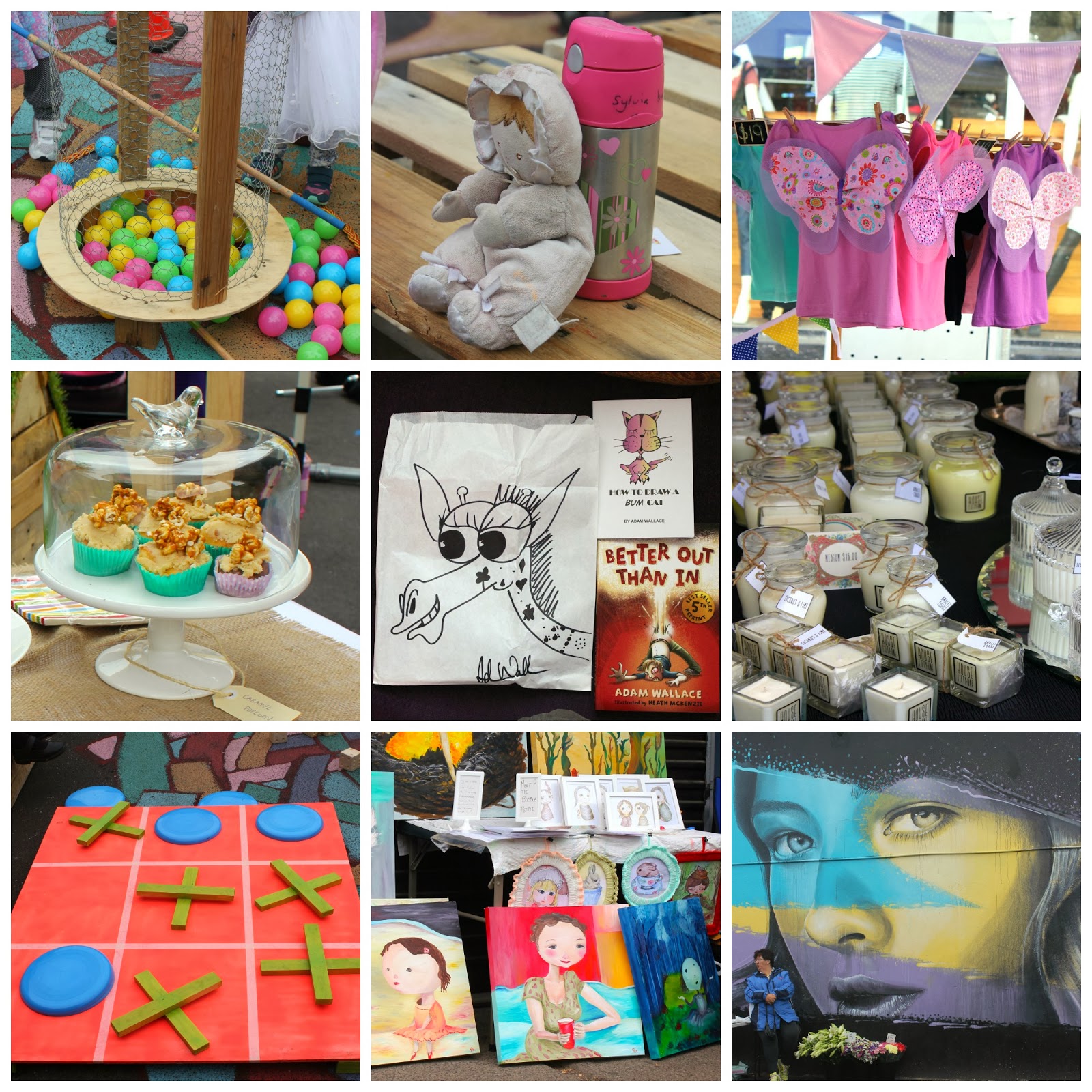