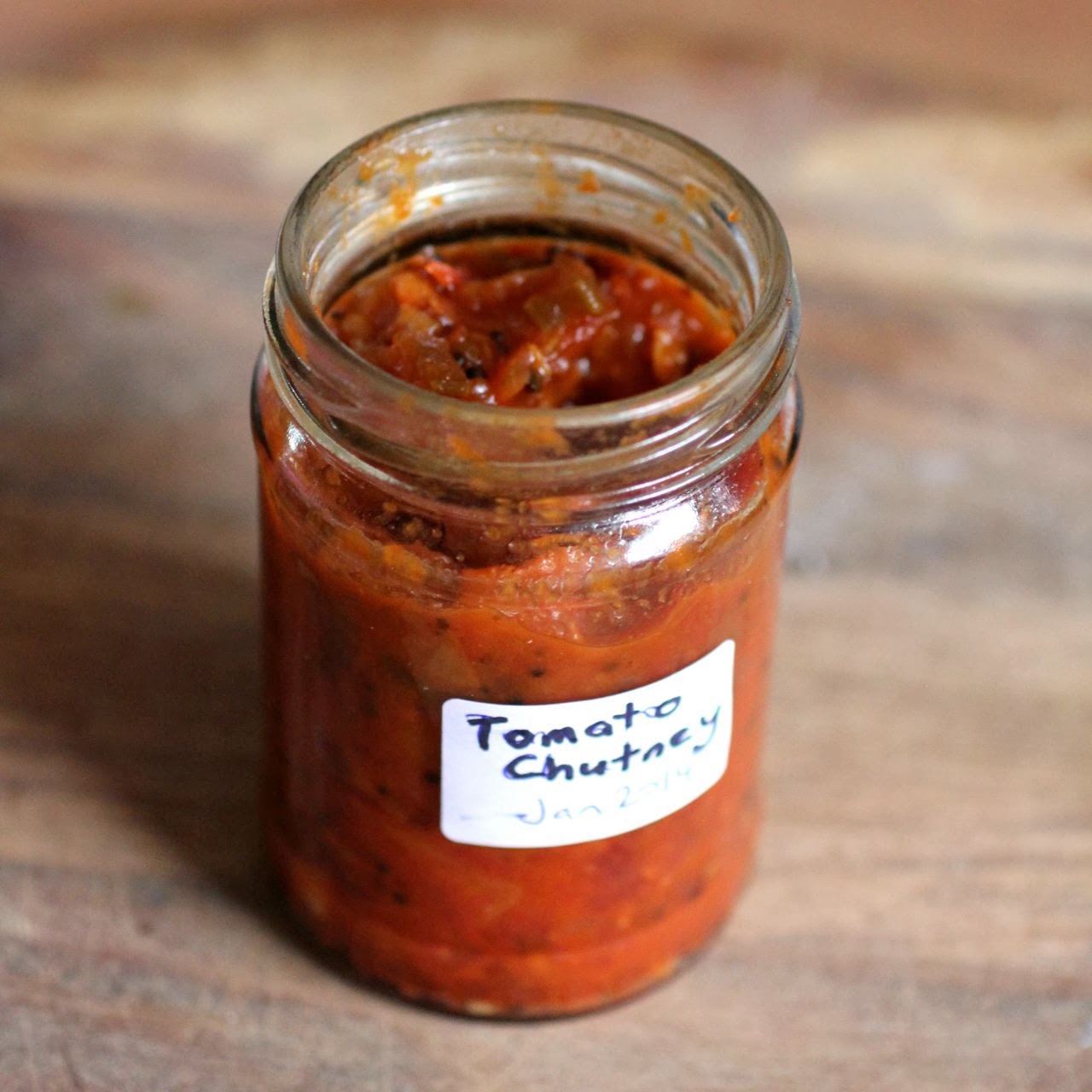 Chutney and preserves are frustrating recipes to blog about.  I wanted to write all about this when I made it but yet I thought I should wait until I had used it a bit and could tell you about how it was going.  Then by the time I am writing about it, my memories of making it are no longer crystal clear. My last chutney was not great and was neglected.  The chutney I bring you today is delicious and we are zooming through it. 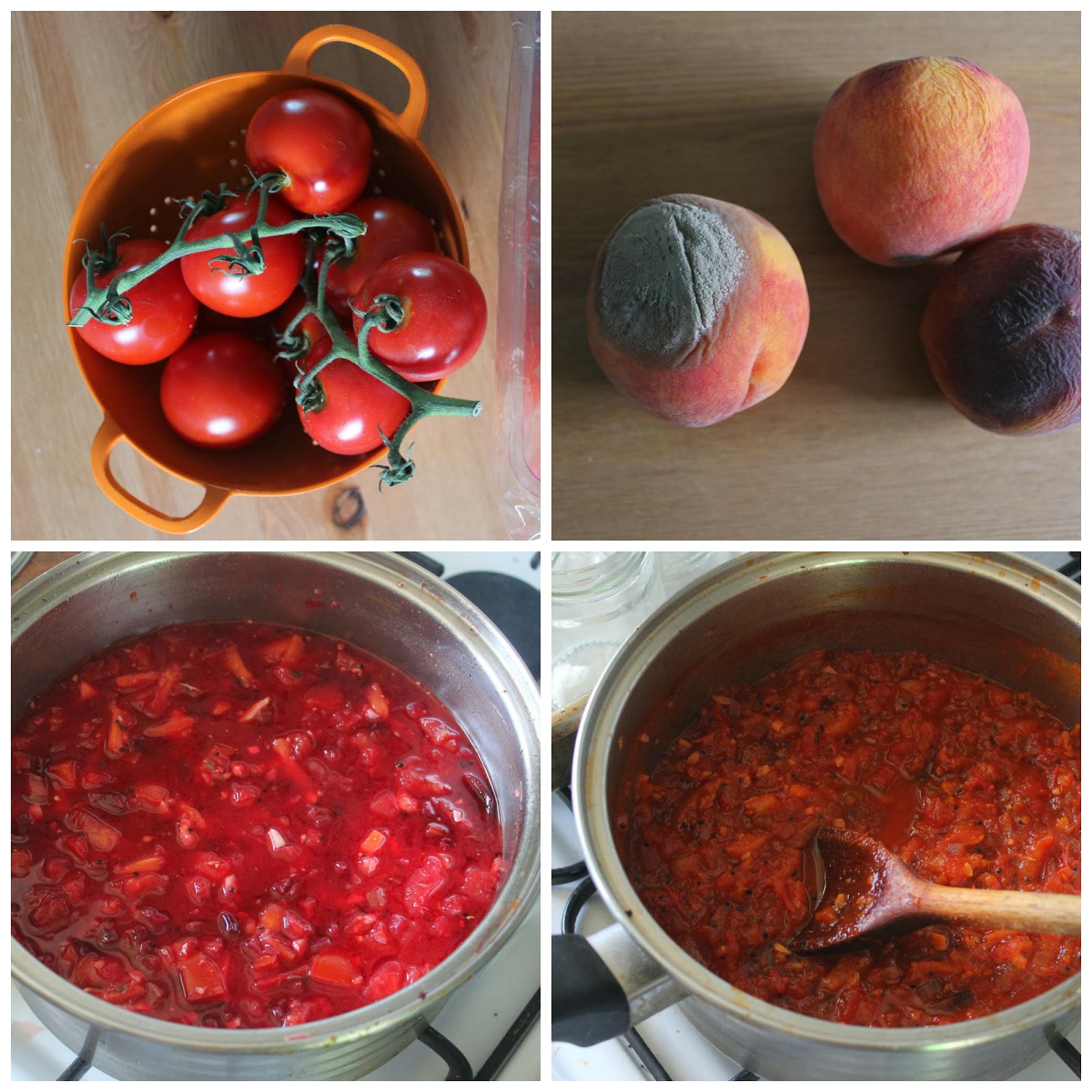 I first decided to make some chutney when I was gifted some peaches by my brother in law from his tree.  Then they were used for breakfast with yoghurt.  I then bought some cheap with good intentions but as you can see, they got a bit manky and I had to cut out some mould.  I also had some tomatoes I had bought on special that needed using. 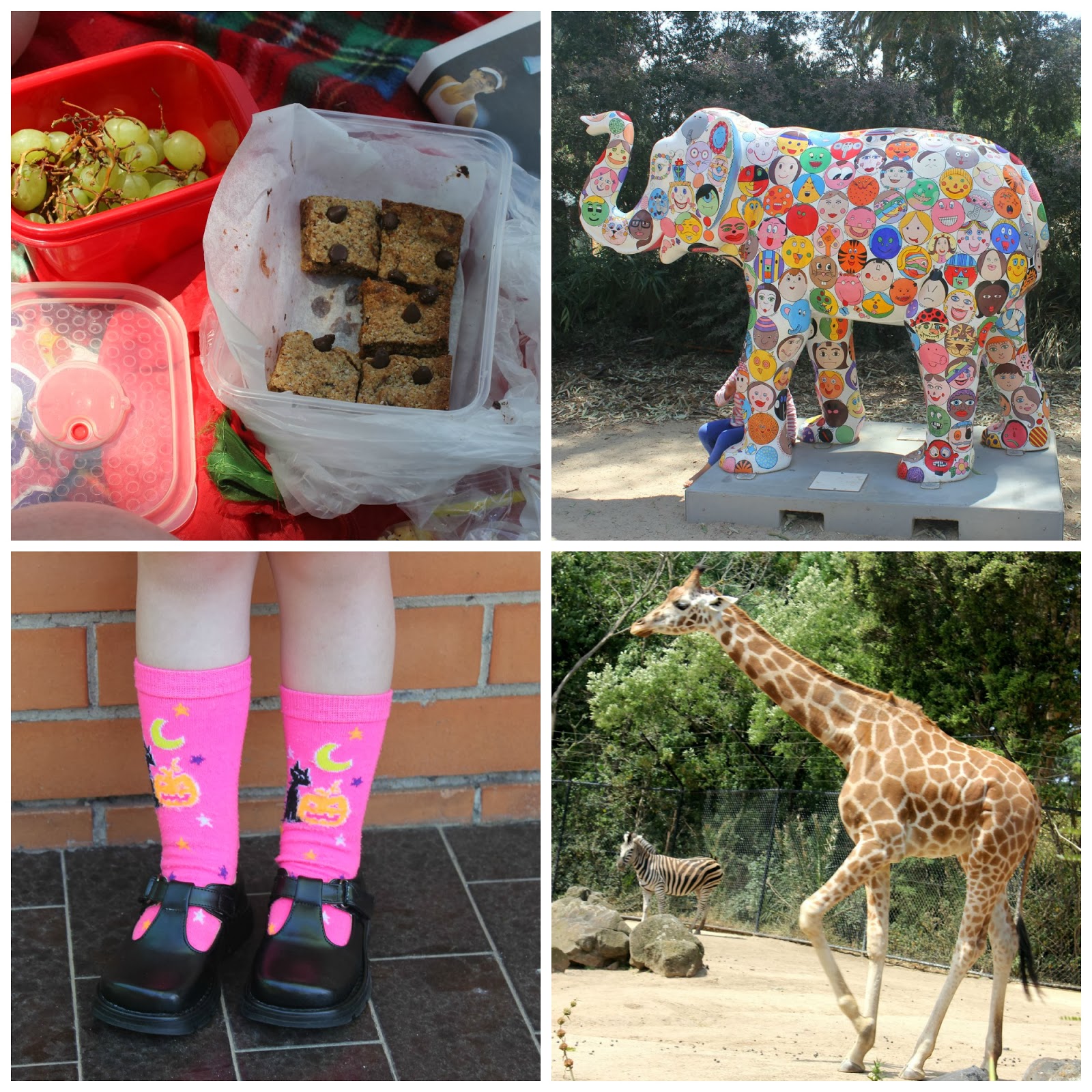 I fried the spices and vegies and added all my ingredients before running out of time.  I had been to the zoo with a kinder friend of Sylvia's the previous day and got home with no keys.  My neighbour very kindly had us in while she made dinner for her friends.  The day of the chutney I rang the zoo and was relieved to hear that someone had handed them in.  I left the chutney ready for simmering while I picked up the keys and stopped on the way home to buy new school shoes for Sylvia. 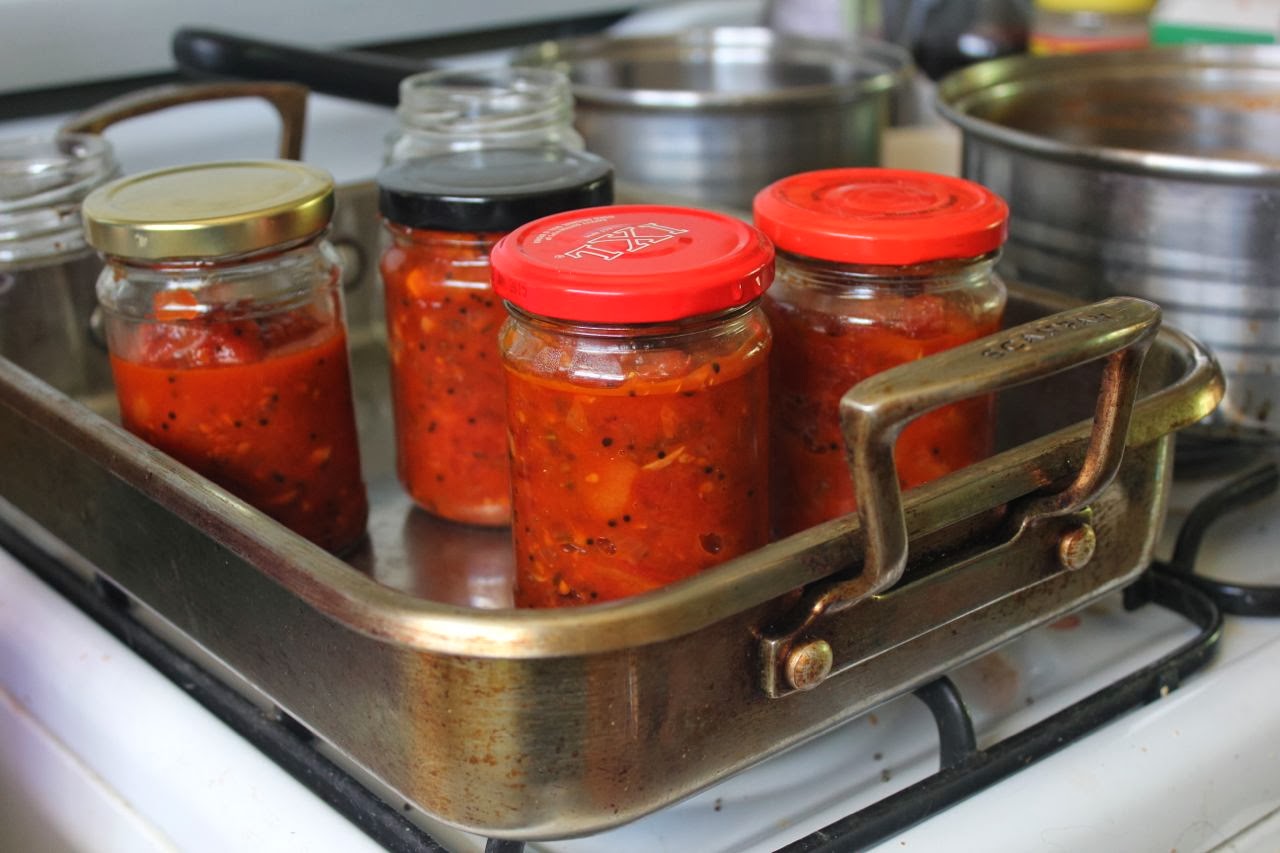 When I got home I simmered the chutney, chatted on the phone, sterilised the jars and did some craft with Sylvia.  Eventually the chutney was in the jars.  With hindsight it seems easy.  Enough time has passed that I can't remember it clearly and Sylvia shoes are starting to look a bit scuffed and in need of a clean.  Though I am getting more used to preparing jars for chutneys and jams, which make life so much easier. 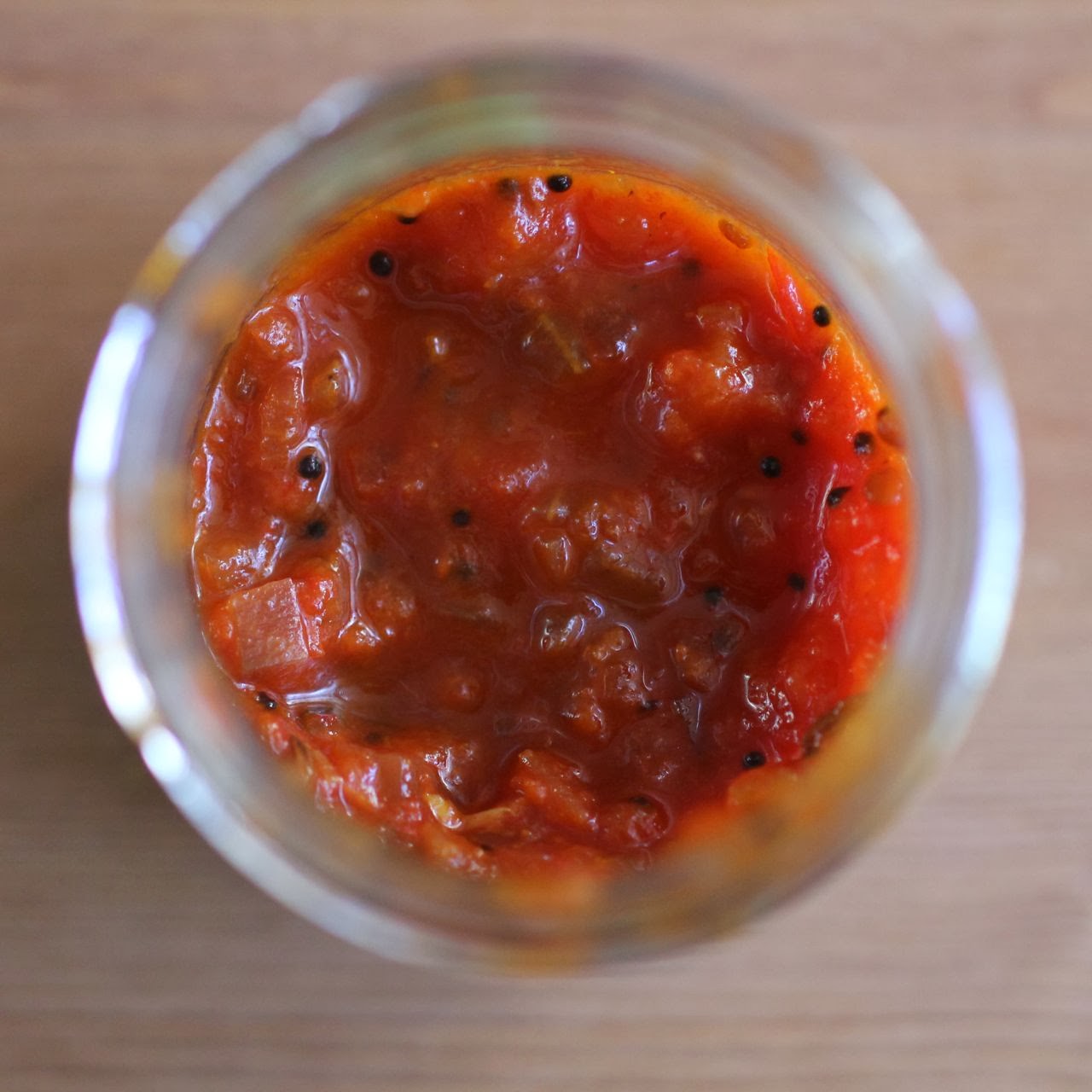 While I initially intended to make tomato and peach chutney, the amount of peaches was reduced by mould and I had a few other vegies that needed using.  I was going to just use mustard and fennel seeds but curry powder seemed right.  Not too much.  I did vaguely follow a recipe which used more salt and sugar than I usually do.  I only realised this after adding the salt but before adding sugar.  So I reduced the sugar and found it quite tasty rather than a bit sweet.  This actually worked well.

I can tell you that the chutney is brilliant.  Perfect for sausages, burgers, sandwiches etc.  I left it a little chunky rather than blending it.  It looks great with the little black specks of mustard seeds. 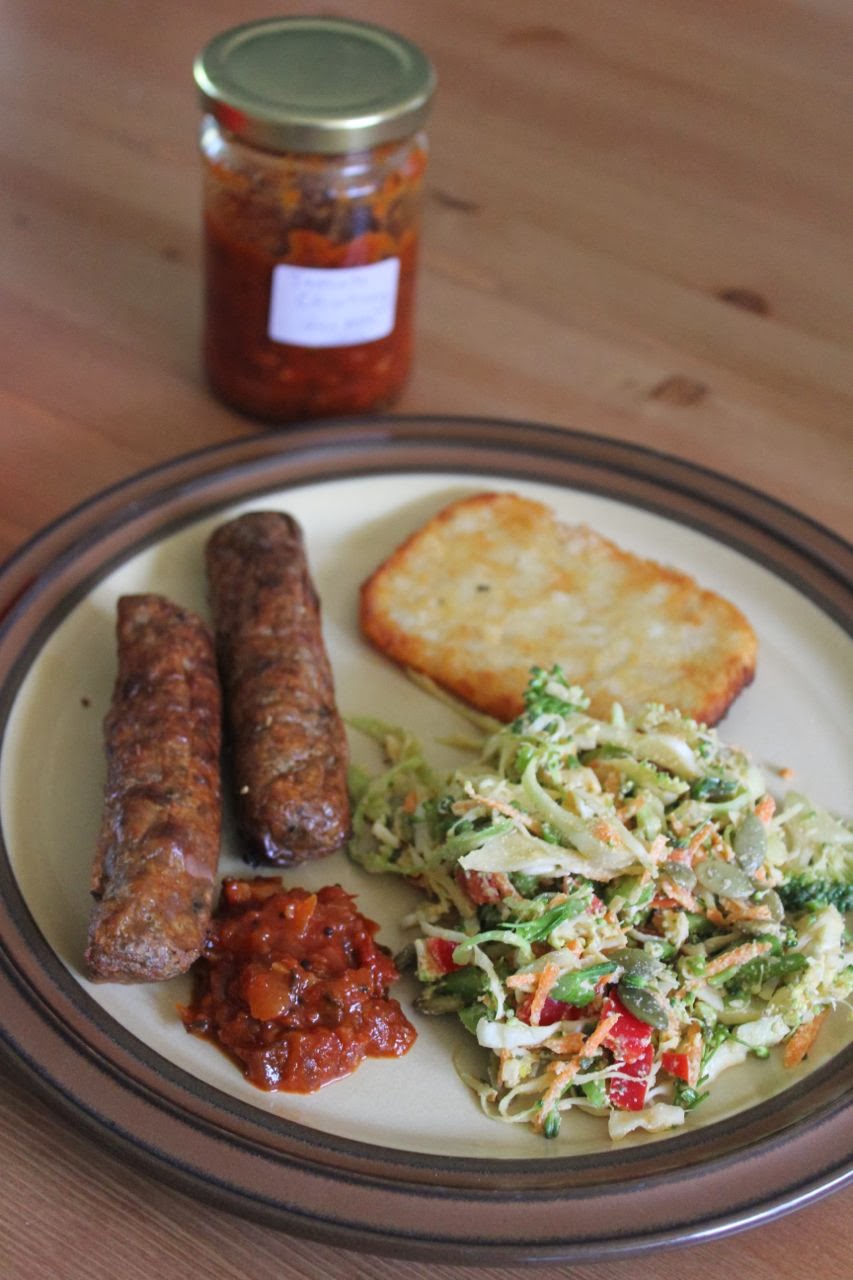 As I have said, we are eating it with lots of dishes.  Above is a dinner of sausages, hash brown and coleslaw with chutney. Below is a breakfast of rice cake, cashew cheese spread and chutney. (Yes I am still eating well, despite being so busy that finding time to blog is a bit of a struggle at the moment.) 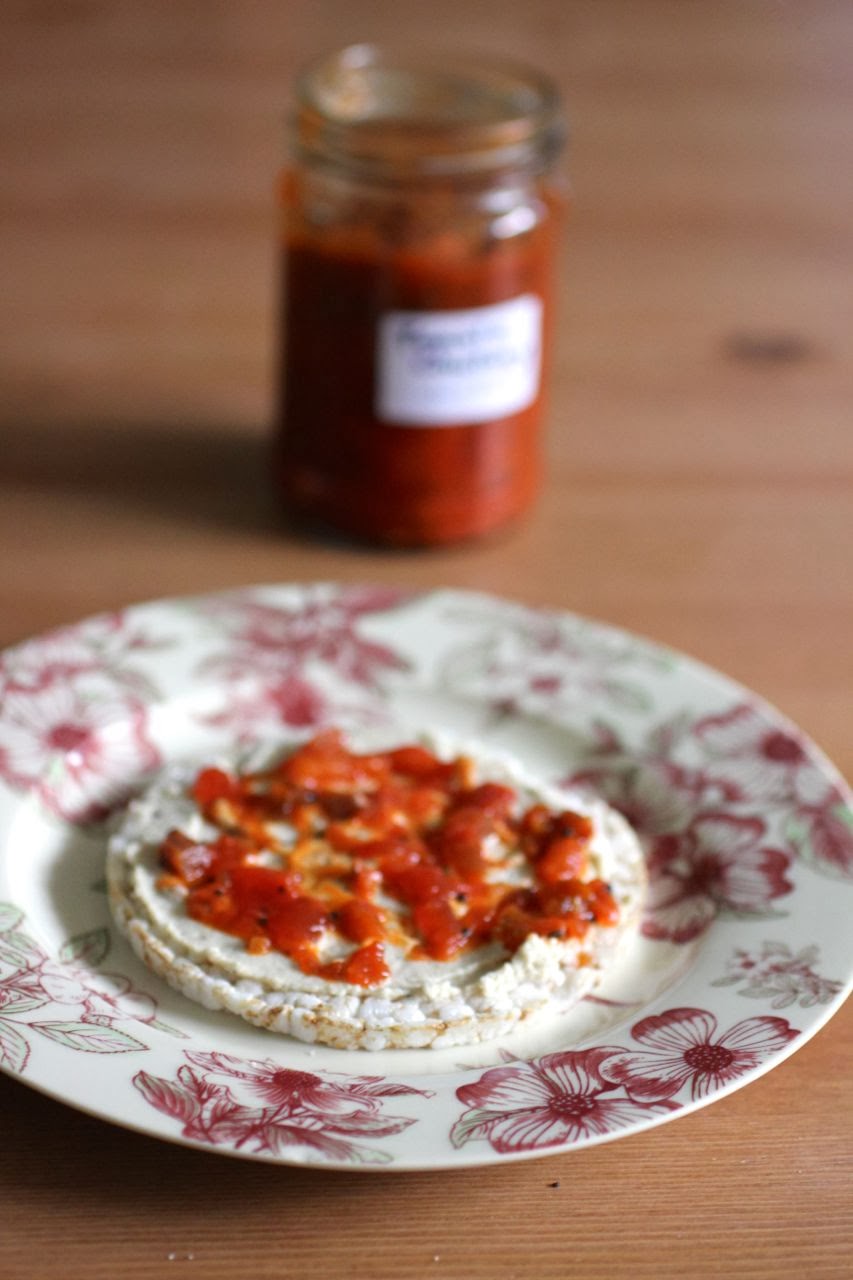 I gave a jar to my mum and she said my dad loves it.  It is like a good home made tomato sauce, full of flavour, slightly spicy but it wont blow the roof off your mouth.  Fortunately I made it last month.  Last week my mum made her annual batch of tomato sauce so we will be in less need of chutney while the sauce is in stock.  But if you don't have a mother making you tomato sauce, I highly recommend this chutney.

I am sending this chutney to Catherine at Cates Cates for her challenge, Everyone Can Cook Fabulous Vegetarian Food.  This month the theme is Attack of the killer tomatoes.

I am also sending it to Fiona of London Unattached for the No Waste Food Challenge, which is coordinated by  Elizabeth's Kitchen Diary.

And, though it is not at all relevant, I just heard it is the 150 anniversary of poet, Banjo Patterson's birth.  That calls for a rousing singsong of his most famous song, 'Waltzing Matilda'.

Heat olive oil over low heat in a large saucepan.  Add fennel and mustard seeds and heat until they pop.  Stir in the cloves.  Now add the onion, celery, and beetroot (I added them gradually as I chopped them) and fry for about 10 to 15 minutes until softening.  Remove cloves (not easy as they look like all the dark bits of beetroot)!

Add remaining ingredients and check seasoning.  (I left mine in the saucepan for a few hours at this point before simmering.)  Bring to the boil and simmer for between 30 and 60 minutes.  I found I simmered at a higher temperature at the start and then reduced the heat as it got thicker and more bubbly.  It is ready when chunky chutney consistency and not much liquid left.

While chutney is simmering, sterilise your jars and lids.  I baked mine for 30 minutes in the oven at 150 C and boiled the lids on the stovetop for 10 minutes, then dried them on a rack.  I find it easy to put all the jars in a roasting dish so I am not having to handle them individually.

Once chutney is ready and still hot, ladle into a jar and screw on the lid (using rubber gloves or oven mitts if hot to handle).  As the chutney cools the metal lids should depress, which is a sign of them being sealed.  Store in a cool place.  This only made about 4 small jars (about 1 cup each) and we are now onto the second jar, a month later.

On the Stereo:
Mr Beast: Mogwai
Posted by Johanna GGG at 12:41