Haggis chiko rolls - a marriage of Aussie and Scottish icons 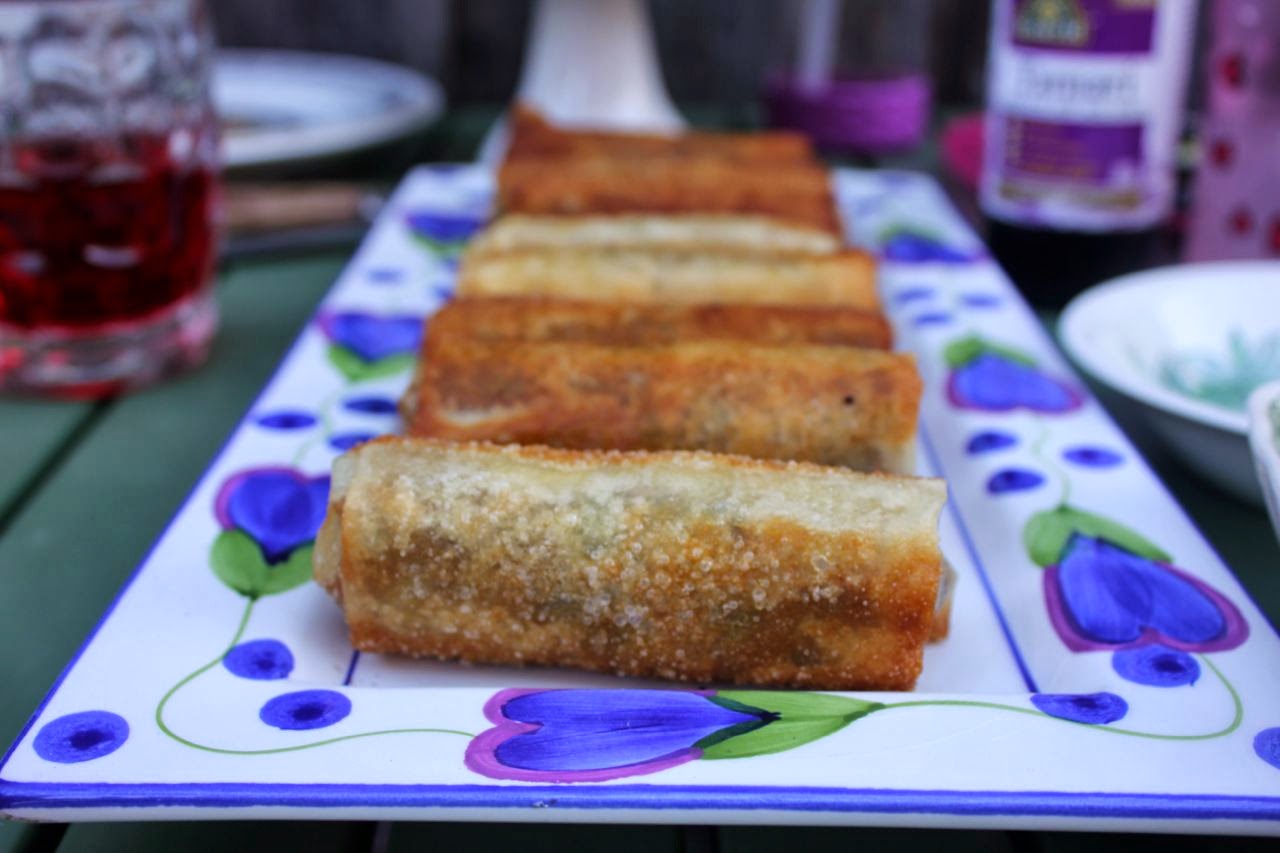 While looking at Australia Day recipes I came across a recipe for chiko rolls.  Given that Burns Night is the day before Australia Day, and time to make vegetarian haggis, it seemed a fun idea to use leftover haggis (instead of minced meat) to make chiko rolls.  It didn't happen.  Instead I made them for my birthday. The recipe wasn't perfect but it was a good start.

For the uninitiated, the Chiko Roll is an Aussie icon.  When we were kids and had fish and chips, we all had chips and then were given a choice of flake in batter, dim sums or a chiko roll.  My older sister always chose the chiko roll.  I usually chose the dim sims.  My memory of the chiko roll is decades old and not very clear.  I tend to confuse it with the dim sim filling: gloopy with strings of overcooked cabbage and gristly meat.  I am clearer on the wrapper.  It is thick and chewy and the same as they serve in corn jacks that I occasionally order at fish and chip shops today. 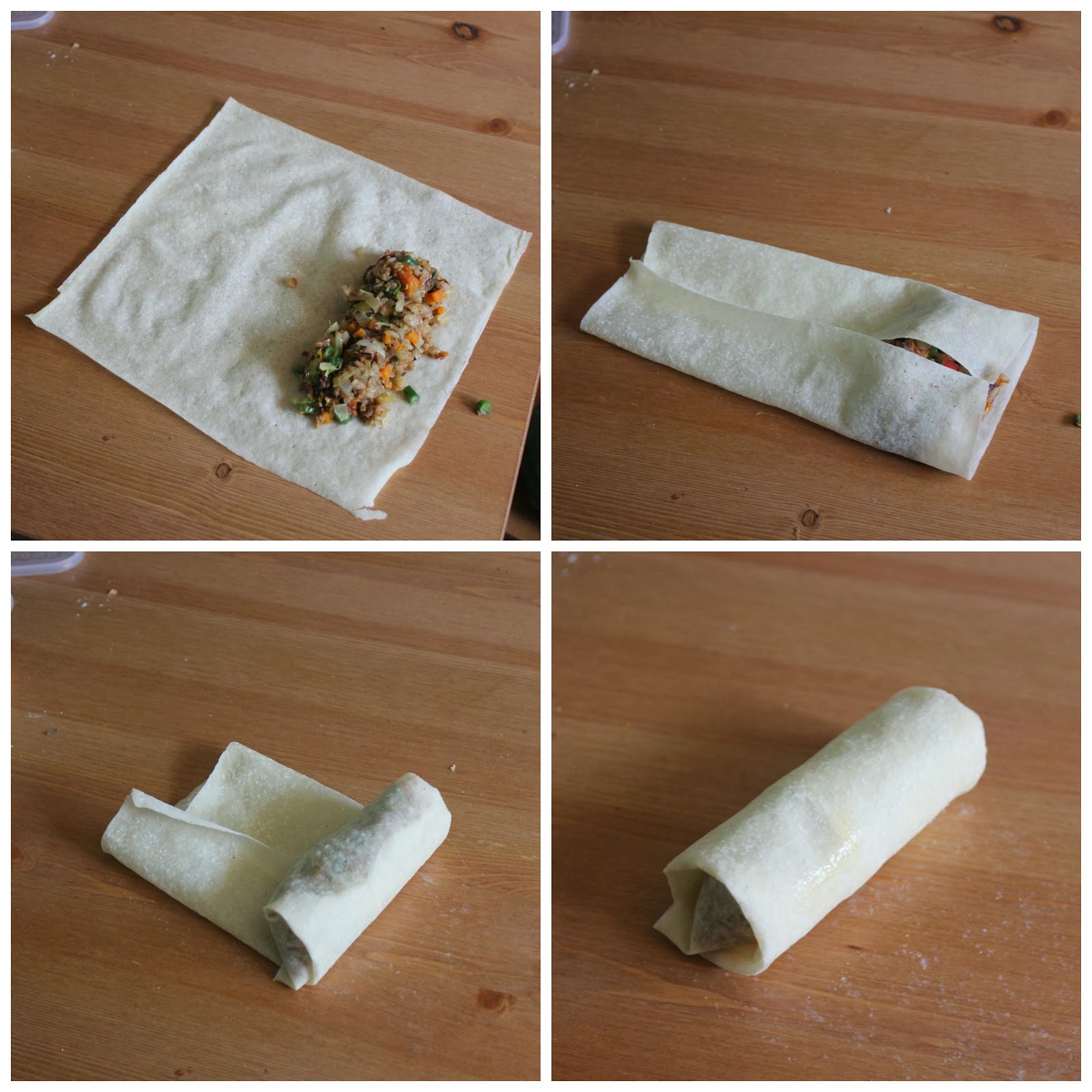 It wasn't too difficult.  In fact it reminded me of some chow mien that I made with leftover buckwheat nut roast a few years back.  As usual though, it took more time than I planned or hoped.  I have only very rarely used spring roll wrappers and found them pleasing when deep fried.

I did have my deep frying fears confirmed when I tried turning over the chiko rolls with two forks and dropped one.  The hot oil splashed on my hands and it hurt.  After that I'd learnt my lesson and used the tongs. 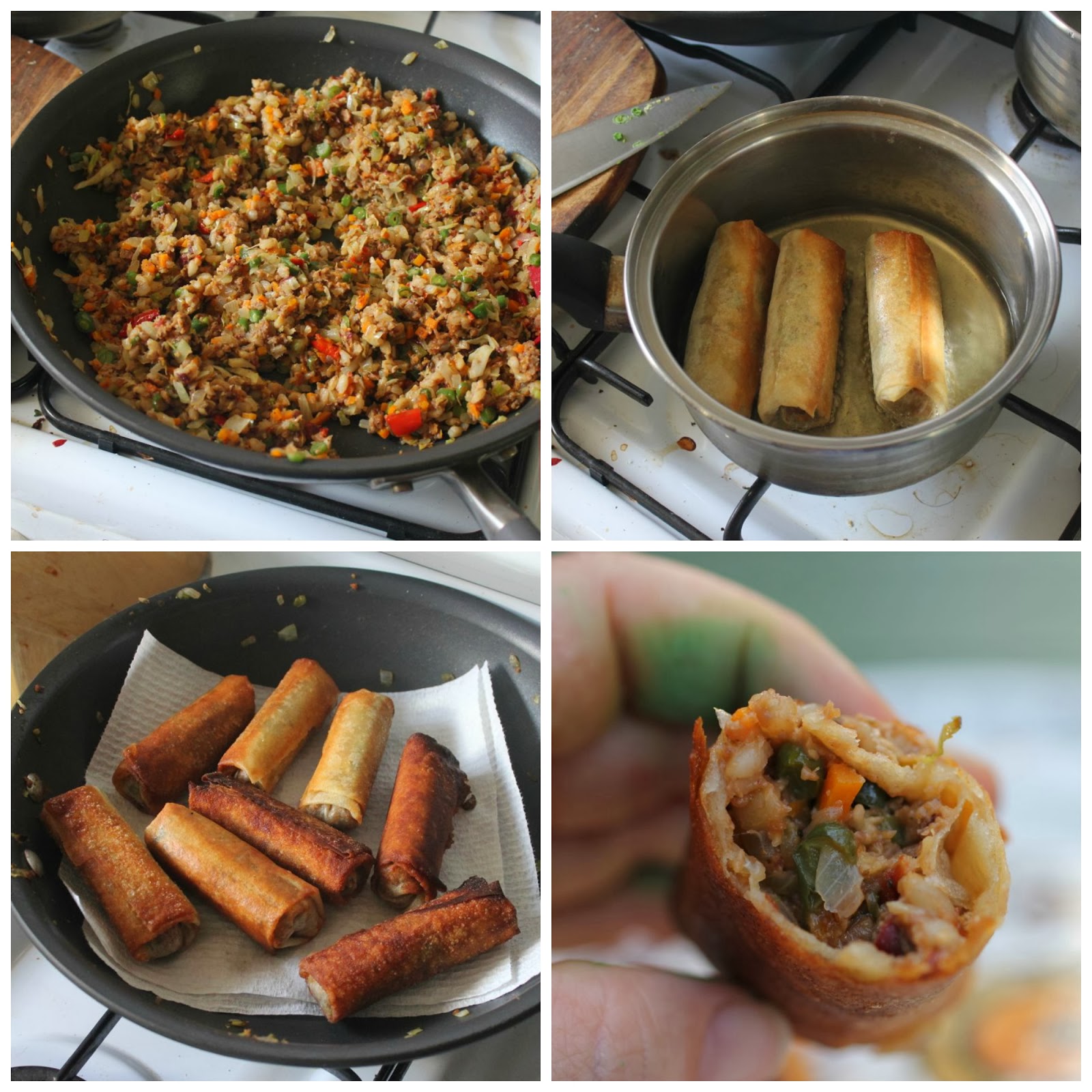 And now for my critical appraisal.  The chiko rolls were good but not great.  I don't think the haggis was quite right.  The buckwheat nut roast I had used for the chow mien was more neutral.  The oats and herbs weren't great in it. Next time I will try a more regular nut roast or even tempeh crumbles.  Some soy sauce and maybe garlic would also help with a bit more intensity.

Most of all I thought the wrapper wasn't right.  It was great for spring rolls but not the sturdy chewy wrapper of chiko rolls.  According to Matt Can Cook, the recipe for the wrappers is "proprietary" so I guess I wont be heading down the street to buy some any time soon.  If I had any spare time I would love to experiment with making the pastry.  That probably wont be happening either. 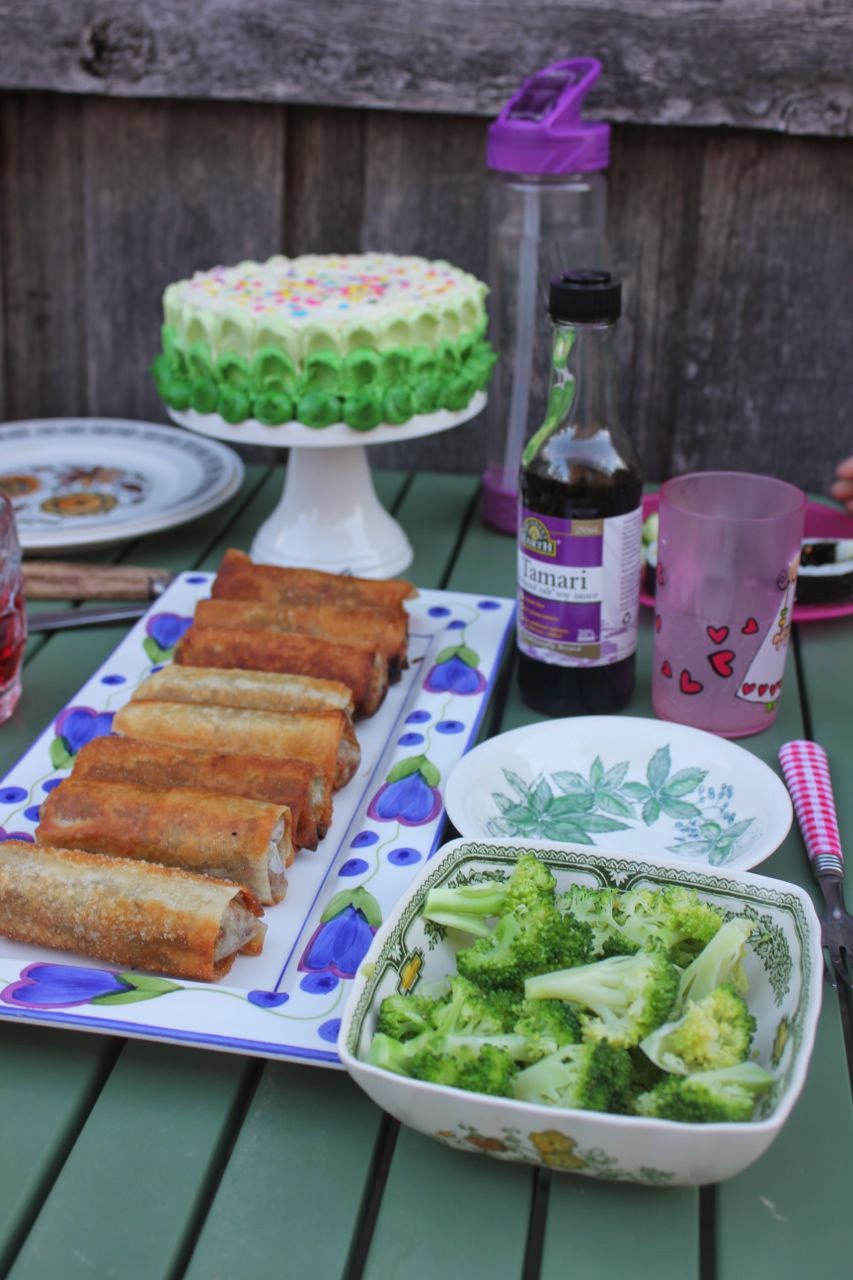 I had plans for eating the chiko rolls with a coleslaw on the side.  However after making chiko rolls and cake, I only had enough energy for some steamed broccoli.  They might have been more like glorified spring rolls than classic chiko rolls but they were delicious with some soy sauce. 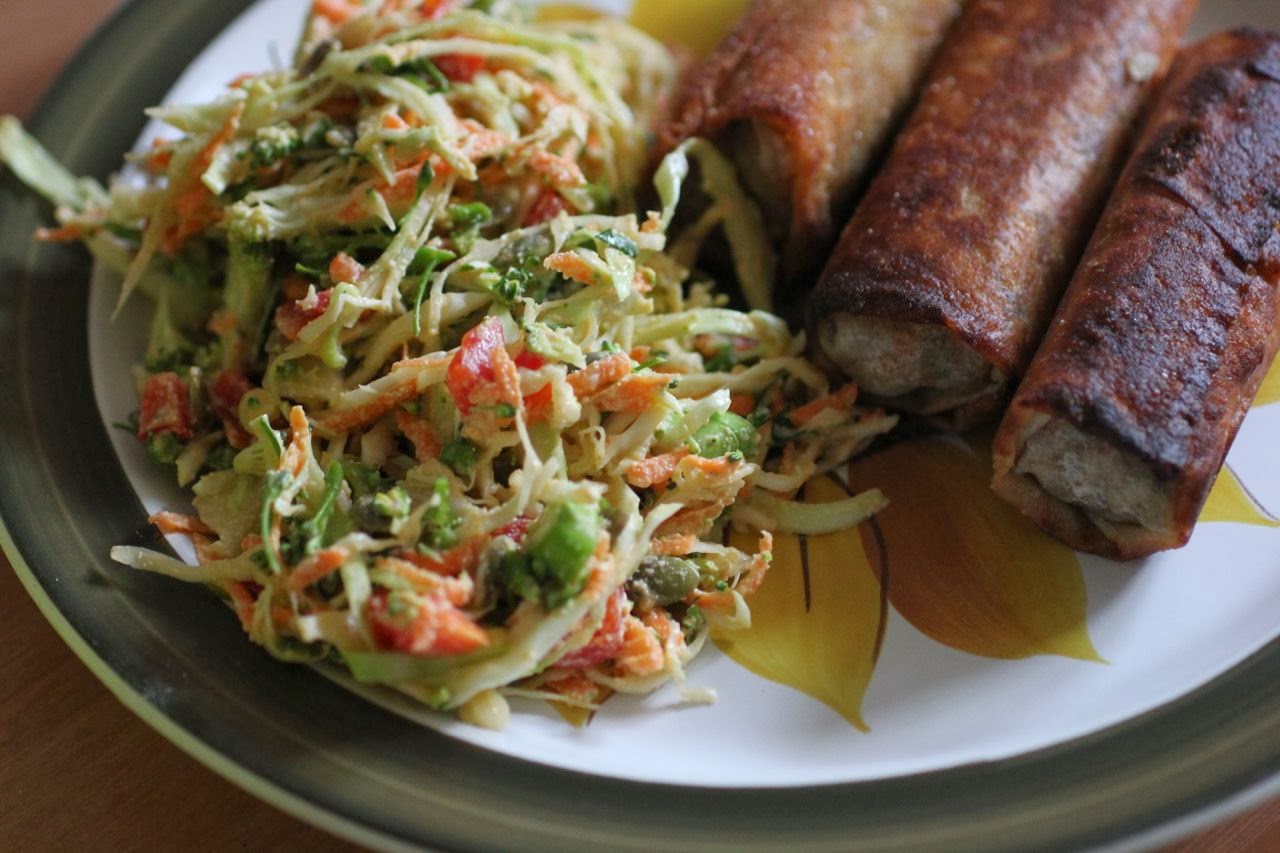 The following night they were great with some fantastic Cabbage and Broccoli Slaw - one of the tester recipes for Ricki Heller.  In the above photo they seem to be rather well cooked.  I found that cooking them to a deep golden brown actually helped them taste crispier.  I kept my filling in the fridge overnight and found them easy to wrap up and fry.  I look forward to more experimenting.

I am sending these Chiko Rolls to Michelle at Utterly Scrummy Food for Families and Helen at Fuss Free Flavours for their Extra Veg blog challenge.  Not only are there plenty of veg in the spring rolls but also in the haggis that goes into them.

Take spring rolls wrappers out of the fridge to defrost.

Heat oil in a large frypan over medium heat.  Add onion, celery, carrot, cabbage and green beans (I added them as I chopped them).  Fry for about 12 minutes from when the onion goes in - the vegies should be quite soft.  Meanwhile dissolve cornflour in water.  Add barley, haggis, stock powder and cornflour mixture.  Cook for another few minutes until mixture thickens. At the point mixture can be kept in the fridge until you are ready to use (I kept mine overnight).

To roll up the mixture into spring roll wrappers, place 3 tbsp of filling along the middle third of each sheet, fold in the sides and then roll up (as in photos above).  Dab a little egg yolk or milk on the end of the wrappers before finishing rolling up to seal the edge.

Heat about an inch of soil in a small saucepan over medium heat.  Check mixture is hot enough by putting a crumb in - if it sizzles it is ready.  Place a few rolls in at a time and turn regularly with tongs until deep golden brown.  Drain on kitchen towel.  Serve warm with some soy sauce for dipping.