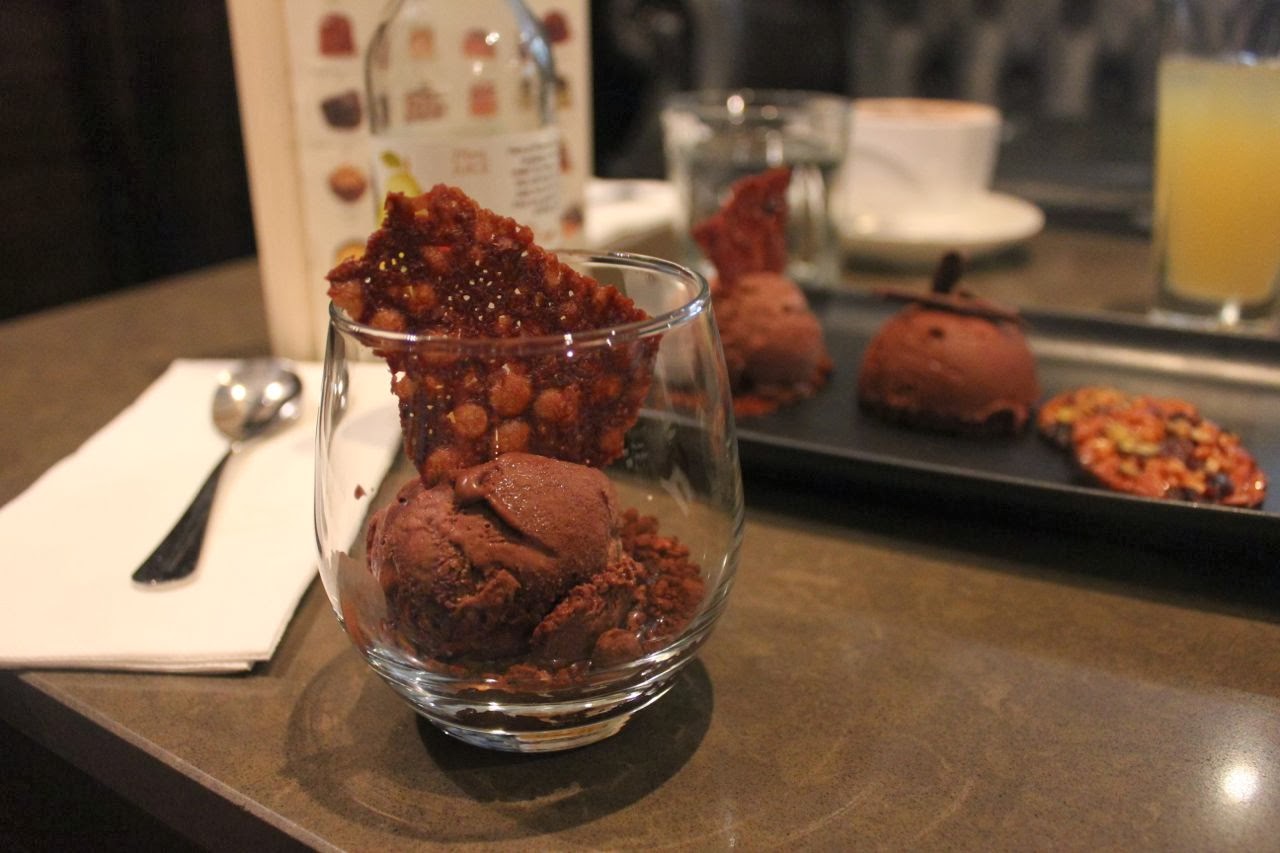 So it was my birthday recently and to celebrate E took Sylvia and me along for a chocolate afternoon tea at Koko Black in the Royal Arcade.  Cleverly he managed to combine a favourite food with a favourite Melbourne location!  It was the perfect way to spend the afternoon. 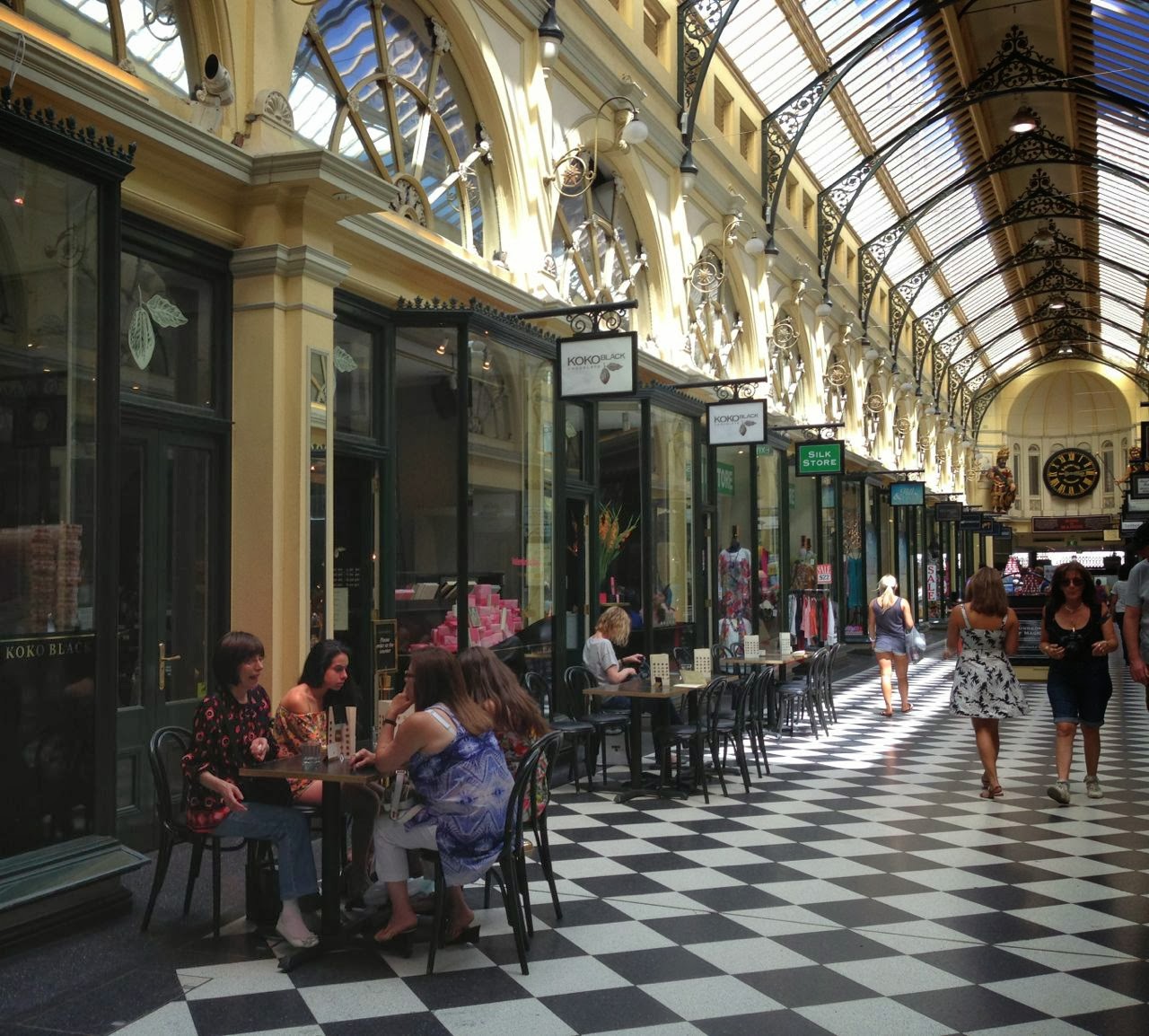 I love the Royal Arcade.  It is a place I often visit when in the city.  If I have visitors this is one of the first places I would take them.  Occasionally I even stop at Koko Black for a small chocolate.  Yet I have never stopped to eat in there.  I have been to eat in at the Carlton store.  (Yes, Koko Black has a number of locations.) 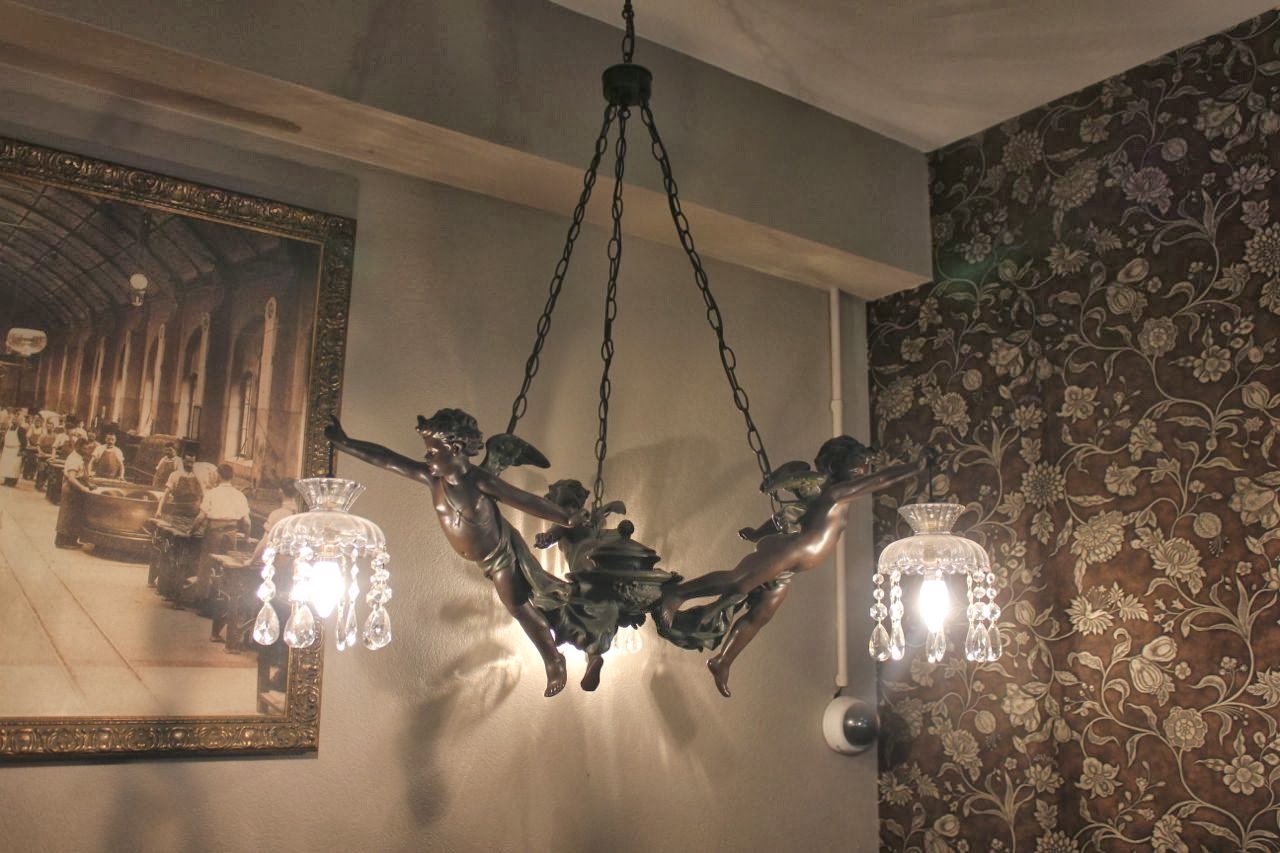 I didn't even know that this Koko Black had an upstairs.  It was a wonderful surprise.  At the top of the stairs we are greeted by this darkly sweet chandelier and a little stand with huge shards of chocolate piled under a glass dome. 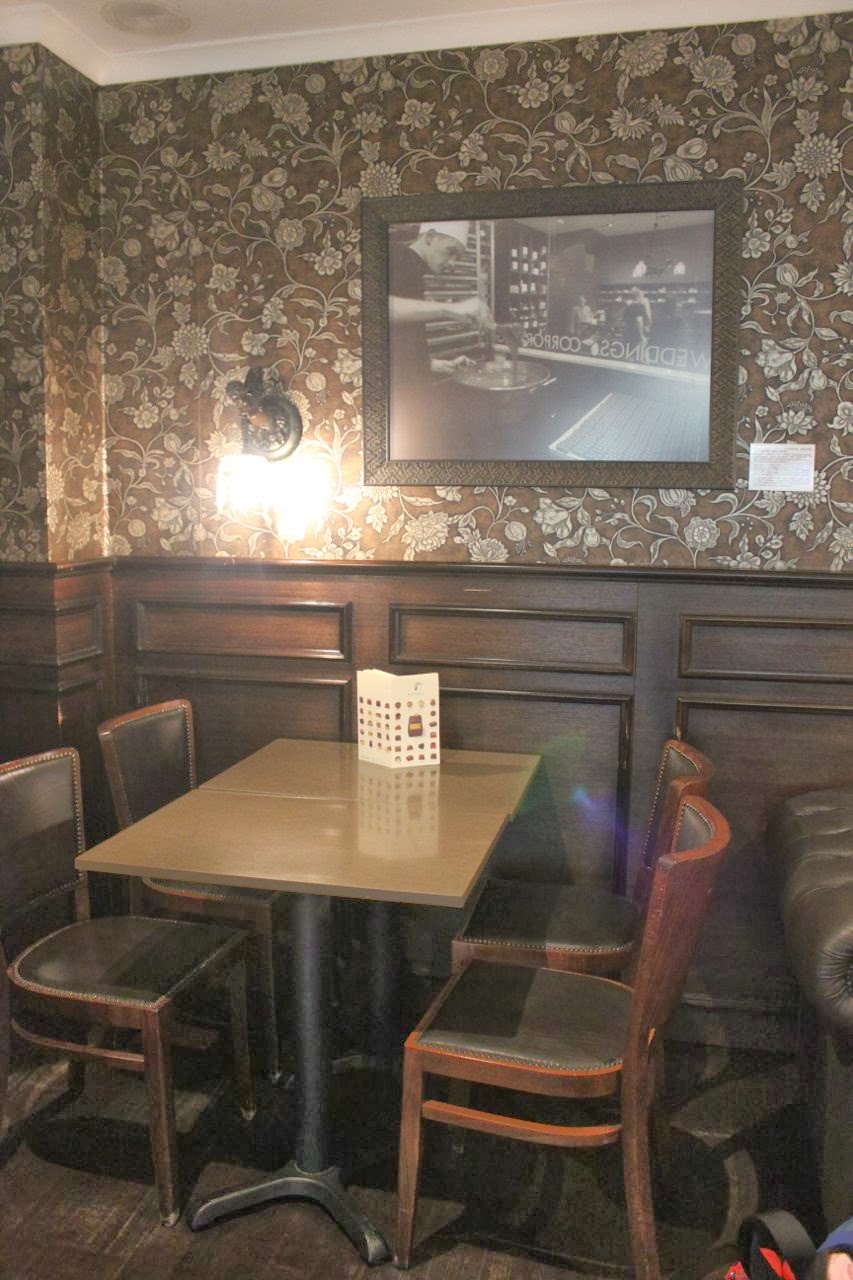 Upstairs is known as the Brugge Room.  It feels a little Euro Goth.  Dark moody wallpaper and wood panelling that wouldn't be out of place in a European grand houses; probably one in Transylvania.  The black and white pictures are a reminder of the European history of chocolate making.  It also reflects Koko Black's history; one of the founders hails from Brugge in Belgium. 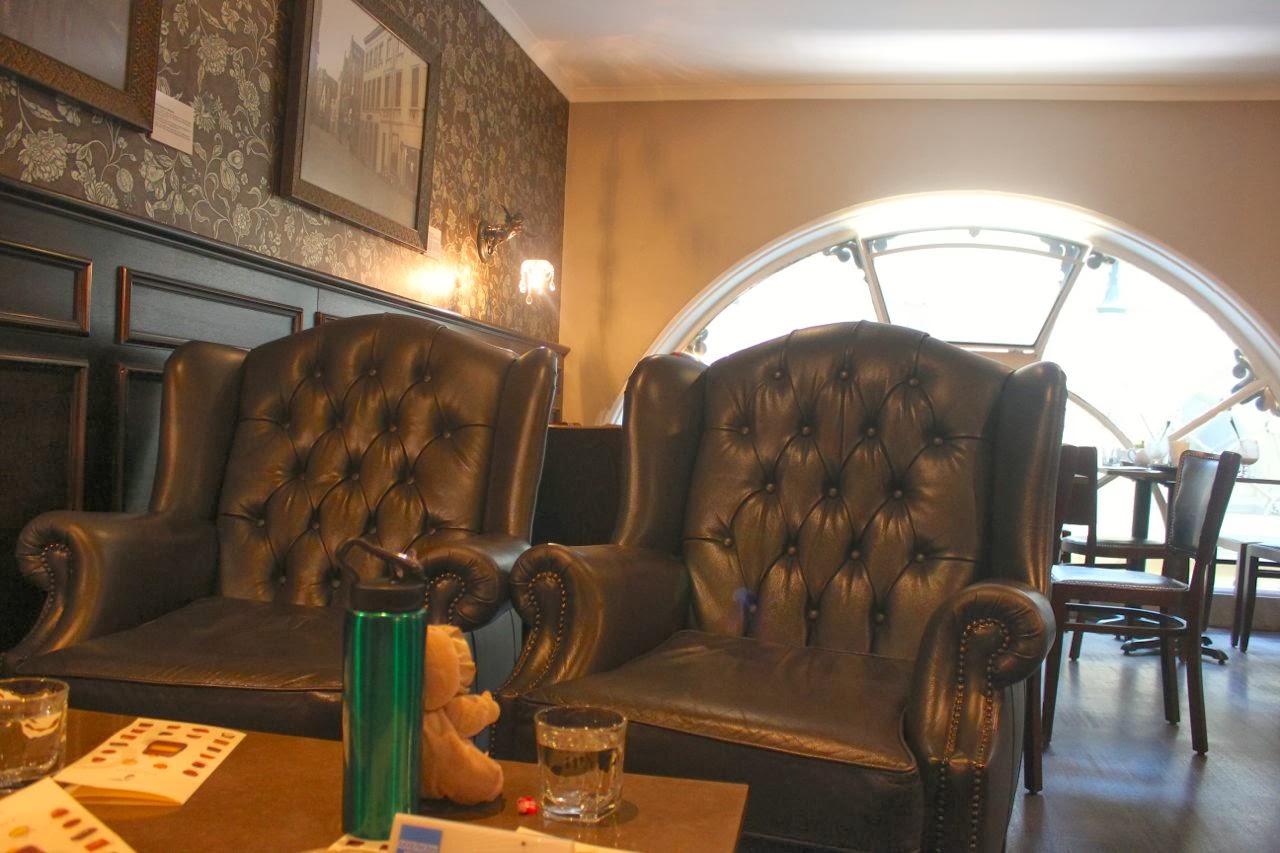 E had booked us a table and hence we were shown to a corner with a couch and two very comfy chairs.  Just the place to sink into.  You can see behind the chairs and below that there is a large semi circular window looking onto Royal Arcade.  I have been upstairs in a few shops in Royal Arcade but never seen these windows featured so beautifully. 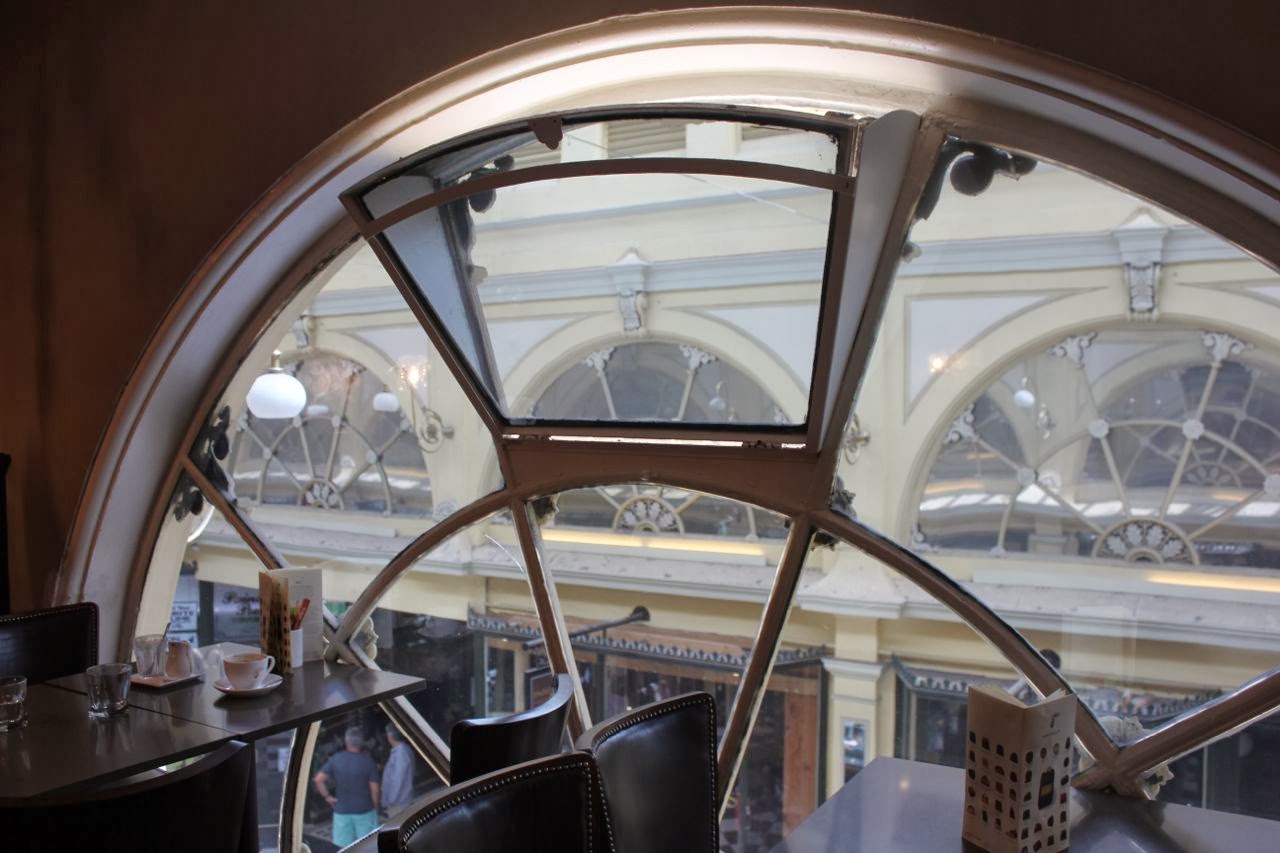 We had glasses of cold water awaiting us and were swiftly given a menu.  The service continued to be considerate throughout our visit.  When we asked for chocolate ice cream for Sylvia (with crunchy chocolate soil, a wafer and chocolate sauce - top photo), we were asked if we would like a half serve.  When it was served, the waiter asked if Sylvia would like the sauce poured on her ice cream or left on the side.  Such thoughtfulness made visiting with a small child so much easier. 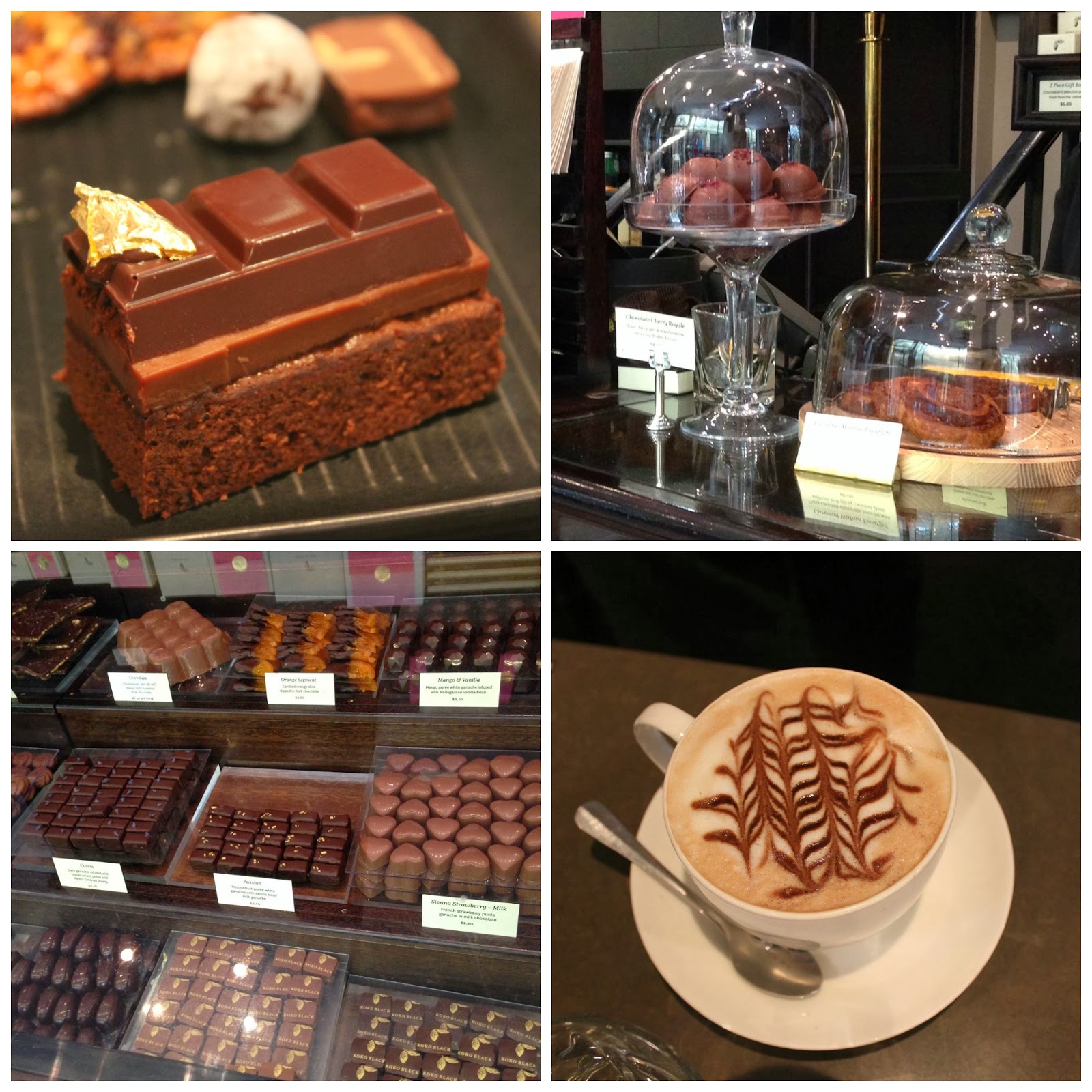 For drinks E had a soy hot chocolate which he loved.  I preferred a lighter drink and chose a pot of peppermint tea.  It was loose leaf tea.  Sylvia had an apple juice.  This is often her drink of choice and she was very happy with it.  I thought it a lovely apple juice but its sweetness was overwhelmed by the chocolate.  She was unhappy that the waiter poured her drink into a glass rather than leaving it in the bottle and we had a chat about having people look after us when we eat out. 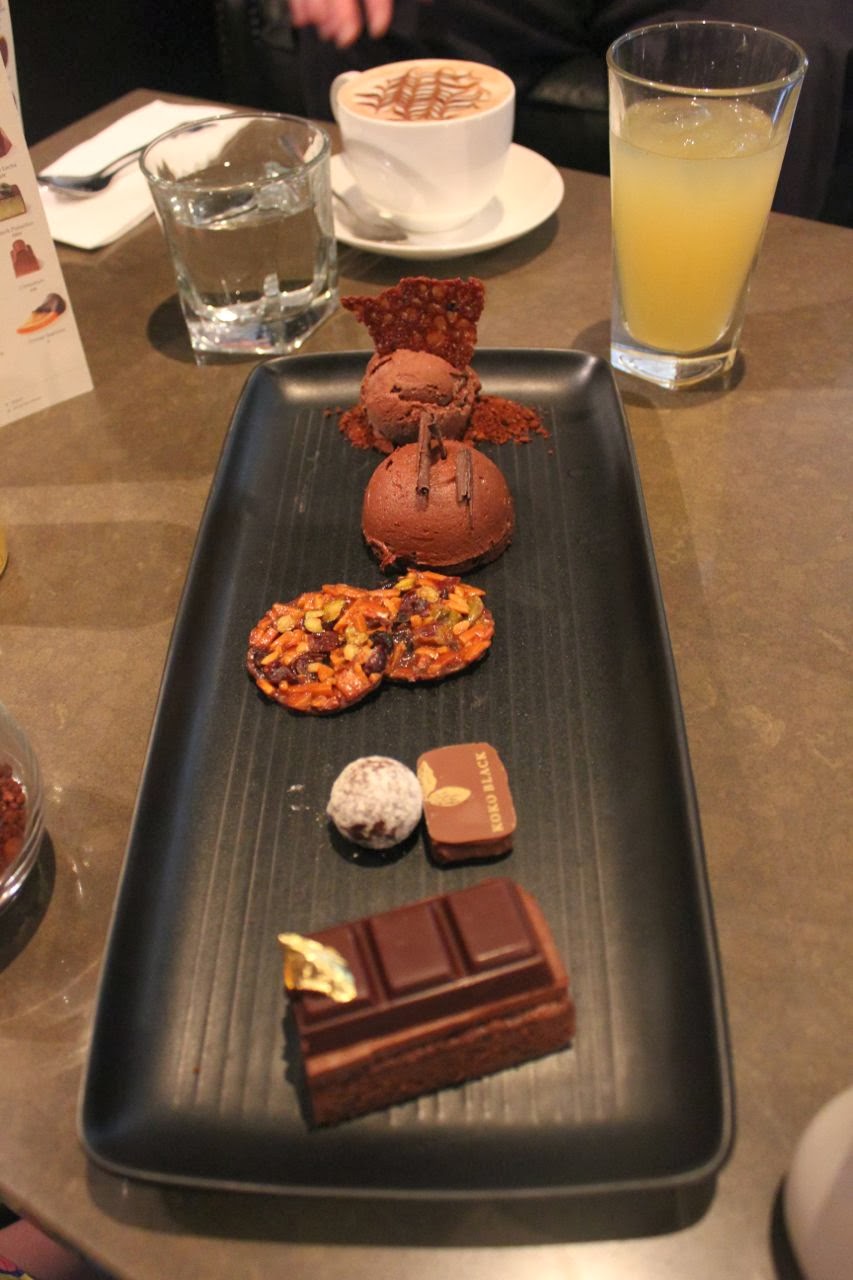 Given that we were in the Brugge room, it was fitting that E and I chose the Belgium Spoil to share.  The other tasting plate option (Dessert Degustation)had more mousses but I was happy with this smaller plate that had more chocolates.  Our plate had creamy chocolate ice cream with chocolate soil, velvety chocolate mousse, two truffles (aurelia champagne truffle and milk raspberry ganache), florentines and a slab of chocolate cake. 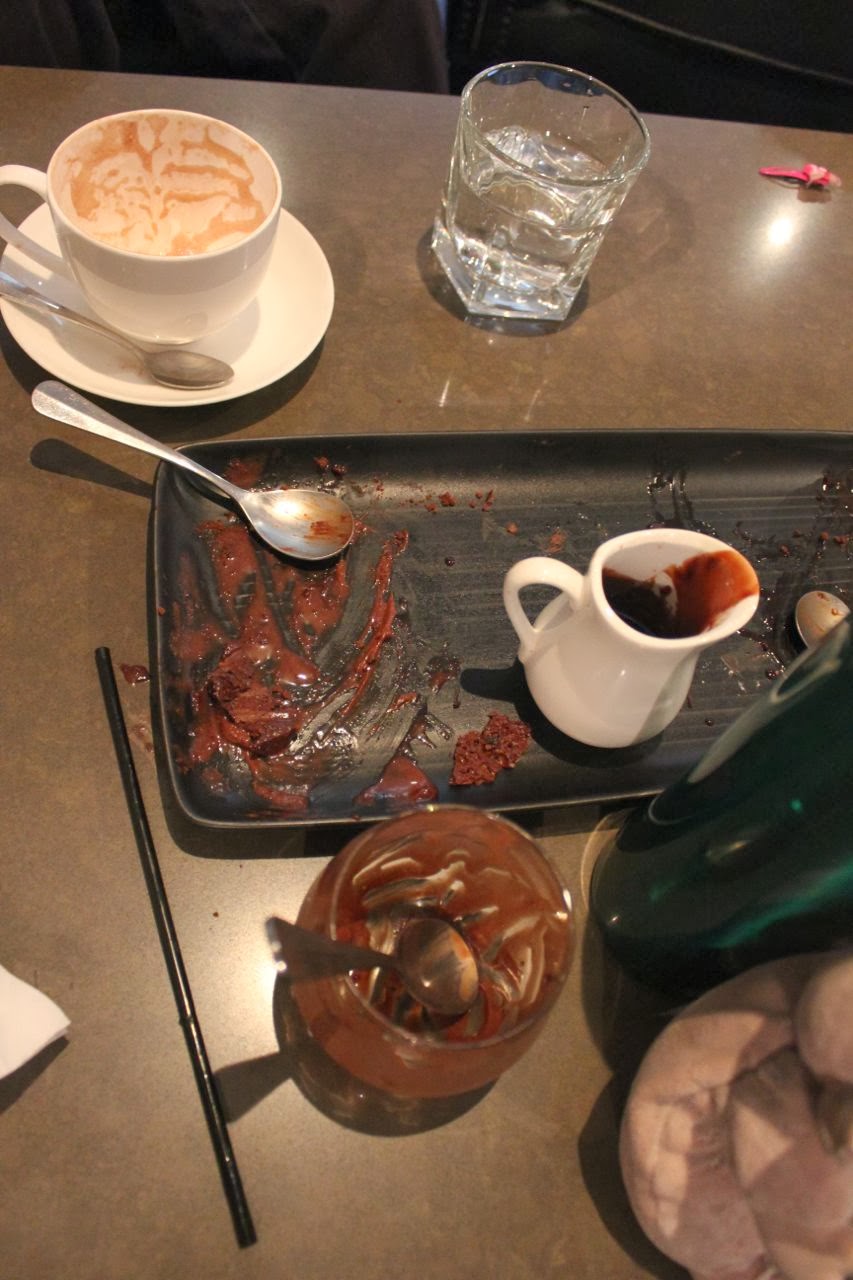 Our plate soon looked like this.  The offereings didn't look huge for the two of us.  I didn't feel uncomfortably full when I finished and yet I had had my full of chocolate.  The ice cream and mousse were wonderfully creamy and rich.  The raspberry ganache was dense and creamy but I was less keen on the flavour of the other truffle.  (Possibly because I don't drink much champagne!)   I was a bit disappointed in the chocolate cake, being a connoisseur.  It was nice but the cake was a bit light for my liking and the creamy layer wasn't really my sort of thing either.  I did love the fun presentation with the shell of a chocolate bar and a gold leaf on the top.  Best of all were the florentines.  This is a biscuit I love.  These were wonderfully chewy, nutty and intensely chocolatey. 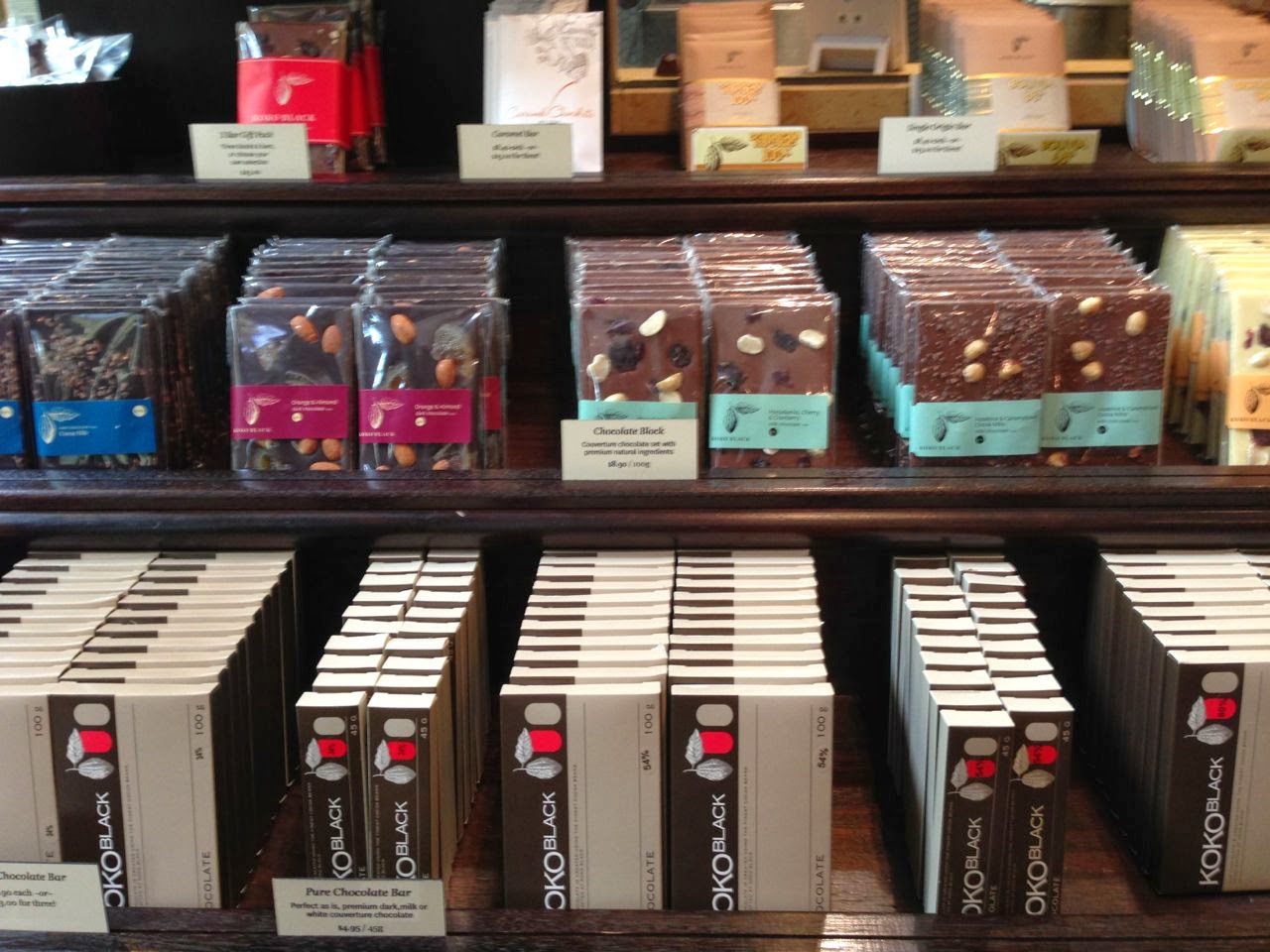 It was so lovely sinking into the large couch in that tastefully decorated room that I could have just stayed there, luxuriating in the air conditioning on a hot afternoon.  But finally we left, feeling very satisfied.  As we walked out I browsed the chocolate bars.  I was tempted by the hazelnut and caramelised cocoa nibs but thought I would leave it for another day.