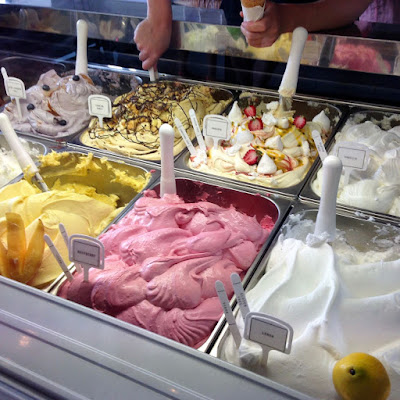 We have often driven past Minot Gelato with its white ice cream cone sign out the front and I have promised Sylvia we will go there one day.  So on a stinking hot day before Christmas when we were passing by and in need of cheering up, we headed there for a gelato.  I am pleased to say it was worth the wait. 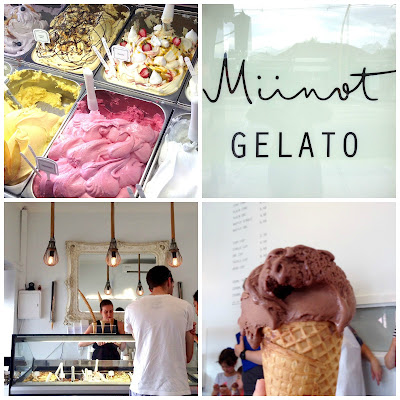 Others have raved about Minot Gelato and with good cause.  Inside, the small shop is clean and white shop with a large gilt mirror behind the counter and colourful gelati in the glass display cabinet.  There is a wooden bench for the lucky few to sit on.  Others mill about enjoying their ice creams.  And if you are particularly messy there is a sink where you can have a wash.

Sylvia chose a raspberry (vegan), E chose a blueberry salted lavender, and I chose a chocolate.  I really wanted the vegan chocolate which was wickedly dark but it had coffee in it which I don't like.  The flavours change every day.  Which means we might not have a chance to return and try out the impressive looking pavlova or the honeycomb.  Vegan and gluten free gelati are clearly marked. 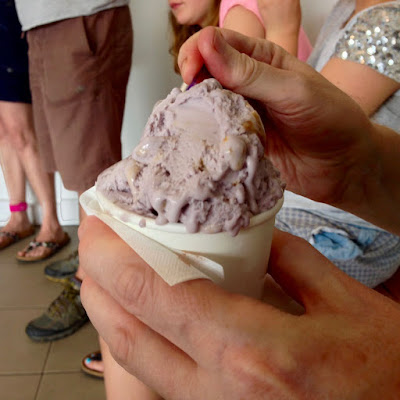 The chocolate was really creamy with loads of flavour.  I was not sure if I preferred it or Sylvia's amazing fruity raspberry.  Unlike most berry ice creams that she eats, this one tasted like it was full of fruit and was quite refreshing.  I found it hard to taste the subtlety of E's ice cream after my chocolate.  He had a blueberry lavender ice cream with salted caramel sauce and was very impressed. 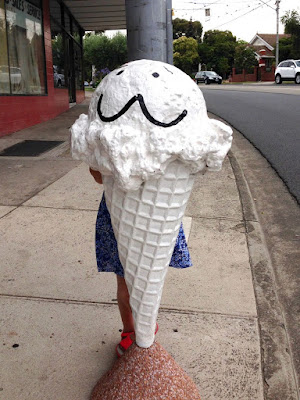 On the way out, Sylvia enjoyed being up close with the ice cream sign.  And by then we were relieved that the cool change was on its way.  Given that New Year's Eve tomorrow is forecast to be 39 C, I would highly recommend you head there but it is closed until 2 January.  After that I am sure we will be returning.