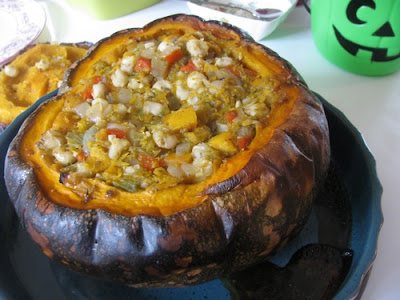 It didn't seem so crazy picking out a whole pumpkin at the Vic Market.  There you will find as many vegetables and as many variations as you might dream of.  As I walked back to work with the heavy pumpkin in my bag, I wondered what I had got myself in for.  Yet the planets had aligned.  I had tins of hominy and tomatillos in my pantry.  I had friends coming for lunch.  And now I had the pumpkin.  It was time to finally try the VT Spicy Fall Stew Baked in a Pumpkin that had intrigued me on My Kitchen in Half Cups some time ago. 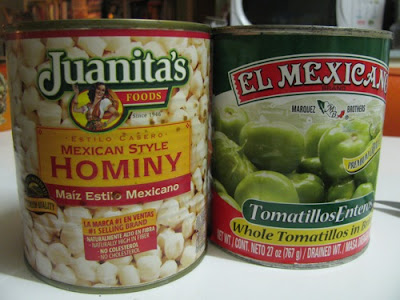 I am not sure if I was more worried about the very thought of baking a whole pumpkin or using tomatillos.  I had heard from a few people about tomatillos being very sour.  The recipe called for fresh tomatillos but I used tinned and just cooked them less.  I drained them and threw away the juice and then was unsure if it was the right thing to do.  In the end, I couldn't taste them very much.  Maybe that was a good thing. 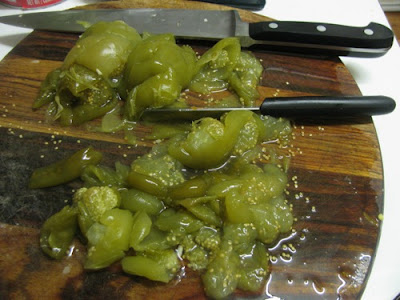 I am also aware that when we talk about pumpkin in Australia, it is often very different to what our American friends mean.  Take my pumpkin for example (photos below with the recipe).  It weighed almost twice the size specified in the recipe and the sides seemed a lot thicker than what I see in American photos.  I scooped out a lot of pumpkin before adding the stuffing and then after we had eaten the stuffing, E asked should we chuck out the pumpkin.  I cut away the pumpkin skin (I know I should have eaten it too) and used the remaining flesh for burritos, soup and cookies. 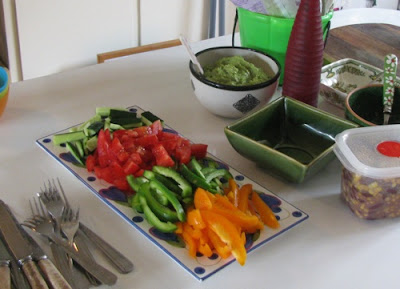 I also asked a nice man at the Vic Market if he could help me choose avocados for Sunday and he chose ones that were perfect.  The guacamole I made was just so lovely that I have put the recipe below despite having a few other guacamole recipes on the blog.  I kept it simple with minimal seasonings because we had a few kids coming to the lunch.

I had decided on a Mexican theme for lunch.  Though the table looks full, I didn't prepare many complicated dishes.  As well as the stuffed pumpkin and guacamole, I made a simple kidney bean and corn stew that I had made before.  A bit of chopping and grating finished off the meal without too much hassle. 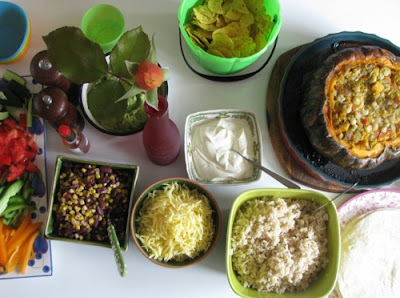 Most of my energies were saved for cleaning, dusting, mopping and sweeping.  I did so much tidying up that I found our DVD remote control that has been lost for months.  Not that I was going to fool my friends into thinking I was a neat and tidy person.  They had all shared a house with me too long to have any delusions.  It is always a challenge to clean with Sylvia about.  Finally after wielding the mop with vigour, she had a blissfully quiet moment on the front verandah.  I enjoyed the peace until I found she had been getting her fingers into the grease of my bike chain!

The house that we had shared, many years ago, was one where we ate very well.  Having five bedrooms it meant we only had to cook one night each week and everyone enjoyed their cooking night.  We shared many great meals together and it was wonderful to get together with three of my former housemates.  There have been lots of changes in our lives since we shared a house.  Marriage, kids, jobs, political work, travel, a PhD and a few publications. 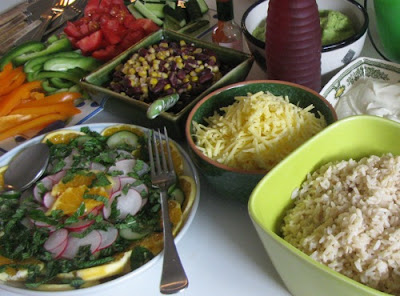 One thing that hasn't change is our love of food.  Jola brought along a fantastic salad of orange, cucumber, radish, mint with dressing of olive oil and lemon juice.  It was so good that I am willing to rethink my dislike of radishes.  Nicki and Will brought along poppyseed cake.  It wasn't a coincidence.  This was something that was universally loved in our share house days.  And still is.

It was great to get together to talk over the old times, catch up on more recent events, and meet a few of the offspring (the youngest being only 4 months old).  We indulged in a little speculation over what happened to our other housemates.  Conversation ranged from cats on cars to the recent climate change bill.  We chatted about papal knighthoods, Crownies, wheelchairs and Nicki's new children's book. 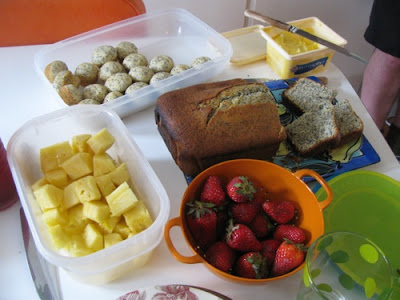 The kids had a great time playing.  The toy cash register was very popular, as were E's ukelele and Zinckie cat.  Sylvia seemed to find great joy in running around the house yelling out "walla walla"!  I was also amused to pass the cubby hut where a game of mothers was going on.  One older child was playing mother and as she served dinner she told them there was to be "no fuss".

As for the stuffed pumpkin, it was a great part of the meal but I am not sure it was robust enough to be a meal in itself.  I had kept the spices minimal in hope that some children might try it (though I am not sure any did) and kept the cheese out because I had planned to serve grated cheese with the meal.  If I made it again, I would use more spices and possibly try some cheese in it. I would also maybe cook it longer as it wasn't quite as meltingly soft as I like pumpkin to be.  But what we had was very nice, if a little mild, so I have written the recipe as I made it.  I am also sending it to Ricki for her Wellness Weekends event.

Previously on Green Gourmet Giraffe:
This time last year: Tacos with hominy chilli
This time two years ago: Edinburgh: the grim, the cosy and the grumpy
This time three years ago: Corn pancakes and salsa
This time four years ago: Fennel vs the Triffids

Serves a crowd if you have lots of side dishes
*Note: I used a 3.4kg Jap pumpkin which I think is a bit like kabocha squash.  I photographed it below next to a coffee cup to give a sense of its size.  As my pumpkin was about twice what the original recipe recommended, I increased the rest of my fillings accordingly.  I used less chilli than I might have normally and would also think about adding cheese or more seasoning next time. 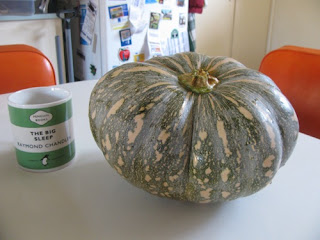 When choosing pumpkins, look for one that sits up nicely and doesn't topple over.  Give it a good wash and cut a generous amount of top off.  Scoop out the seeds and clean inside of pumpkin.  Place lid on and place pumpkin on a tray or in a shallow dish and bake at 210 C for about 1 hour. 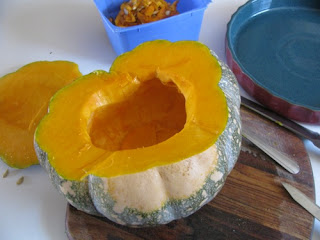 If your pumpkin is rather fleshy like mine, scoop out some of the cooked pumpkin - I think I took out 2-3 cups of pumpkin flesh.  Chop the flesh into small pieces. 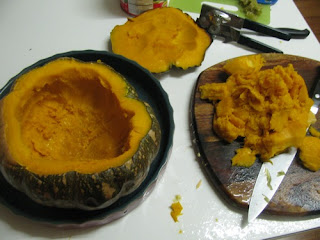 Heat olive oil in a large saucepan and fry onion, capscium, carrot and garlic together until vegetables have softened.  Stir in chilli paste, cumin and oregano for a minute or two.  Add tomatillos, hominy, pumpkin flesh and salt.  Check seasoning and adjust to taste.  Bring to boil and simmer for about 15 minutes or until pumpkin flesh is tender.

Tip hominy and tomatillo stew into baked pumpkin.  Mine was too much stew for the pumpkin so I had to set some aside.  I filled mine a bit much and let some of the liquid spill over the sides - I don't recommend this as it burnt and got smelly while the pumpkin was baking.

At this stage I let mine cool overnight.  In the morning I baked the filled pumpkin for 1 and a half to 2 hours until the pumpkin was quite soft.  Serve hot or at room temperature.  The filling keeps its heat inside the pumpkin quite well.

Leftovers: I had leftover stuffing and mixed this with leftover rice and kale from the garden to make burrito fillings (with some tomato sauce and grated cheese on top - served with guacamole and carrot salad).  Once I had scooped out the filling to keep in the fridge, I cut off the pumpkin skin and set aside the rest of the pumpkin to use.  I discarded the pumpkin skin but in future I think it would make great pumpkin skin chips.

Guacamole
Adapted from this recipe

2 avocados
1-2 small garlic cloves, crushed
juice of 1 and a 1/2 limes
shake of cayenne peppe
1-2 pinches of salt
finely chopped tomatoes and/or spring onions (optional - I didn't use for this guac but I often do)

Mash avocado flesh in a bowl with a fork.  Stir in remaining ingredients until smooth and green.  Taste and adjust seasonings as desired.  Go easy with the salt and lime juice - it is easy to do too much and ruin the dip.  Best eaten on day you make it.

On the Stereo:
The rip tide: Beirut
Posted by Johanna GGG at 22:53