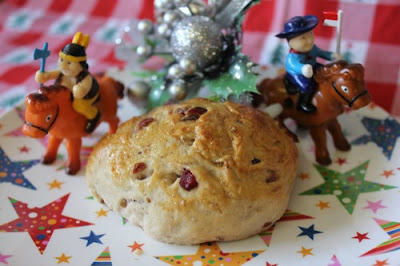 It has been a good year for baking bread.  Just as well, given that I have less time to go to fancy bakeries to buy bread.  The more bread that I bake, the less content I am to buy any old loaf.  For Christmas morning, I decided I would bake a special loaf.  Then I remembered Kari's Cranberry Rolls, which although vegan, seemed perfect for my Christmas morning tradition of posh cheese on toast. 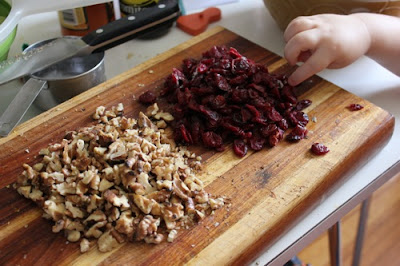 She filled her rolls with cranberries but I used a mixture of cranberries and walnuts like the original recipe.  I love walnuts and didn't want the bread to be too sweet.  When I made this decision, I had forgotten I needed the nuts for my Christmas nut roast.  It meant an emergency dash to the supermarket on my bike.  Kari used a dough hook but I found it easy enough to knead the rolls by hand and this is the method I have written up below.  I was pleased to be able to use an egg to glaze the rolls and then put it into the roast so there was no waste.  Christmas eve was busy and at one stage I had to suggest E take Sylvia for a walk and take his time.  I was relieved to get the rolls made by dinner time. I wanted to make sure we had a fancy Christmas breakfast this year.  So often I aim for a nice breakfast but we are so distracted that I hardly sit down and never have time to set the table.  So on Christmas Eve, as well as preparing the rolls, I set the table before heading off to bed.  It meant that once we had opened our presents on Christmas morning, we could sit down to eat with a table cloth (a Christmas present from Jim and Sally a few years back) and some of our festive tableware. 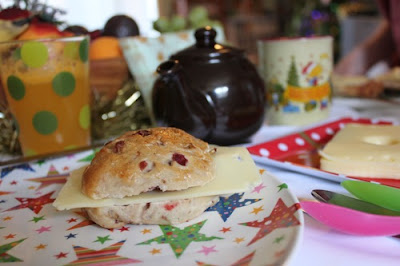 The rolls were delicious.  Not only were they great on Christmas morning with a slice of jarlsberg cheese and a lick of cranberry sauce, but we also had them with chestnut soup on Christmas Eve and took some to my mum and dad's place later so that we could snack on them in the evening with the leftover nut roast. 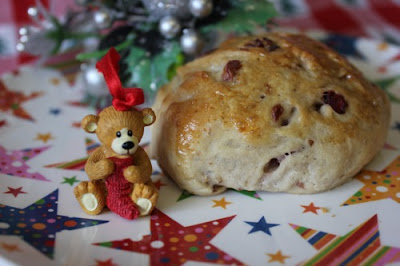 We had a lovely Christmas day.  I will return to tell you more about the day soon.  Meanwhile, I want to thank everyone for the lovely Christmas wishes that I have received in comments and to send these rolls to Susan for YeastSpotting.

Previously on Green Gourmet Giraffe:
This time last year: Cinnamon Stars for Christmas
This time two years ago: Glögi by the tree
This time three years ago: Festive profiteroles with salad
This time four years ago: Christmas truffles and fruit salad

Dry fry the walnuts in a small frying pan. 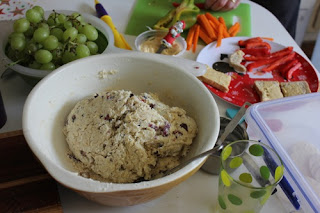 Mix together the flour, brown sugar, yeast and salt.  Stir in the milk, oil, egg, cranberries and walnuts.  It will make a sticky mixture.  I let mine sit for about 5-10 minutes while I had something to eat. 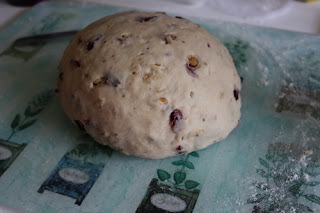 Knead on a floured board until smooth and supple, adding flour as you go.  Tracey suggested you might need about an extra 1/2 cup of flour.  I think I kneaded for about 4-6 minutes. 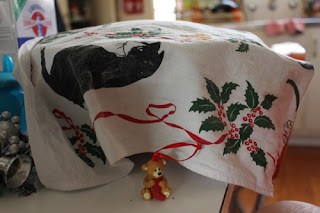 Scrap the edges of the mixing bowl and then place the dough in there, covered with a dry tea towel, for about 1-2 hours or until risen.  This will vary according to how warm the dough is.  It was 30 C when I baked ours and the dough was risen after about 1 hour but with rushing about after Sylvia it took me about 1 1/2 hours to get to it. 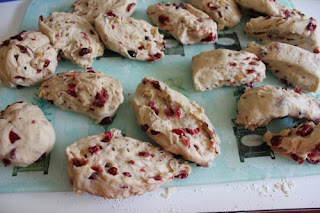 Return dough to lightly floured board and knead briefly.  Use a sharp serrated knife to cut dough into 12 to 16 pieces, depending on how big you want the buns.  (I made 16). 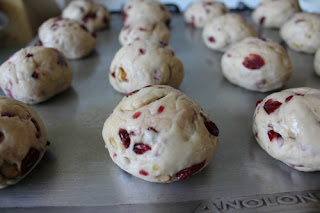 Lightly knead each piece and roll on the board under your palm until smooth(ish).  Drip a little oil in your mixing bowl and when each ball is ready, dip in a little oil and use your hands to roll the ball so it is completely covered in oil - there should be just enough oil to make it glossy but no more.  Place oiled balls on a lightly greased tray (or a tray sprinkled with cornmeal) with some room to expand. 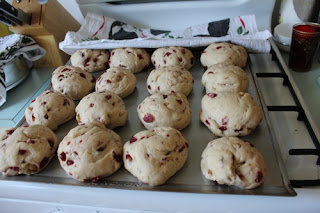 Cover with dry tea towel and leave for about 1 1/2 hours or until risen to 1 1/2 size.  I think mine too a little less time.  While rolls are rising, preheat oven to 200 C.  When rolls are risen, glaze with eggwash and bake for 15-20 minutes (I let mine bake for 20 minutes) or until golden brown. 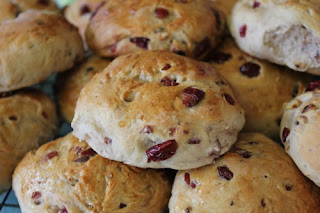 * Update December 2016: I made these vegan this year.  I used 1 tbsp chia seeds soaked for 5 minutes in 3 tbsp water instead of the egg.  I used soy milk instead of the milk.  When I first made these I substituted 1/2 cup of sour cream for the milk so I guess I could also add a squeeze of lemon juice to curdle the milk.  I didn't glaze the buns because I forgot to cover with oil until they had risen quite a bit but if I hadn't I would brush with soy milk.  They were really good.