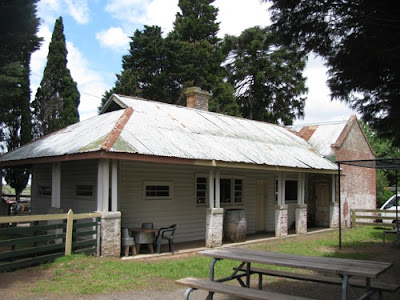 Last Sunday we had organised to meet friends at Chesterfield Farm.  We had plenty of picnic food, boundless enthusiasm from Sylvia but unfortunately her wee friend was out of sorts and the weather was unkind.  Nevertheless we headed out in the cold to the farm.  It was a great outing.  The sun shone.  The animals were friendly.  So was Santa Claus.  It is just a shame that Chris, Yav and Florence couldn't join us.  I'll tell you about our picnic at the end of the post but first let's take a wander around the farm. 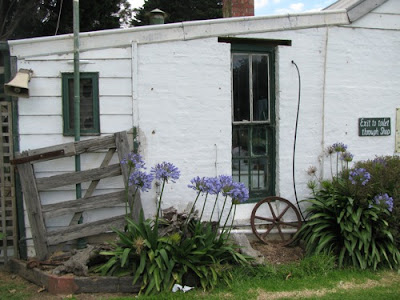 We arrived at the farm to the sound of magpies warbling and a whiff of manure.  It felt like the country.  However if you looked to your left, there were electricity pilons and to the right in the distance was the freeway.  Chesterfield homestead was built in 1859 and it was the centre of a dairy farm for many years until it became Australia's first feedlot farm in 1950.  In 1997 it was opened to the public. 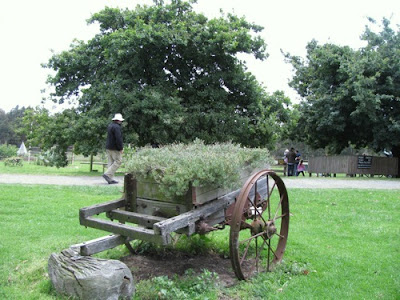 When I was at primary school, we had our annual camp right next to a dairy farm.  We used to visit and see milk being produced.  I lived in a country town so farms weren't that unusual for the kids in my class.  But this farm, in the South Eastern suburbs of Melbourne is a great opportunity for city kids (Sylvia included) to see a farm.  Even though it is run as a tourist operation, it still gives valuable experiences and learning. 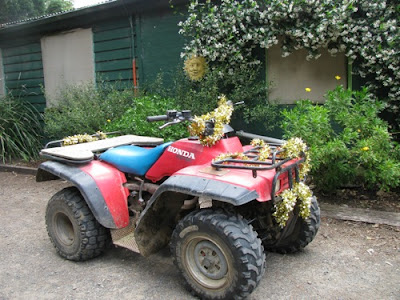 Our first sight upon entering the farm was Santa leaving on a fire truck.  It seemed we had missed our chance to see him but we saw him later on this monster bike.  There were quite a few children's Christmas get-togethers going on at the farm.  Once Santa got off, the farmhands told Sylvia she could sit on the bike.  She was a bit shy but got on later with me for a photo op. 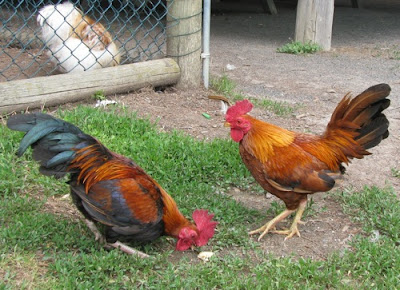 We had our lunch at picnic tables by the chook yard.  The hens had an enclosure but were quite bold in wandering about at leisure, as were other animals.  Sylvia was quite happy to watch but not get too close. 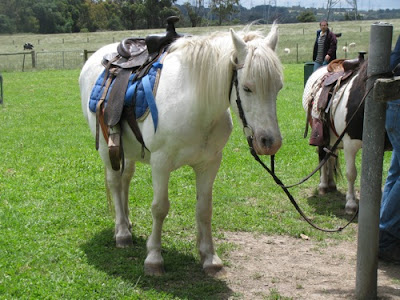 She was very interested in watching what was going on over at the pony rides.  But she is not quite old enough or confident enough for a ride herself.  We also decided not to go on the tractor rides.  We did however purchase some feed and spent a pleasurable time feeding the donkeys.  E loved them nuzzling his hand as they ate but Sylvia was quite happy to just dole out the feed to us. 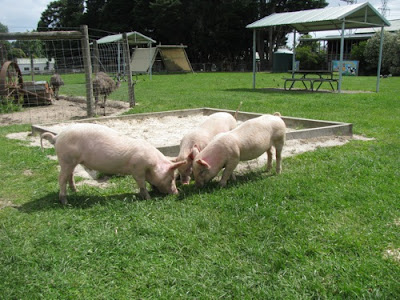 We also visited the barn with the younger animals.  Signs encouraged us to pat many of the animals.  Again, E loved patting lambs and bunny rabbits but Sylvia didn't want to get too close.  She did find some amusement in the pigs (who were quite frisky) because one of her favourite DVDs is Peppa Pig.  I enjoyed seeing these three pigs wandering about outside.  I think they are getting together here to discuss what to use to build their houses - straw, sticks or bricks! 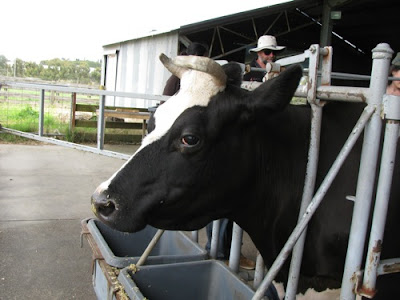 Once a day, and twice on weekends, there is a farm show.  It was interesting to see a dog round up the sheep and then see Dolly the cow being milked but it was the most staged of all that we saw.  We sat in a stadium of tiered seats to watch - though we did have the opportunity to milk the cow and pat her.  I would have preferred a bit more time to just wander through the paddocks and see the animals. 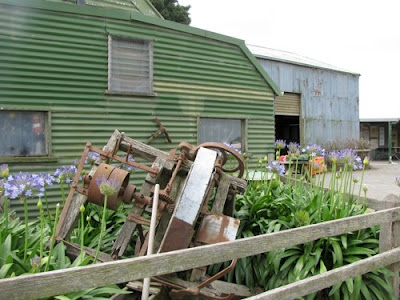 Instead, we stayed around the homestead, took some silly photos, fed and patted animals and admired the old farm machinery.  We met our friends at the nearby Wheelers Hill Hotel for a quick drink afterwards.  We had planned to go to the Monash Gallery of Art that is also close to the farm, but by the time we left Chesterfield, it was too late. 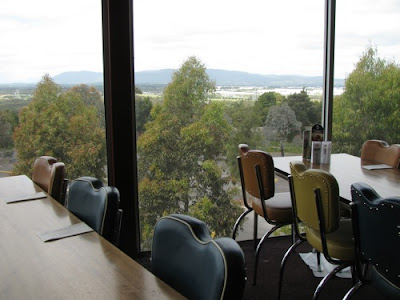 If I was looking to buy food, the gallery cafe or the hotel seemed to offer a more sophisticated menu than the pies and crisps at the farm.  But the best option was to take a picnic.  I had decided to make a Smoky Red Pepper Hummus from Rose Eliot's Vegetarian Supercook for the Cookbook Challenge theme of Red.  I almost didn't because it was so difficult getting the lid off the jar of roasted peppers but after much swearing and sweating, we did it. 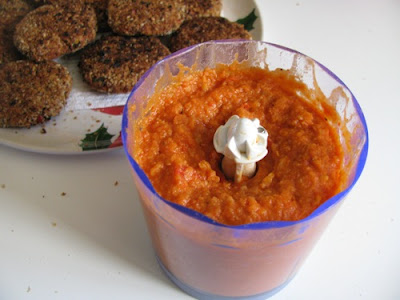 Maybe it is more orange than red but it doesn't matter as the Cookbook Community page is out of action.  But I am determined to see the challenge through to the end of the year.  And I was glad I had made the dip.  It was a lot lighter than regular hummus albeit full of flavour.  Though I had plenty of crudites on hand, it was best with rice crackers and corn chips.  I had though it would last ages but It was gone by the end of the weekend. 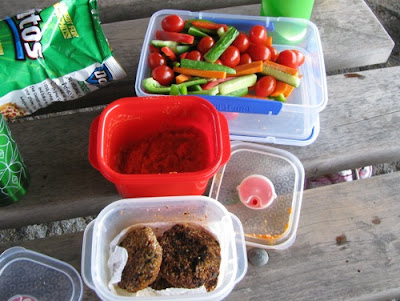 I will write more about the burgers that I served with the humuus, but for now I will tell you that if the weather is a bit chilly, E highly recommends taking a thermos of boiling water and some teabags to the farm.  And take a sunhat in case the sun shines.  It was that sort of weekend.  (Fortunately it was not really bad weather like that in Scotland.)  Rain or shine, it was great fun!

Blend all ingredients in food processor or blender until smooth.  I did this in my little blender attachment to my hand held blender.