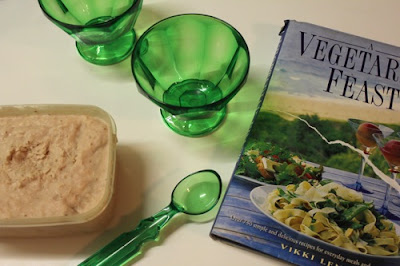 I have come to the conclusion that I don't choose change.  It chooses me.  It usually drags me along screaming and kicking!  For those who might seem surprised to see an ice cream recipe on my blog, I am not referring to that.  I mean that I had to buy a new camera today.  Yesterday I took a new water bottle to the workplace Christmas lunch.  Events conspired against me (but no alcohol was involved) and the new bottle emptied itself into my camera.  The view finder resembled a fishtank.

I made this ice cream last night but there are no photos of making it because I was without a camera!   But I was determined to make it for a Christmas meal at home tonight.  I had planned to make icy poles for the penultimate Cookbook Challenge because the theme was cool.  Then I saw that Vikki Leng had quite a few eggless ice cream recipes using agar agar in A Vegetarian Feast.  I was intrigued. 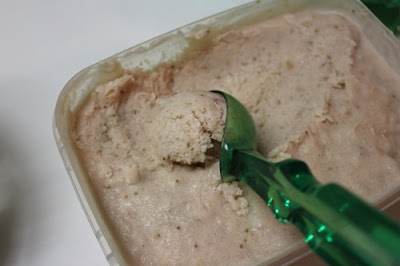 She claimed that the agar agar and honey (these are not vegan recipes) kept the mixture soft and that no ice cream machine was needed.  I've always shied away from making ice cream because I dislike eggs and don't have an ice cream machine.  Problem solved!  Or so I thought.

Making the ice cream was easier than I expected.  Setting it was harder than I expected.  After leaving it overnight it had started to harden around the edges.  I turned up the freezer.  Even tonight, 24 hours later, it was quite firm around the edges but in the middle it was sloppy.  Vikki said the honey would keep it soft and Nigella (which I did some research) said that cold kills flavour, I added an extra spoonful of honey.  I would only add 2 tablespoons in future.  Not only is the ice cream soft but it tastes more of honey than strawberries. 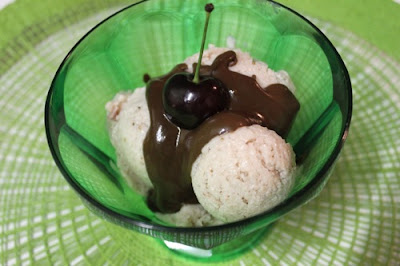 So the ice cream is not perfect but it is better than my first attempt last year.  Without eggs in the equation, I am quite happy to experiment, especially when it is so hot.  I am less happy to experiment with my camera but that is a necessary evil.  I am all thumbs with it right now.  You may notice this in some of the photos.  I am also very nervous about cameras and accidents.  But as I heard on the radio twice lately - you have to live life.

Heat apple juice, castor sugar and agar powder in a small saucepan until they boil (mine had a lot of froth when it boiled).  Reduce heat and simmer.  Let sit for about 2-5 minutes.  I found after 5 minutes that mine coated the spoon a bit like a jam that is starting to set.

Blend milk, strawberries and honey in the food processor.  While motor is still running, drizzle in apple juice mixture.  Leave to set and then blend in the cream.  After 30 minutes (before adding the cream), mine had set enough that when I added the cream it just sat on top of the mixture.

Tip mixture into plastic tub - allowing a bit of space for ice cream to expand when it freezes.  I had to turn up my freezer to full blast because it was still soft in the middle even after 24 hours.  Maybe it was because I used 3 tbsp of honey and if it is reduced to 2 tbsp it might freeze a little more.

NOTES: Vikki Leng suggests substituting greek yoghurt for cream.  I will try this next time because I found the cream quite heavy.  I served my ice cream with a bitter chocolate sauce (50g of 70% dark chocolate and a few spoonfuls - ie the rest of a 300ml tub - of cream melted together in the microwave - probably enough for 4).

On the Stereo:
Christmas is a Coming: Bing Crosby
Posted by Johanna GGG at 23:45