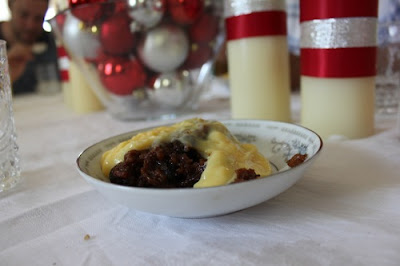 Christmas day arrived this year with a feeling of relief that all the baking and presents were sorted.  It has been a busy year.  Yet we got there.  By morning the presents were wrapped under the tree and the pudding was at my parent's place waiting to be boiled.  Let me tell you a little about the gifts before I indulge in my annual reflections on why my pudding wasn't perfect. 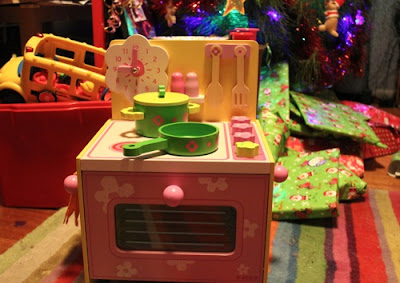 Sylvia was very pleased when she woke up to find an oven from Santa under the tree.  She was just as pleased to find he had eaten his mince pie.  It was small enough for her to drag into her bedroom to start cooking.  I think she might have stayed there all day if not for Christmas breakfast at home and a drive to my parents place for lunch.  Before lunch we opened presents. 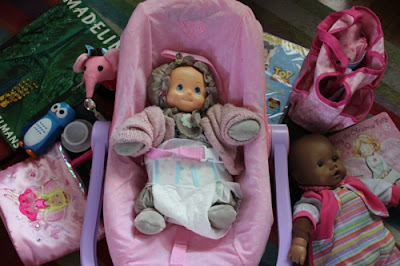 Sylvia spent the days before Christmas pondering what Dolly might get for Christmas.  Maybe a dummy?  Well there was no dummy but there was a "cradle".  (We knew it as a car basket when I was young but these days it is also known as a baby capsule.)  Dolly now has to go everywhere in her cradle.  Sylvia was also delighted with her nappy change bag, a Tiny Clanger, a new doll called Baby B, a rechargeable torch, a handbag, a tea set, books, clothes and a Toy Story DVD. 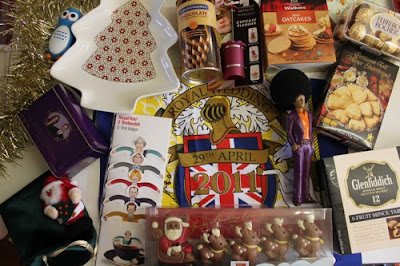 E and I were every bit as spoilt as Sylvia.  There was lot of food in our parcels this year.  Chocolates, biscuits, mince tarts, wine and royal family tea.  Books, DVDs, CDs, calendars, an apron, a Christmas tree plate and a Prince William and Kate tea towel.  And check out that disco dude scrubbing brush!

My most vexing Christmas present was a DVD of The Trip (the Steve Coogan and Rob Bryden show).  I bought it for E about a week before the ABC announced they would be screening it just before Christmas.  I then forgot to wrap it and remembered it on Boxing Day.  Fortunately E had checked the TV guides when he had considered buying it for me or we would have two copies!  The most unexpected experience was sending presents on the same day - one package got to Edinburgh Scotland in half the time it took another package to get to Orange NSW! 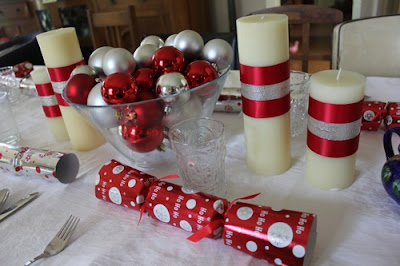 Meanwhile in Geelong, lunch was a red and silver affair.  My mum chose these colours for a stylish table setting.  I was very impressed at my dad's handiwork in fastening the ribbons to the candles.  My sister liked the setting so much that she took it home for her in-laws Christmas dinner later in the day. 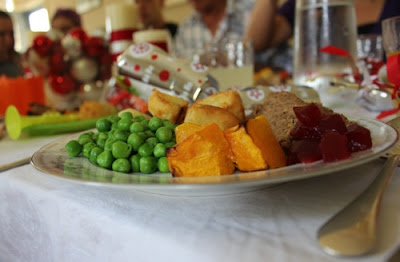 For Christmas lunch I had nut roast with cranberry sauce, roast veg and peas.  Dessert was Christmas pudding with custard as is traditional.  Plus pavlova and caramel tart for the non-traditionalists.  I made the pudding using a recipe I have been making for a few years.  Each year I learn more about making it and this year was no exception. 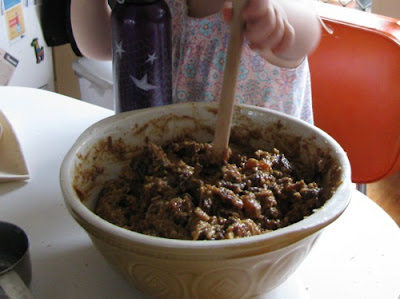 The first problem I faced this year was the dried figs.  I bought them at a small retailer and suspect they had sat around a bit long because they were so dry that they had a slight crunchy edge.  Mum had heard someone suggest that leaving the dried fruit soaking in alcohol for a week made a wonderful Christmas cake.  So I left the fruit soaking for about 4 days and by then the figs had softened.  As the fruit soaked up the liquid, I added quite a bit more booze and orange juice.  This made for a very soft pudding and I think it could have benefited from some more flour. 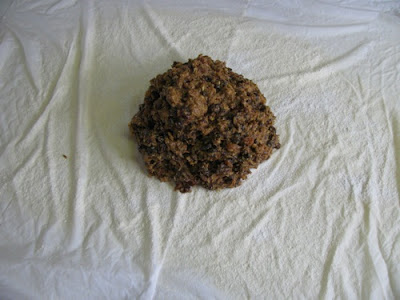 The other problem was my usual problem of getting a nice flour crust on the pudding that soaked up the flavour of the pudding.  Last year my crust was too thick.  So I eased off on the flour this year.

I didn't put the cloth in the washing machine to wring it out - instead I hung it on the line until it started raining.  I sifted flour onto the cloth and sprayed it with water to make sure it kept on the cloth.  I took the cloth off the pudding about 2 hours after it was cooked but it still stuck to the cloth.  However I was pleased that far less pudding was left on the cloth than in previous years.

The pudding flavours were intense with fruit and booze but it was a very soft one, even with my mum leaving it to dry out in the oven a little before serving it.  It is so rich that it really is only a once a year pudding.  Meanwhile the search for the perfect pudding crust continues. 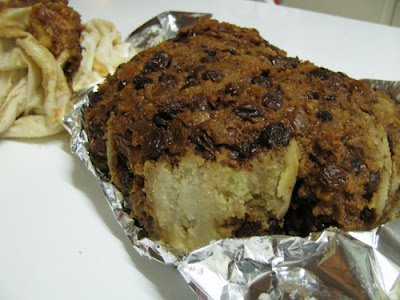 Once the presents were unwrapped and the food eaten, Christmas day was relaxed.  Outside was backyard cricket, cartwheels and E strumming his ukelele.  Inside some little girls were playing with their new Nintendo DS.  Maddy played with her new claymation film set and my dad was digging out his old records for his new turntable.  He found some old 78s, including the one I put on the stereo below which used to belong to his father.  In the evening we watched the Queens Speech and a Noel Coward telemovie, Easy Virtue. 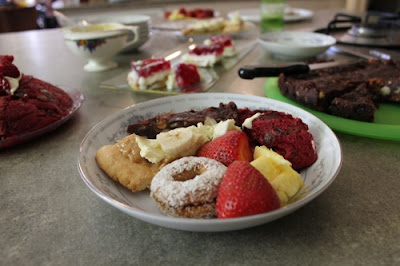 On Boxing Day morning, E and I went to see the Adventures of Tintin at the cinema.  The film was good fun and a joy to look at with its stunning scenery and retro 1930s period details.  We then caught up with my aunts and uncles at my parents place.  Lunch was a buffet of leftovers, salads and lots of desserts - summer pudding, panforte, caramel tart, jelly slice, doughnut biscuits and fruit.

We finally got home that evening to find that hail storms had passed by our place on Christmas Night and left holes in the cubby hut roof.  Just as well Santa missed the storms.

On the Stereo:
"I'm looking for a Sweetheart" sung by Miss May Loveday and Mr Ernest Pike with orchestral accompaniment (on a Zonophone record)
Posted by Johanna GGG at 12:08