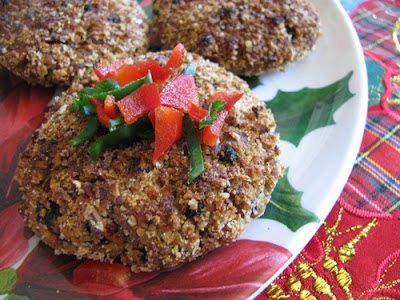 Last weekend we went to an outdoor Christmas Carols service.  I started making Chesapeake Tempeh Cakes for the picnic while Sylvia slept.  It is so lovely cooking with life is peaceful.  Then she woke and my parents appeared and it was a mad rush to get our things together.  It felt like a miracle we got there but we did. 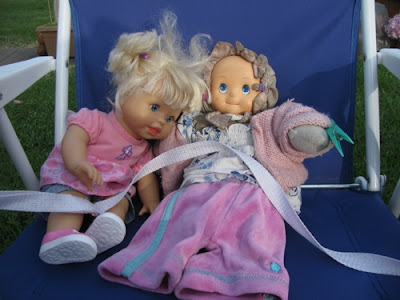 When Sylvia woke I had been rolling the burgers into balls and had dirty hands.  She took one look and advised, "if you wash your hands under water they will be clean," having experimented with just such washing at the sink quite a lot.  She watched in horror as I started to grill the tempeh cakes and a huge flame erupted on one of them.  I like to spray grill burgers with oil and grill them (ie broil them if you live in America).  The sprays seem to emit a gas that is very flammable when it comes to the grill.  Usually I am more careful.

Then my mum and dad arrived.  My dad helped to dismantle Sylvia's rejected cot to take away.  My mum was feeling under the weather but hates to stand idle so she did the dishes.  (I tried to dissuade her, honestly.) 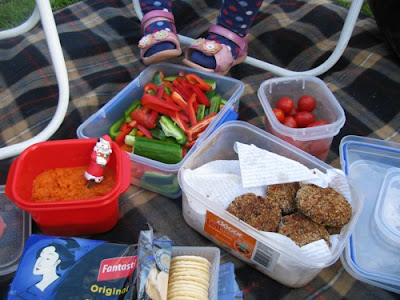 Mum and dad then came to the carols with us.  We got there just as Santa Claus arrived.  Sylvia enjoyed seeing him.  Luckily for us, she was not so interested in joining the long queue to sit on his lap.  Dad queued for sausages instead but found there were none to be had.  He made do with a Chesapeake tempeh cake.  I can't claim he was overly excited.  Yet they were very acceptable for vegan fishcakes with tempeh and nori.

We also had the smoky red pepper hummus, vegies, rice crackers, popcorn, tim tams, cherries and marzipan tart.  Unfortunately, when it was time for a cuppa tea, my mum discovered that the thermos was no longer working.  It was a disappointment because it was such a cool evening.  The carols were great, however, with a few different community choirs. 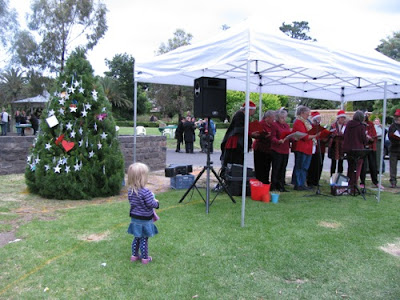 The Chesapeake tempeh cakes were great picnic food.  In fact I preferred them at room temperature rather than straight off the grill.  I enjoyed the crispy breadcrumb interior when hot but they were a bit soft inside.  Cooled, they were firmer and the flavours were more prominent.

After carols (as the rain poured down and we were thankful the washing was in) E and I discussed how best to eat the tempeh cakes.  E suggested tomato sauce and chips.  I had thought they would be good with a yoghurt sauce and salad.  Isa suggests a tartare-style sauce.  On the PPK comments, there are helpful suggestions of adding cauliflower to the mix or serving with avocado.  I liked them topped with smoky red pepper hummus both at the carols and at Chesterfield farm the next day. 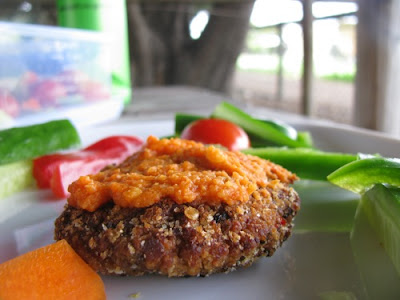 Previously on Green Gourmet Giraffe:
This time last year: Buns, soup and crunchie in yaz's kitchen
This time two years ago: Edinburgh Castle: Queen Anne Cafe
This time three years ago: Festive Shortbread
This time four years ago: How green was my mole? 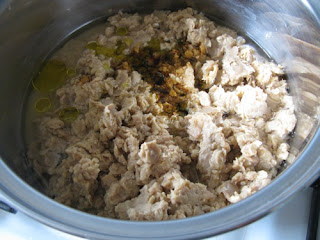 Crumble tempeh and mix with water, olive oil, soy sauce and bay leave in a medium saucepan.  Bring to the boil and simmer uncovered for 15 minutes or until most of the water had evaporated - I let mine simmer another 10 or so minutes because it was still a bit watery after 15.  Let cool slightly in a large mixing bowl.  (The recipe says to make sure it is room temperature or the tempeh cakes might fall apart but I found that the tempeh cooled a lot as I got the other ingredients together. 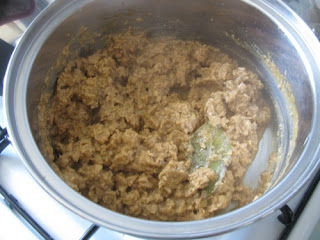 Add red pepper, nori, spring onion, mayonnaise, mustard, red vinegar, chilli paste, ginger, oregano, salt and pepper.  Stir into tempeh mixture.  Check seasoning.  Mine were very soft - possibly because I had used the crumbs of old bread rather than completely dried breadcrumbs that I usually use - so I added the half cup of rice crumbs in lieu of extra breadcrumbs but I recommend only adding them (or additional breadcrumbs) if the mixture needs firming up. 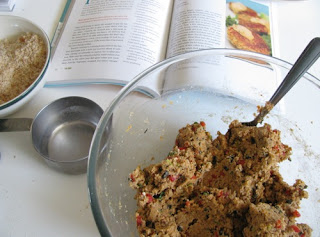 Roll into 10-12 balls and flatten each into patties.  You may need to dampen your hands to stop the mixture sticking to them.  Toss patties in extra breadcrumbs (or rice crumbs - I used a mixture of wheat and rice).    Spray one side with oil and cook under the grill for 5-10 minutes or until crisp and brown.   Turn over and spray the other side.  Cook for a few minutes, or until crisp and brown. 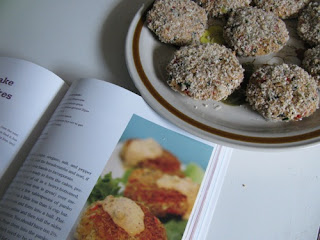