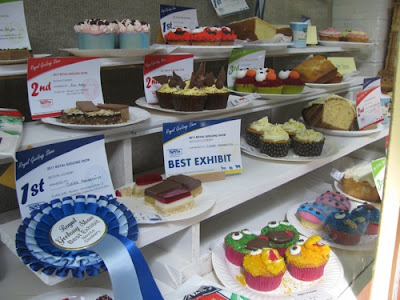 Back in October, I went with E, Sylvia and my family to the Royal Geelong Show.  We actually tried to go to the Melbourne Show but the parking was so bad that we just went to the park instead.  The Geelong Show is its regional cousin - smaller, less busy and less competitive.  Yet still filled with animals, colour, sideshows, rides, cakes, produce and showbags.  It suited us well. 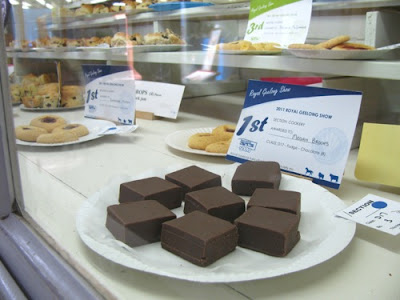 Our first port of call was the entertainment tent.  My brother was playing with his band, which has expanded to include his daughter.  We listened for a while and studied the map of the Show.  The cake display was next door.  I loved looking at all the different baking.  Cakes, slices, scones, breads, biscuits, fudge.  It is like taking food blogging offline.  And it is fun to see who got the prizes. 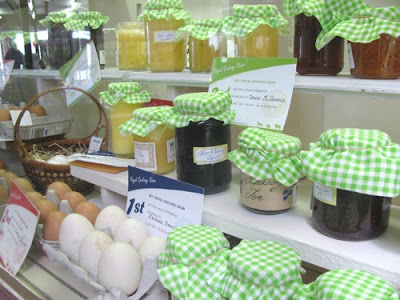 Or at least it is fun for those of us without a vested interest.  My mother was looking at the egg display when she was heard an old guy nearby muttering in outrage at the eggs that had been chosen for first prize rather than his eggs.  He then told her all about it and took her off to see his artwork. 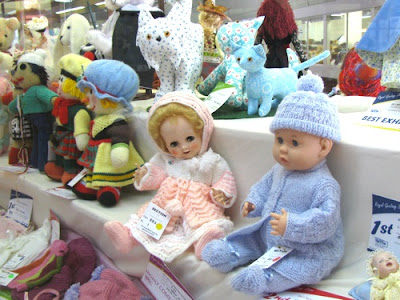 The cakes were in the same shed as the craft displays.  While I looked at the baking with a practiced eye, I can only admire the skill of the craftspeople.  I dabble in a little knitting but I could never contemplate creating intricate clothes and cute little toys.  The art was also quite interesting - some beautiful painting and some bizarre ideas.  We were most amazed by the painting of golliwogs and Ned Kelly. 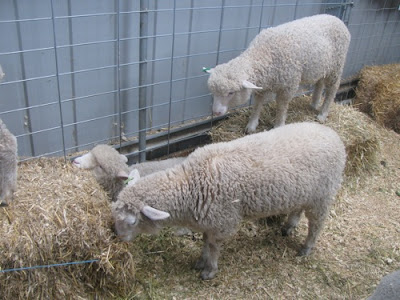 Next we went to the animal nursery shed to see the baby animals.  Sylvia loves animals but is not keen on getting up close.  She was more comfortable with the basket of freshly sheared wool rather than the live sheep and lambs.  We watched other kids eagerly feeding bottled of milk to the lambs.   We also saw calves, kids, chickens, horses and donkeys.  My favourite moment was the chaos and squealing when a piglet escaped. 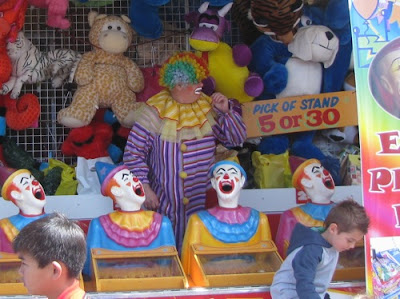 Having seen the agricultural side of the show, we decided it was time to venture into the fun fair.  Great for those willing to pit their skills against the laughing clowns in search of cheap prizes.  Not the place for those with a fear of clowns.  We were there for the ferris wheel.  I have no stomach for the upside-down-throw-me-around sort of rides but I love the gentle ferris wheel with the birds eye views.  I was surprised at my nieces' fear on the ferris wheel but my little nephew Cooper was having a great time. 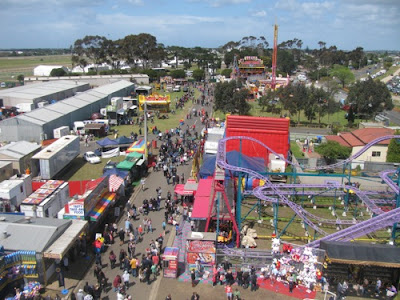 By now we had worked up a hunger.  There were all the usual chips, burgers, baked potatoes and pies.  I was excited to see a sign for Vegetarian Pad Thai.  While it was awkward juggling the plate and E's samosas, it was a great lunch.  Rice noodles, bean sprouts, egg, carrots, spring onions and a spicy sauce.  So much more satisfying than the usual carb fest. 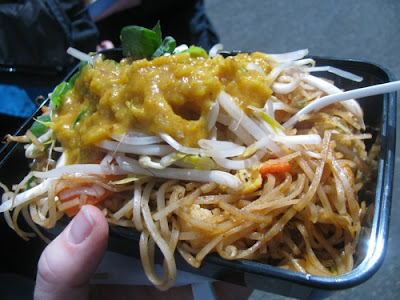 For a little sweet something, I bought a cinnamon sugar pretzels from Bretzels Biz.  These are chewy and not too sweet.  I shared it with my siblings and E and Sylvia.  We all just had a bite each.  Perfect.  (Reminds me of my childhood of one can of coke and seven straws!) 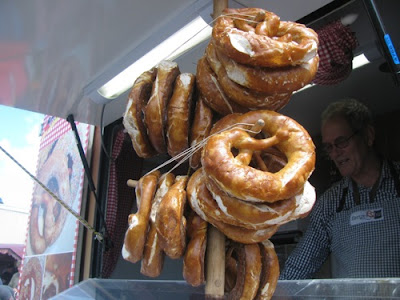 We then headed into the produce shed.  This was where people displayed the goods from their garden.  Lots of flowers, fruit and vegetables.  E and I spent a lot of our time in the this shed chasing Sylvia about.  One of my favourite exhibits was the pretty displays of rhubarb. 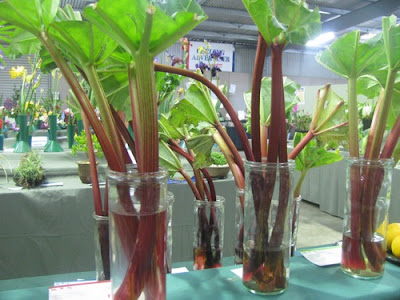 There were lots of displays of individual fruits and vegetables - lemons, broad beans, cauliflower, beetroots.  But most pleasing was the presentation of baskets of produce.  I think my siblings thought I was a little crazy to enjoy photographing so many vegetables.  But I can assure you that remembered to photograph some of the people with me too. 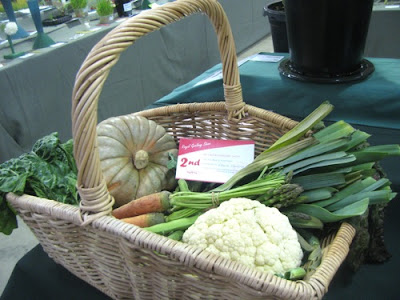 Inside this shed were also food and beverage manufacturers - lavender, a chocolate fountain, olive oil tasting, and Ned Kelly Red wines.  Who could resist such a quirky label!  We bought a bottle of the wine spritzer for my dad's birthday, which fell on the same day as our visit. 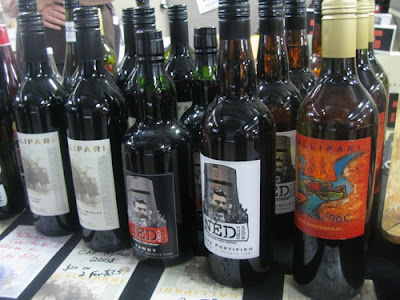 My very favourite exhibit was the little sculpture of local hero, Cameron Ling (Geelong footy captain), morphed into global cultural icon, Ronald McDonald.  For those who don't know, Cameron Ling has red hair.  He might even be looked up to by the children of Geelong more than Ronald McDonald. 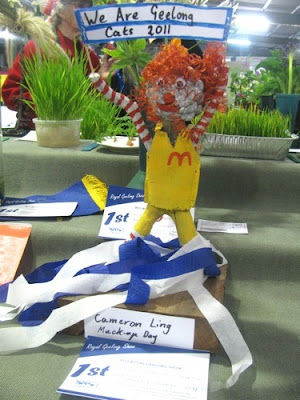 Lastly, I couldn't leave without a showbag.  I still have such fond memories of showbags as a kid.  They were full of yummy lollies and fun novelty items.  My favourite novelty gift was a cardboard cutout scene of a superhero flying across a [cardboard] rope to rescue a damsel in distress.  Not very PC but lots of fun to make his fly across the rope over and over again.  These days showbags seem so much more commercial and expensive than I remember.  Yet they still retain a certain allure.  We got a couple of cheap ones.  Below is the caramello koala bag with chocolates and a giant pen. 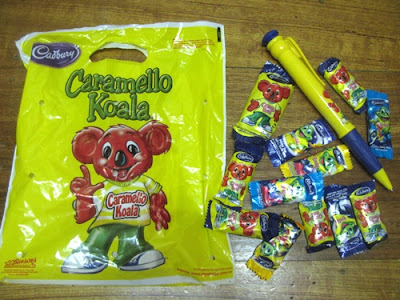 We left the show accompanied by the sound of very noisy cars in the main arena.  Back at my parents, my nieces and nephew were excitedly inspecting the contents of their showbags.  Sylvia loved her new oversized pen.  The day ended with chocolate cake for my dad and backyard cricket.
Posted by Johanna GGG at 22:04