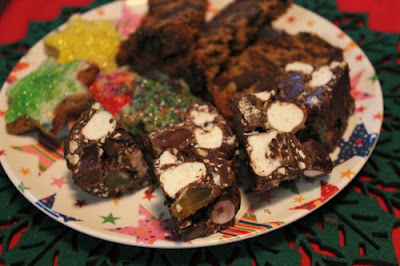 I tried making vegetarian marshmallow (from a packet) at home for the first time this year.  It was very soft and when I tried a little rocky road with the remains, it melted and was a mess.  I was wary when I found Dandies vegan marshmallows at Radical Grocery but excited too.  Another chance at rocky road.  I had particularly fancied trying Lorraine's Rocky Road with Turkish Delight and cranberries. 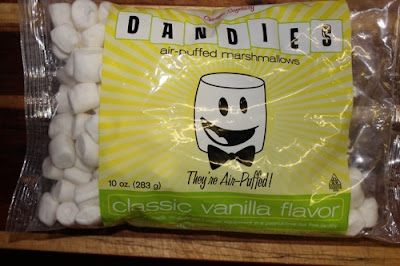 Just as well Lorraine had lured me with the hint of eastern promise.  I also came across a rocky road recipe with raspberry liquorice.  I wanted to use it, but it is not gluten free and I had decided to take some down to my family.  I considered raspberry jubes but they have gelatine in the end returned to turkish delight which was both gf and veg*n. 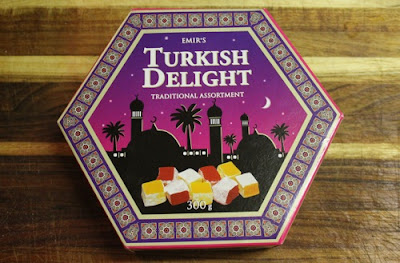 I also added shredded coconut which I love and chopped almonds for the nutty factor.  I would have used chunky nuts if not for choking risk with kids.  Peanuts were out because Sylvia is allergic.  Seems it is not easy to make a traditional rocky road with my family.  Doesn't mean it can't be delicious. I was relieved the that Dandies didn't disintegrate in the melted chocolate like the Angel Food marshmallow.  But they set quickly and got "rocky" rather more quickly than I expected. 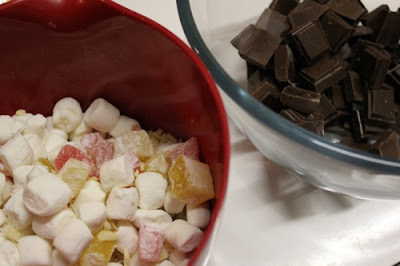 I made the rocky road on Saturday night.  It was fairly quick.  Sunday morning we headed off to a birthday party for Sylvia's neighbour.  It was at Coburg kidzone play centre and I was really impressed with their flexibility in catering for dietary restrictions.  The amazing Vanilla and Carob Castle Cake was made by a friend, Catherine of Cate's Cates who has posted the recipe.  Isn't it just what every kids wants on their birthday! 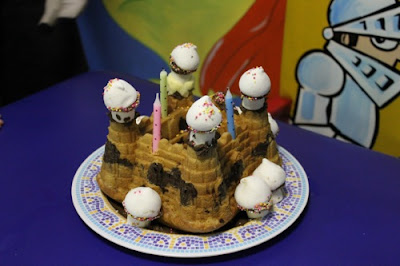 We went home and stopped long enough to chop up the rocky road.  Then we headed down to my parents' place in Geelong to help decorate their Christmas tree.  It was the usual scene.  The tinsel was missing and we have to put on lights, tinsel, decorations in that order.  Luckily it was found before we had to do something drastic like change our traditions.  My mum was the grumpy onlooker.  My dad got out the ladder and chairs so we could reach the higher branches.  Sylvia and her cousins had fun hanging the decorations on the tree, but lost interest before it was all done. 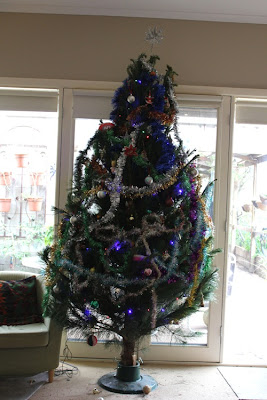 We had a simple bbq lunch but had lots of chocolate goodies for afternoon tea.  As well as my rocky road, mum had made GF brownies and GF hedgehog.  She had also made some ginger beer that had the most impressive fizz when anyone opened a bottle as my dad found out.  (E had to take one of the bottles she gave us into the backyard and wait for it to finish fizzing.) 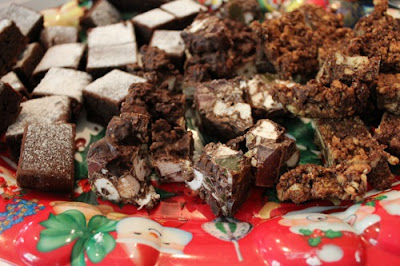 Finally I decided to take some of the rocky road and pieces of the Chocolate and Fig Fruitcake to work for some festive treats.  Most people enjoyed them, especially my colleague who took a piece of each to have for later because he was caught up with other stuff.  I am really pleased to have finally made some rocky road.  It isn't easy to buy the dandies as I don't get to Radical Grocery too often but I am sure I will be making it again some time.

I have more Christmas photos (hey I have a new camera!) that I hope to share tomorrow.  Meanwhile here is one of Sylvia's new toys bought for her by her father.  Dracula, or as he is known, "Drac" not only had eyes with a scary glow but also a scary laugh.  Sylvia loves him though her friend over the road found him scary.  Oh dear! 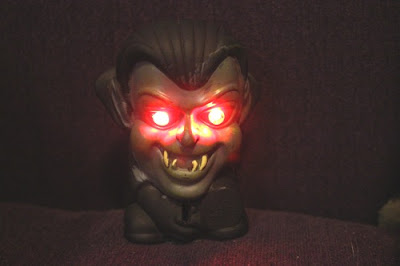 Scary toys aside, it is Christmas craziness here.  I am now off to make fruit mince for panforte.  More baking will follow tomorrow.  E has just rushed to the post office to collect a parcel before it closes so we are looking forward to listening to Dr Demented Christmas hits.  We are also planning to watch Peppa Pigs Christmas DVD tonight now that I have been back to the ABC Shop to get the security tag removed.  Then some wrapping of presents tonight.  Hope you are enjoying this Christmas and have a relaxing break ahead of you.

I am sending the Rocky Road to Jacqueline at Tinned Tomatoes for her bookmarked recipes.  I also highly recommend you check out her NCR Festive Photos for some more seasonal cheer.

Prepare all ingredients except chocolate.  Line a 20cm square tin with baking paper.  Gently melt chocolate (I did this in the microwave - I think it only took me about 1 minute and quite a bit of stirring so that a lot of the chocolate melted out of the microwave and didn't get too hot).  Pour chocolate over remaining ingredients and gently stir.  Pour into prepared tin - work quickly as it doesn't take long to firm up.  Let set in fridge until hard.  Slice into squares.  We kept ours in the fridge but I think it could be kept at room temperature if you are not in the heat of summer.

On the stereo:
Images: the best of Jean Michel Jarre
Posted by Johanna GGG at 17:42