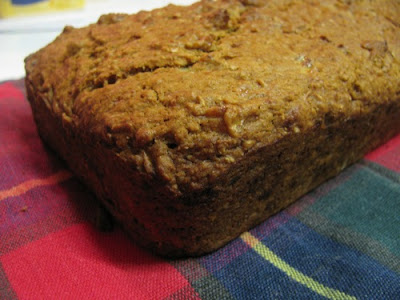 I caught a whiff of over-ripe banana while eating dinner.  Time to make banana cake.  I had plans for a fancy cake but no energy.  Instead I creamed the (vegan) butter and sugar.  Then I put Sylvia to bed (which is taking some time this week), watched excellent Australia drama (The Slap) and then finished off the cake.  By the end of the evening I had eaten a piece covered in Nutella. 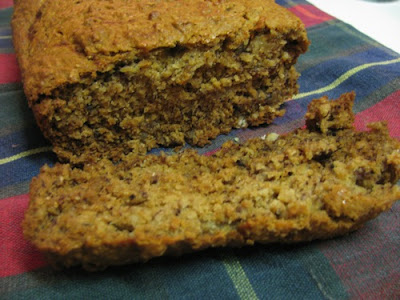 It was a vegan banana cake recipe in my notebook from my student days.  I don't think I have ever made it before.  It appealed for its simplicity.  Then I complicated it.  Only a little.  I halved the sugar and made it brown sugar, used maple syrup instead of water, left out the vanilla and added some walnuts.  It tasted quite caramelly.  Soft, slightly stodgy, and quite sweet, and quietly satisfying.

We have been enjoying it today for snacks though it is facing harsh competition i the way of nectarines, which have just come into season.  Bananas are finally coming down in price again after Cyclone Yasi.  So we may start to take them for granted again, but it means that banana cake will once more be commonplace in Melbourne homes.

Cream margarine and sugar (I did this by hand).  Beat in banana, maple syrup and oil.  Gently stir in flour, baking powder, bicarb soda and walnuts.  Spoon into greased and lined loaf tin (or 20cm round cake tin).  Bake at 190 C (or 370 F) for 50 minutes or until a skewer comes out cleanly.  Cool on a wire rack.

On the Stereo:
Music for Sound Healing: Stephen Halpern
Posted by Johanna GGG at 23:36