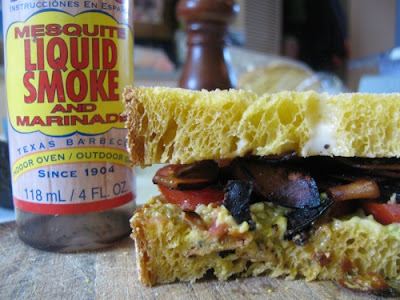 On Saturday morning, Sylvia got me up early (well at about 7am).  It was ok.  I had plans.  I had coconut flakes.  I had the remains of a bottle of Figaro Liquid Smoke.  I mixed them with some tamari, maple syrup and water.  They marinated while I got Sylvia porridge and pottered.  Then I fried the coconut flakes and made a sandwich with pumpkin bread, tomato and avocado.  It was one of the best breakfasts I have had for ages. 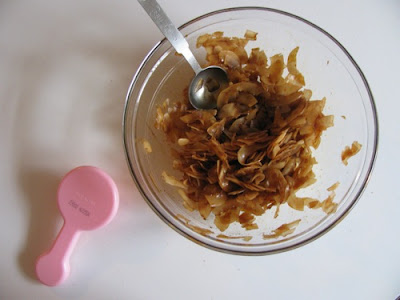 I first read about Coconut Bacon before when I made this Bean and Buckwheat Facon.  It didn't appeal.  Then Lisa (and other bloggers) raved about the CLT (Coconut Bacon, Lettuce and Tomato Sandwich) at New Day Rising.  Now I want to go there but I don't eat out much and the place looks unsuitable for a toddler.  When I saw the picture of Vegan Fox in the Snow's sandwich with tomato, avocado and coconut bacon, I had to try it. 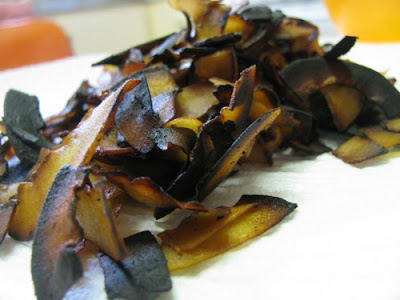 I was a bit unsure about it.  To bake or to fry? (Frying seemed quicker.)  Could I use smoked paprika given that I didn't have much liquid smoke left?  (Apparently, yes.)  Would the coconut soak up the extra marinade? (No.)  I checked a few other posts but didn't have much time for research.  So, as our lovely consultant at work advises, I got my hands dirty having a go at it. 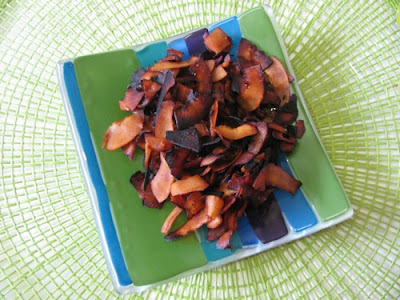 The facon (fake bacon) was fantastic in the sandwich.  It crisped up nicely and was very tasty.  It was also far simpler and quicker than many other facon recipes.  My main reservation is that it wasn't as full of protein as the Bean and Buckwheat Facon that I loved.  I have however read that you can leave it marinating in the fridge for a few days and when cooked, keep it in an airtight container. 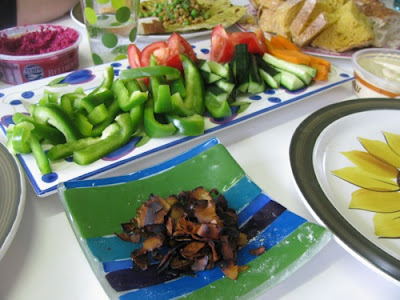 I didn't get the chance to store mine in an airtight container.  Serendipitously, my friend Yarrow, who gifted me the liquid smoke and trialed my previous facon recipe with me, came to lunch.  I was pleased to offer the facon as a snack because I was a little behind on lunch.  It kept up going nicely while we chopped, rolled and fried.  I served some pea and lentil salad with the meal.  It was wonderful with some flakes of coconut bacon sprinkled on top.  More on the lunch later.  It has been a busy weekend.  Meanwhile I have more facon marinating in the fridge and look forward to frying it up.

I am sending this coconut bacon to Ricki for her Wellness Weekends.

Mix coconut flakes with other ingredients.  I found there was a little extra liquid so I added a little more coconut to soak it up (it didn't get soaked up when I left it to marinate for a while).  Spray non stick saucepan with oil and fry over medium heat until just slightly charred around the edges.  Recipes say you can also heat in a low oven until crisp but I haven't found advice on timing.  Cool on kitchen paper.  Great for garnishing salads, soups and sandwiches.

NOTE: I bought the coconut flakes at the organics stall at the Queen Vic market in Melbourne (beside the egg stall).  They were displaying packets at the counter so I bought some on a whim.

On the Stereo:
The Love Songs of Burt Bacharach: Various Artists
Posted by Johanna GGG at 23:22