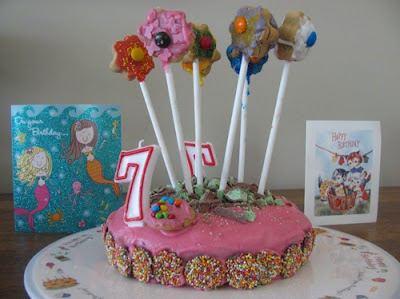 Last Sunday we had a birthday lunch for my nieces Ella and Grace.  Planning began weeks before with ideas, children's birthday cake cookbooks, online searches, consultations and hand drawn diagrams.  Pleasing twin girls is doubly challenging.  Finally it was decided to go with Grace's choice of a flower cake and to give Ella her choice next year.  Here is how we made it. 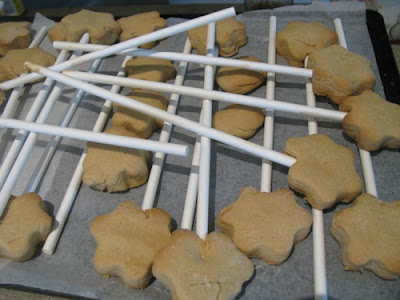 We went down on Saturday afternoon to stay at my mum's.  My nieces Maddy, Ella and Grace were sleeping over.  Not only did Sylvia get to sleep in the loungeroom with her big cousins and watch cartoons with them in the morning, but I got the chance to help my mum and the girls make flower biscuits on sticks.  We had decided to use the same GF cut out cookie recipe that we used when we made cookie wands for Maddy's birthday earlier in the year.  This time they were to look like flowers and be planted in a pink cake. 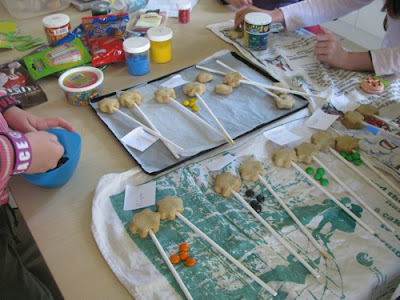 As I have said, planning was key.  We had to go down the street for edible "decorations" early in the morning.  We had trouble finding the candles in the supermarket.  The funniest moment was when my nieces started making faces and gesturing because they saw themselves on the CCTV.

Upon returning we started on the flowers.  They were the most complex part of the cake.  Firstly we decided upon seven flowers to represent the girls' seven years.  I consulted each girl on their seven colours and came up with a final seven.  We chose two flowers for each colour (I've done enough of these to be cautious and make sure there were back ups) and Maddy used her colour-wheel to choose coloured m&ms for the centre of each flower.  Complicated stuff! 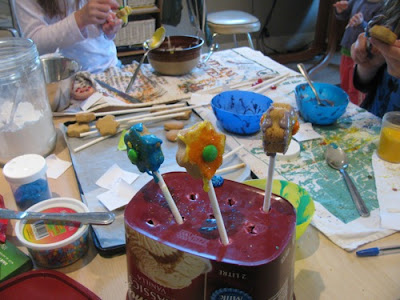 I thought that mixing up seven colours of icing was a challenge.  I decided the cake would look better from all angles if we iced both sides of each flower.  Seemed simple.  All we needed was somewhere to dry them.  My mum took care of that with a brilliant idea of making holes with a sharp knife in the bottom of an ice cream tub.

The main problem was that the icing kept sliding down taking the sprinkles and m&ms with it.  I think it worked best when we didn't have too much icing on a biscuit.  Thicker icing didn't help because it just gave more icing to slide down the biscuit.  I was determined the m&ms would stay on and just kept pushing them back into place until the icing dried enough to hold them. 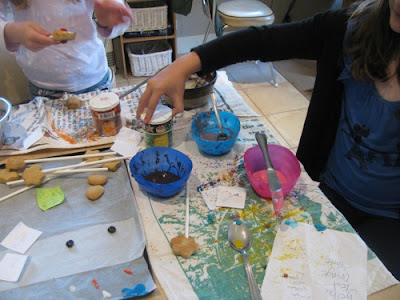 While the girls and I were decorating the biscuits (with Maddy entertaining Sylvia to keep her fingers from getting sticky with the bickkies), my mum started on icing the cake.  Despite Ella's concern that boys would not like pink, that was the colour chosen.  Grace and Sylvia helped to put a ring of freckles around the side of the cake and scatter chopped mint bubble chocolate (like aero bars) over the top.  Unlike in the Food Ideas recipe (from a Party Time lift-out), we used a gluten free Basco vanilla cupcake mix for the cake. 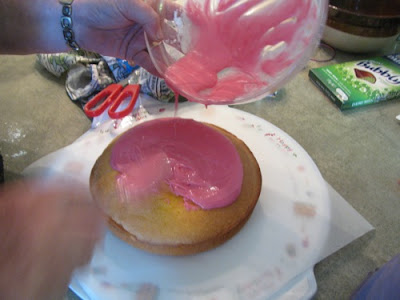 Once all the flowers were decorated and dried, we chose which flowers to plant in the cake.  Not an easy task!  Then we iced a round biscuit for each of the girls with their initial in sprinkles.  Next to each round biscuit was a number seven candle.  We lit the candles at the same time so the girls could blow out their candles together.  And despite Ella's concerns, Cooper loved the pink cake. 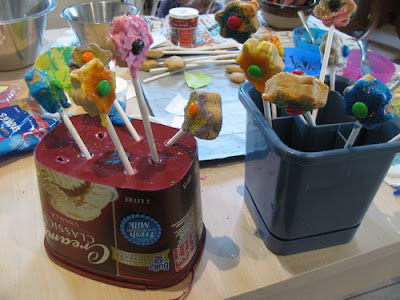 Once we enjoyed our Mexican meal and the cake was demolished, the kids had lots of fun playing with slapbands, textas and stickers.  Sylvia and Ashton played the piano.  My oldest niece, Quin, did an excellent job of painting the girls' faces with Ella and Grace's new face painting kits.  Most hilarious was Maddy in her cape with spooky face paint.  I did a strongman moustache on Cooper but he wasn't impressed with my handiwork.  All the kids sparkled.  Just like the flowers in the garden! 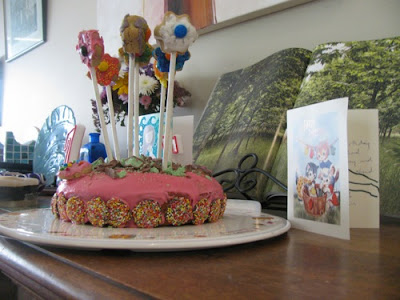