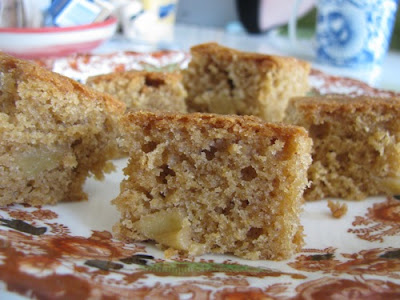 I have said before that I love the change of season.  Have I also told you that the one thing I hate about it?  Fruit has an off season.  The shadow falls when Autumn's harvest is fading and we are still waiting for Summer's bounty.  I lose my love of fresh fruit and become Little Miss Fussy.  Tinned fruit and dried fruit start to look attractive.  Right now apples and pears are no longer crisp and perky.  Stone fruit is starting to creep into the stores but it is rock hard and expensive.

Last week I was under the weather.  I wanted fruit but the three apples in my fruit bowl just did not appeal.  It was time to bake apple cake.  Some time before, I had organised for my friends Kathleen and Michael to come to lunch.  Usually when I have friends over I like to cook.  Not last week.  I bought falafels, hummus, turkish bread and vegies.  I was glad however to offer freshly baked cake. 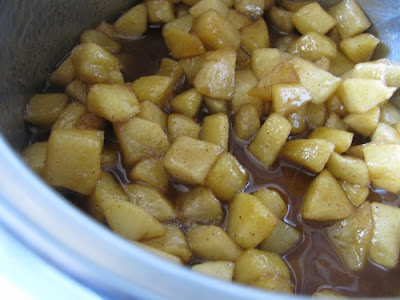 The recipe came from Choclette, who had put apples, thyme and choc chips into her cake.  Mine was plainer.  The cake was delicious out of the oven and almost better the next day.  It had a hint of caramel and was lightly spiced.  Unusually, the apples were cooked in butter and sugar before baking.  They were lovely and soft when baked in the cake.  My cake took a little more time than Choclette's and seemed to have a particularly low oven.  If I was to make it again, and I hope I will, I would like to experiment with the temperature and timing. 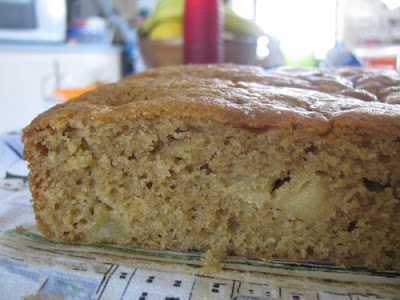 I baked the apple cake first thing in the morning before visiting a friend, hanging out washing and heading out to the supermarket.  It was easy enough to make while supervising muesli being sprinkled into bowls with dried fruit, reminding E to get up, changing a wet nappy, putting on a load of laundry, having my shower, dressing Sylvia, finding the last of the bread I had made on the weekend, finding more bread in the freezer and eating some fruit.  Easy! 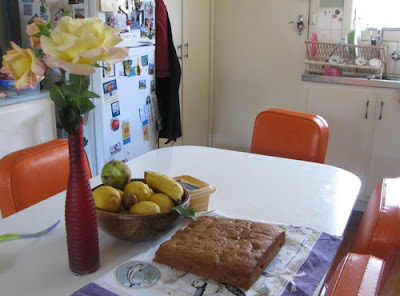 Kathleen and Michael enjoyed the cake.  I thought Sylvia wolfed down a piece but I later found it on the floor.  Then later I found her digging out the fruit from her piece of cake.  She must get that from her dad.  E liked the cake but said it would be better without apples and even better with choc chips.  I disagree.  This was definitely among the best apple cakes of the year. 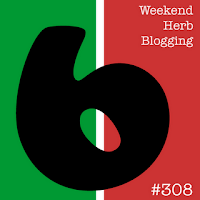 I am sending this cake to Haalo for Weekend Herb Blogging #308.  This event, which was founded by Kalyn, turns 6 this week.  Congratulations on 6 years of sharing fascinating recipes on WHB.

Gently cook apples with 25g butter, 1 1/2 tbsp sugar, golden syrup and 1/2 tsp cinnamon for 10-20 minutes until softened but not mushy.

Cream remaining butter and sugars.  Beat in eggs one by one.  (I did this by hand.)  Gently stir in the flours, baking powder and spices.  Stir through apple mixture until just combined.  Spoon into a greased and lined 20cm square cake tin (or 23cm round cake tin).

Baked at 150 C for 50 minutes (mine wasn't cooked by then so I cooked it another 15 minutes at 170 C).  It is cooked when it is golden brown on top and starting to come away from the sides of the tin.  Sit 5 or 10 minutes and then turn out onto a wire rack to cool.  Dust with icing sugar to serve if desired.

On the Stereo:
Super Trouper: Abba
Posted by Johanna GGG at 16:02