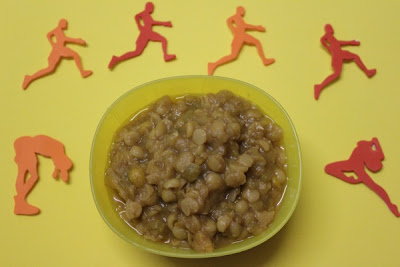 Last weekend we finally watched the Olympic Opening Ceremony, a week late.  Sitting on the couch watching the ode to British pastoral, industry and pop music while eating pizza was probably the highlight of the weekend.  The next day Sylvia had a fever and needed the thermometer, medication and cooling smoothies. When she headed to bed unusually early,  I set to work making dinner using an accidentally opened can of creamed corn and some split peas that had been in the pantry far too long. 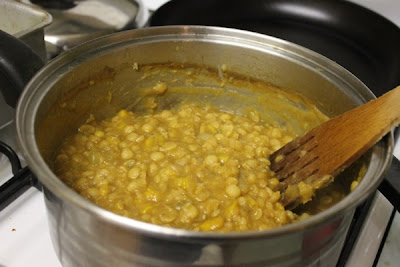 The creamed corn was destined for cornbread. My challenge was to find a split pea recipe that I could serve with it.  I don't cook with split peas that often.  Just the occasional soup.  I read a post by Janet of the Tastespace on Split pea dal with ginger and lime.  She posed the question: if you could only have 4 spices in your kitchen, what would they be?  Mine would be smoked paprika, cumin, mustard and cinnamon.  So it is perhaps a bit predictable that I went for the smoky lime flavours of Mexico for the split peas.

As Janet found, the split peas are quite watery but they thicken as they cool.  I found the easiest way to serve them was in a small bowl on the plate.  Alternatively they could be served in a bowl with extra vegies on top.  I enjoyed dredging my cornbread through the split pea stew.  This made me think, it could even be eaten as a dip with vegies and corn chips.  If you are seeking a different sort of snack for watching tv sport. 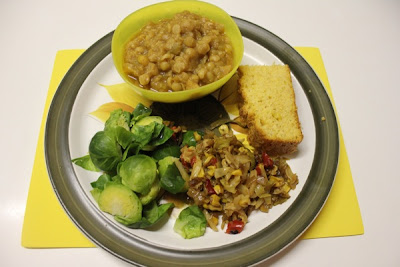 We haven't been watching much of the London Olympics.  I meant to but either I am unenthused by the Channel 9 coverage or E is watching some old movie like Zontar the Thing from Venus.  So this year I haven't really seen much sport but watching a bit of swimming with Sylvia reminded me of what a small world it is when we are young.

According to Sylvia, the Olympians were swimming at our local pool.  She has also showed me where cartoon characters Gaspard and Lisa live in the next suburb to us, and when she was given playdough by a friend, she said that my mum must have made it and given to it to this friend for Sylvia.  Apparently she thought my mum is the only person in the world to make playdough.

I understand this feeling of the world being so small.  When I was a child, I remember thinking that Daryl Somers (a local television star) and Donna Summer (American disco diva) were related because their surnames sounded the same.  I even thought the kids up the road were our Prime Minister's grandchildren because they shared the same surname.  It probably wasn't so odd, given that anyone who shared a surname in our small town usually was related.  I even remember visiting the cemetery with a friend (as you do) and finding a gravestone with her name on it.  Turned out it was her great-grandmother. 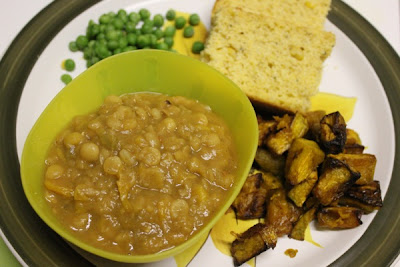 Food these days makes the world seem small too.  On the night I made the split peas, I combined the Mexican flavoured stew and cornbread with some leftover Irish-style fried cabbage and brussels sprouts.  The second night I served the split peas and cornbread with the peas and roast pumpkin of my Aussie childhood. I'm pleased to discover that these split peas, like the Olympians, will readily mingle with other nations.  It is a small world after all!

I am sending these smoky lime split peas to Ricki for her Wellness Weekends event.

Heat the olive oil in a large saucepan.  Fry the onion, celery, parsnip and capsicum for about 5-10 minutes or until vegetables are softening at the edges.  (I add vegies in that order as I chop them.)  Add garlic, smoked paprika, cumin and allspice.  Stir for about 1 minute and then add in split peas, water, salt and chilli paste.  Bring to the boil and simmer for about 1 hour or until split peas are cooked but not mushy.  Stir in lime juice and serve.

On the stereo:
The Best of Tubular Bells - Mike Oldfield
Posted by Johanna GGG at 23:44