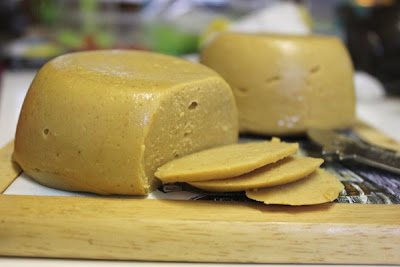 It occurred to me yesterday that it is far easier for us to experiment than in our foremothers day.  We have so many cookbooks, tv shows and the web.  I recently saw a couple of ideas for vegan cheese (or cheeze if you are a purist) on Pinterest.  I was able to read a few recipes, compare and contrast, tweak according to my ingredients, check another recipe for triangulation and suddenly I had cheese that I had made all by myself!  With a little help from my friends! 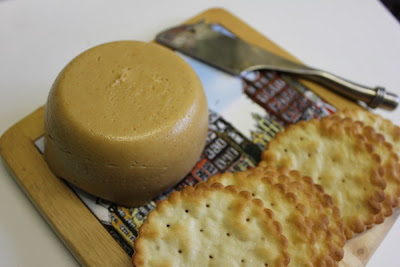 I come from a generation where there are many ways to get there, many versions, many diets, many amazing things to taste.  The more I read and experiment and stock my pantry, the easier it gets.  Yet I am still amazed I made cheese that I could grate on pizza and slice up for a melted cheese sandwich. 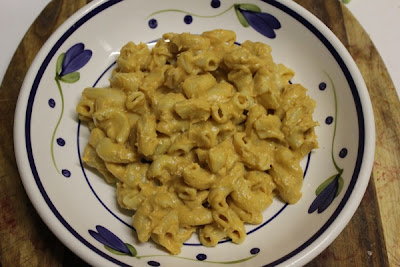 Less exciting is the Sweet Potato Pasta Cheese Sauce that I made last week.  It was very nice but not so different to hurry up pumpkin alfredo.  Probably I lost my enthusiasm after I forgot about the the pumpkin I was roasting for it.  The pumpkin chunks were burnt but fortunately I had some whole sweet potatoes in the oven too.

I was lazy and used cashew butter rather than grinding my own cashews.  I am not sure how much of a difference this made.  I will say that if you love eating a spoonful of nut butter then this macaroni cheese is for you.  It may even trick your nearest and dearest.  Take this conversation with E as I finished my bowl of pasta:

GGG: Vegan food is so satisfying.
E: But I thought you said it had cheese in it.
GGG: no I said it tasted cheesey when I was talking about how good this vegan food was.
E: Oh, I probably wasn't listening!
GGG: hurrumph! 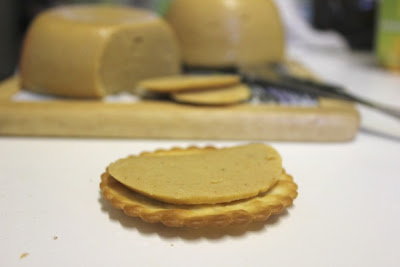 I could have probably fooled E with this vegan cheese too.  Yet I was so excited telling him I had made my own cheese and it was vegan.  It is not the first vegan cheese I have tried.  But it was far closer to the sorts of cheese I regularly eat and much quicker.  My previous attempts at cashew goats cheese and almond feta made me happy.  It's just that they took forever to make.  They involved days of soaking, grinding and draining nuts.  I started this cheese at 4pm and was grating it onto pizza at 7pm. 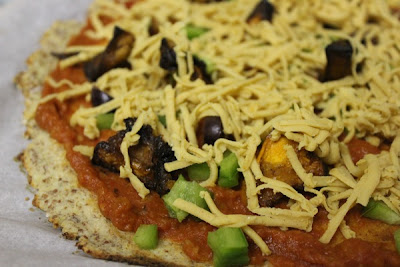 I had been really excited last year when I first saw Veganangela's Cheese.  Recent sightings of vegan cheese on Magic Jelly and Sweet Roots piqued my interest.  Home made vegan cheese that slices rather than spreads were still a mystery to me.  Yet the ingredients list was mostly already in my kitchen.  I combined the recipes to suit what I had.

I worried that I don't tend to use coconut oil.  It is perfect for cheese that you want to firm up at room temperature and melt under heat.  My ingredients seemed to need some extra fat.  Instead of coconut oil,  I used tahini but I think you could use cashew nut butter or white miso.  And here is the dilemma with this cheese.  When I compared grated dairy cheese and grated vegan cheese on pizza, the dairy swims in oil.  It is not something I really want but I think it helps the melting. 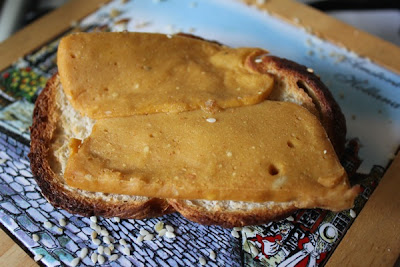 My first experiment with the cheese - apart from a slice on a garlic cracker (which Sylvia inexplicably calls pumpkin crackers) - was pizza.  I was impressed at how easily the cheese grated.  I was disappointed that when the pizza came out of the oven, the strands of grated cheese retained their shape.  The pizza tasted good.  In fact when I asked E if he wanted more dairy or vegan cheese pizza he wasn't sure. (Maybe I could have fooled him with this cheese!)

So today I had to try a staple of our house.  Melted cheese on toast.  (Or in this case, on pretzel.)  It didn't look good.  Again it held its shape.  But when I bit into it, the cheese oozed. 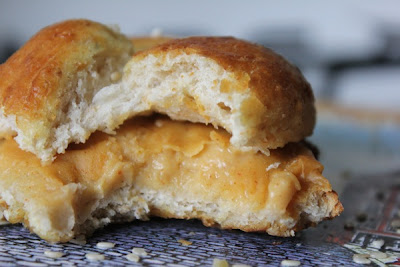 My next challenge is that I would like to bake with the cheese.  Not sure what.  Crackers?  Muffins?  Quiche?  The cheese is not perfect.  It is cheesy but would it really fool anyone if I did the comparison?  The colour is more orange than yellow.  Is that because smoked paprika makes everything orange?  Are the flavours too strong?  I would like to experiment more and hope I will.

I am sending this post to Ricki for her Wellness Weekends Event.  Fitting really, as it were her pinterest pins that inspired this cheese.  Thanks Ricki!

Dissolve apple cider vinegar in 1 cup of soy milk in medium saucepan. Set aside for the milk to curdle.  Meanwhile dissolve agar powder in remaining cup adding a little milk at a time (I did this with only 1/4 of the milk as the recipe suggested but it made the agar agar really thick and lumpy when I added it to the mix later so maybe I would try adding the whole cup to the agar agar next time.)  Set aside. 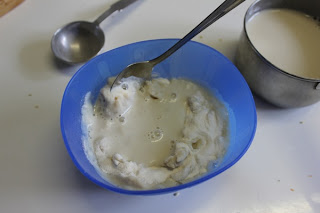 Add smoked paprika, salt, nutritional yeast flakes, turmeric, and cashew butter. Gently bring to the boil (you can add ingredients as it is warming up). Then add soy milk with agar agar and cook for 2-3 minutes to allow agar to dissolve. 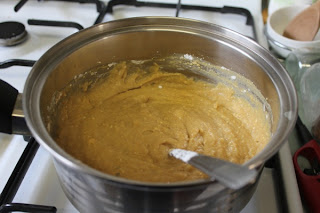 Add flours and gently simmer, stirring contantly until it thickens like a roux and is coming away from the sides of the saucepan. Magic Jelly urged readers to use a stick blender to blend the mixture but this seemed quite messy.  Instead I stirred it as vigourously as possible to give it a glossy sheen.  Above is the graininess of the mixture when first coming together compared to the below glossiness. 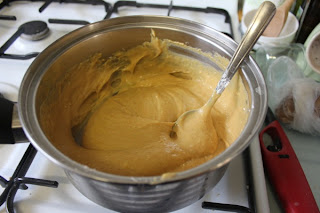 Pour into a lightly oiled container (or two ramekins like I did) as soon as possible. You can see in the below picture that even with pouring it when hot, it was starting to set as I scraped in the last few bits into the right hand ramekin. 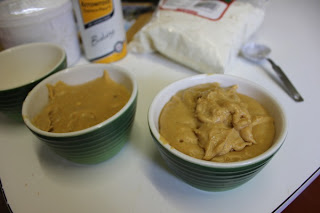 Let cool at room temperature.  I found that within 2 hours I could grate it.  Unmould and keep in an airtight container in the fridge.  (Magic Jelly says it will keep up to a week.)

Cook and drain pasta according to packet instruction (I simmered mine for about 10 minutes).  Mix together the rest of the ingredients.  Add more milk if needed.  It should be of a thick pouring consistency.  Mine was a bit thick and I used 1 and 1/3 cups of milk.  Toss through hot pasta.

On the Stereo:
Big Red Truck: RubHer
Posted by Johanna GGG at 23:55