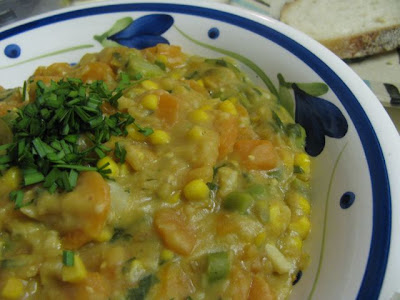 It was a leisurely weekend with very little cooking. On Friday E has bought me a Smiths compilation album. It was on the stereo a lot over the weekend. “Heaven knows I am miserable now”, I sang along, reliving my student days while I fed Sylvia her breakfast. She just laughed. 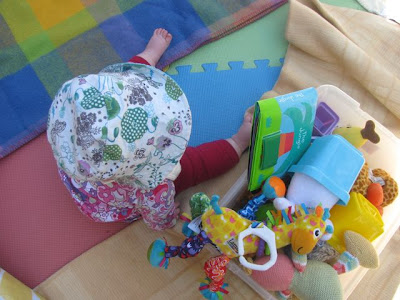 After all our spring rain, we had plenty of sunshine. Saturday found us indulging in some leisurely reading in the backyard in the sun with Sylvia on some foam mats and rugs. Zinc basked in the sun. It was a day for drying washing, hunting out sun hats and watching the bees humming about the flowers on the lemon tree. Not a lot of time for cooking dinner. 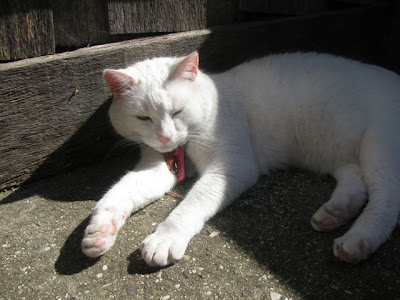 I had to make up a puree for Sylvia so I extended this into our dinner. Just lots of vegetables that were extremely sweet before adding seasoning. It wasn’t great until I offloaded some unsatisfactory garlic and herb cheezly (vegan cheese) into it, which made it thick and tasty. You can substitute cheddar or parmesan if you don’t have unwanted cheezly but the chowder will be more gloopy, rich and full of cheese strings . I tried a spoonful of soyatoo soy cream but it was so sweet that I wouldn't recommend it. 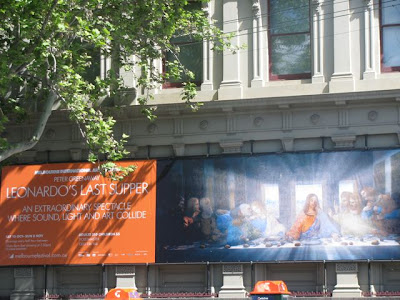 On Sunday it was the last day of the Melbourne International Arts Festival. There has been very little energy for browsing the program in our house and even had we wanted to see some shows, they would have been sold out before we managed to think about tickets. Determined to see a festival show, we headed out to the Peter Greenaway’s light and sound show interpretation of Leonardo’s The Last Supper in the North Melbourne Town Hall. This was an intense experience with insistent cellos and vocals on the soundtrack and fast flowing changes in the way the picture was viewed through use of light. I particularly liked the close ups of flecks of paint on the canvas that were a veritable nanno landscape. 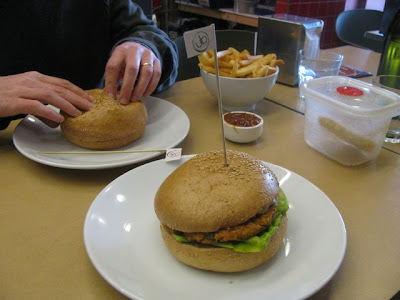 Consistent with our inability to organize ourselves to go out lately, was our unfortunately timing with the nearby Auction Rooms café where I wanted a bite to eat. It closed just as we arrived. So we went up the road to The Urban Burger. My burger was ok but a little heavy on the sauce and light on vegetables. E really enjoyed his beefy burger and the burger meister was charmed by Sylvia. I wasn’t too concerned about the lack of vegetables because I knew I had a chowder full of vegetables waiting for me at home. It was even better the second night. 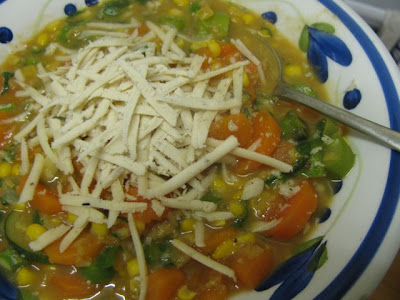 Place onion and ½ cup of water in large stockpot and bring to boil. Simmer gently while chopping carrots and potato. Add carrots and potato and 3 cups of water. Bring to the boil and simmer for about 5 minutes (I simmered for about 15 minutes but I don’t think it was necessary to do it so long). Add sweet potato, corn and lentils. Simmer an additional 5 minutes.

If you are also making baby food, scoop 2 cups of soup into a separate saucepan, add ½ cup water and simmer another 10 minutes or until the vegetables are soft. Blend and store in small serves in the freezer (I use iceblock trays). If there are no babies to cater for, just keep on making the soup without removing any of this puree.Add vegetable stock, salt, cayenne, smoked paprika, garlic and zucchini to the stockpot. Simmer 5 minutes. Add asparagus and simmer another 5 minutes. Stir in parsley and cheezly or cheese. Serve in bowl with chives sprinkled on top.On the Stereo:
The Sound of The Smiths: The Smith